Image’s latest quirky mini-series has been getting quite a lot of hype over the past few months, but will it prove to be every bit as electric as its protagonist, or is it going to short out? 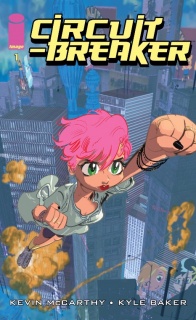 When the heroic robots that saved Japan during World War IV are outlawed, they turn against mankind, waging a campaign of terror across the last city on Earth. Their creator builds one more solider – disguised as his teenaged granddaughter – and tasks her with dismantling the marauding mechanical militia. But as she begins to question her programming, will she be the last hope for humanity, or the final nail in our coffin?

Robots. Since Asimov raised the complex moral issue of mechanical indentured servants (and probably before, I’m not the one with a digital memory here) popular culture has been fascinated by shiny metal slaves and their inevitable uprising. “Circuit Breaker” #1 is the latest in a legacy of literature aimed at examining imagined tensions in a world where humans and sentient machines exist side by side but, while Mccarthy and Baker’s new book may stem from the same roots as Asimov’s “Robot Series”, the result is a unlikely to shake the foundations of AI dialogue in any meaningful way.

There is an instantly recognisable formula in “Circuit Breaker” #1,  a front loaded, exposition heavy introduction that attempts to acclimatise the reader to the heady world of the pop-culture guzzling ‘super-metropolis’ of a post-robot uprising Japan. It’s as though McCarthy is worried his readers are going to be lost without constant reminders of the status quo in his ‘Brave New World’ (one of many throwaway references made in this issue to other, tenuously related literary dystopias). The landscape of “Circuit Breaker” is so instantly recognisable, especially to anyone who’s seen The Animatrix, that the constant attempts to explain the world at large feel  distractingly unnecessary.

McCarthy has revealed in multiple interviews that “Circuit Breaker” is the culmination of years of work and innumerable influences. The latter, at least, are worn very much on the book’s sleeve from the very first page. If Baker’s purposefully simplistic, Saturday morning anime style artwork wasn’t enough, there’s a Hitchcockian cameo from Astro Boy and Professor Ochanomizu to hammer home manga great Osamu Tezuka’s influence. As previously mentioned, there’s a definite feeling of the social and cultural unease of robots living amongst us that’s been explored before in I. Robot, and the later Matrix material, and Chiren’s feeling of isolation for being different is such standard teen angst-filled fare that it barely qualifies as a characteristic by this point.

But the sheer range of cultural touchstones involved in this first issue combine to make it feel, tonally,  confused overall. There’s a definite Saturday morning cartoon vibe, mixed with the gung-ho fight propelled narrative stylings ofvshows like Power Rangers and VR Troopers. But these more childish elements are undercut by a more serious side, including the kind of action-heavy citywide destruction that characterises Kaiju cinema, and a bumbling service robot repurposed as a suicide bomber who releases Sarin gas on a packed commuter train, killing dozens of people.

This rather wanton destruction continues throughout the first issue, as Chiren faces off against a huge gleaming automaton called Fortinbrass who was pulling the strings behind this attack. Baker’s manga infused artwork is probably at its most enjoyable while there’s action going on. He stages a pretty solid fight sequence, dynamic and engaging on first flick through, and with some cute little additions (like Chiren’s chibi backpack reacting with emoji-like expressions as she’s put through the ringer) manages to make this fight probably my highlight of the book. that being said, there are some questionable proportions throughout this book, and while Baker pays reasonable attention to the figures of Chiren, Michiko, and Fortinbrass, some of the secondary characters feel rushed and rough, their faces and bodies sometimes distorting like anime transition frames.

I’ve read this issue a few times now, but I’m still not sure what McCarthy is aiming for as far as overarching narrative is concerned. The Robot/Human divide is often used to explore tension between races, colours, or creeds, with a safe Sci-Fi distance, and in an interview with CBR, McCarthy said that Chiren’s story will explore that element in later issues, including attempting to dismantle a faction of radical robots bent of human destruction. However, as far as issue #1 is concerned, that social commentary seems difficult to picture in any meaningful terms. All the characters on display so far seem worryingly thin, and there’s nothing that feels unique enough about this book to elevate the story its telling much above the hordes of other, similar Sci-Fi narratives that have come before it.

It’s possible that later issues will unfold to display something more concrete, either in terms of social discussion or simply more satisfying bot-on-bot carnage, but for me, this first issue feels, much like its protagonist, an awkwardly constructed simulacrum of two separate concepts.

Final Verdict:  3.4 – Busy and yet bland, the well-trodden world of “Circuit Breaker” is instantly recognisable and just as forgettable.