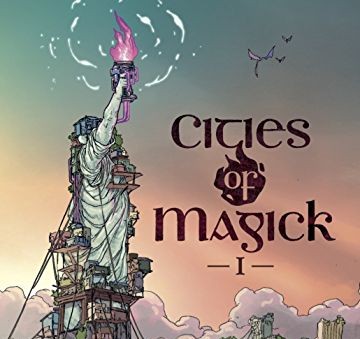 Co-creators Will Tempest and Jakob Free are certainly living up to their last names, because “Cities of Magick” #1 feels like an expressionist storm of a story, drawing from steam-punk, sci-fi, fantasy, throw-everything-at-the-wall influences. It’s unclear exactly what kind of comic this is so far — sweeping epic, satire, character study, world-building aesthetic eye candy. They’re all possibilities, but most of that’s latent for now. We’ll dive in shortly, but the vibe we get so far is that “Cities of Magick” has a lot of heart and plenty of vision, but lacks just a little clarity and focus. It’s hard to pinpoint, but hopefully we’ll get closer to the answer by the end of this review. 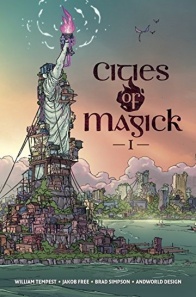 Cover by Will Tempest

This is the Age of Magick. The Age of City-States and Magick Gangs and the Post-Post Apocalypse. Our hero, a cowboy named Lev, strolls into Old York City looking for something no one’s ever seen before. He’s picked a bad time. The forces of Hyper-Priestess Isimar Rothschild, the Queen of the Chicago Conglomerate, have attacked Old York. The only person who stands in Isimar’s way is Gregor Steiner, leader of the Red Double Xs, the magick gang that protects the city from foreign invaders.

Lev didn’t come looking for a fight, but that doesn’t mean he isn’t prepared for one. Caught in the midst of a decade-old war between two powerful gangs, Lev has to figure out where his loyalties lie, if he has any to speak of. And he has to do it all quick-like…

“Cities of Magick” #1, perhaps because it knows it’s content is a tall order, starts off with a little bit of stage setting and world-building. So, what do we know about “Cities of Magick”? 150 years before the story started, we’re told something apocalyptic happened: “everything turned off.” With small, panel sized vignettes, we get a window into this great turning off, and it’s the usual doomsday fare of women screaming, planes crashing, and that sort of thing. Maybe this is small beans, but it would have been nice to have a less generic destruction event. No need to show off all the magic, but something a little spicier could have gotten us hooked on “Cities of Magick” sooner.

The great turning off was paired with something far more sinister: the arrival of “The Nexus”, which we see first as a great purple energy envelope that slowly drips across the world, starting at the north pole in a massive storm. In the next few panels we see humans traversing a frozen wasteland (probably the north pole?), until they find an alien looking temple (really, it looks like something out of AVP) until they come across what looks like a giant lava lamp. The lava lamp spits some kind of viscous lightning, and the travelers to the north are suddenly infused with magick, which they then use to heal the sick, purify water, and build (somehow?) similar looking lava lamps across the world, spreading magick which also leads to freaky mutations. The last few panels of this world building sequence show a deer eating some magick infused shrubbery, and two panels later blue centaurs doing their best Andalite impression are prancing through the underbrush under a purple sky.

This is all…fine? Look, as far as apocalypse to societal rebirth narratives go, comic books have pretty much done it all. Destruction and renewal by cosmic lava lamp is far from the goofiest thing out there, but what gets in the way here is the fact that the imagery doesn’t feel cohesive, part of a unified origin story. The visuals are just a little clunky. The visual representation of magick, a white, not-quite electric stream, doesn’t feel powerful enough for what it does to the world. The lava-lamps lack the kind of intimidating, esoteric alien architecture that would give off a befittingly all-powerful, life altering energy. Instead, they look kind of like Starcraft or Red Alert RTS doodads. Also, given the calamity that happens, it seems a bit odd that a search party, all in glossy jackets straight out of a climbing ad, make their way to the Nexus temple looking relatively unscathed. Maybe there’s an in-story reason for this, but a grittier look would have helped sell the idea that humanity is in shambles. Again, none of the stuff in “Cities of Magick” #1 are irredeemable, but it’s certainly a little ersatz. Further issues could clean things up, and first issues of such big stories are often messy and unfocused, so there’s still time for “Cities of Magick” #1.

The rest of the plot for “Cities of Magick” #1 can be found in the blurb, so we won’t dwell on it too long. One thing that “Cities of Magick” #1 has going for it, though — it’s pretty funny. The bit where Lev, our protagonist, searches far and wide for a pair of sneakers with a Nike Swish on it is pretty entertaining.

While we just took some time to talk about the curious artistic decisions on the front half of “Cities of Magick” #1, the art itself is pretty good. While we have some qualms about the world-building, that will have time to develop. The character designs in “Cities of Magick” #1 are one of its strongest aspects. There’s a good mix of humanoids of various shade and size in this world, and they’re all rendered well. The characterization in terms of dress is also strong, and here we get a sense of the ragtag, pseudo-medieval, semi-steam punk look that seems as if it would actually fit this kind of world. The villains look a little goofy, but also intriguing enough that we’re interested in their lore, and that’s all we could ask for. In sum, “Cities of Magick” #1 does its best “Echolands” impression, which sometimes works and sometimes feels a little ragtag. This could all be a matter of taste, and that’s part of being bold. Not everyone will love it, and while this one might not get our shining endorsement (yet), we’re looking forward to when it gets there!

In future issues, we’re hoping that “Cities of Magick” coalesces around its lore, and finds its direction. Right now, it feels perhaps a tad more comedic than it intends to be. We hope that future issues iron this out, and continue to give us likeable, fun characters, because that’s what’s keeping us in “Cities of Magick” #1 so far. With a little elbow grease, there’s no reason why the creative team behind this story, that has no lack of ideas and a seemingly large well of passion, couldn’t pull this off.

Final Verdict: 6.7. Visually compelling but nevertheless a little incohesive, we’re hoping that future issues of this story find its footing and live up to the potential in its premise