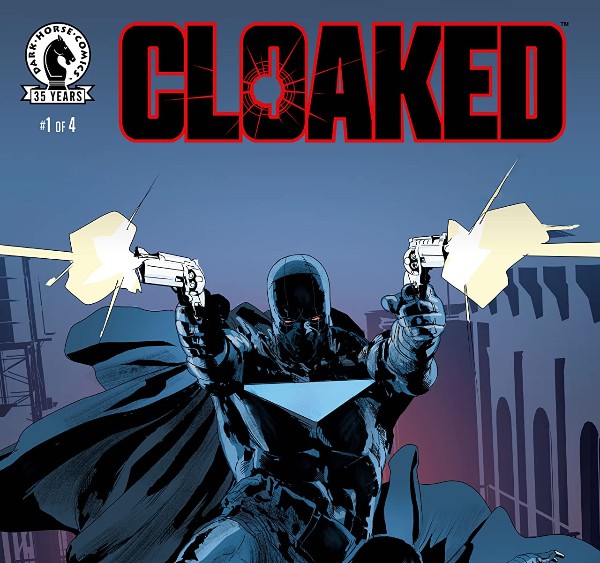 “Cloaked” #1 is a surprising story. We went into this one completely cold, with nothing but a look at the cover. Sometimes it’s good to pick something up off the shelf based on pure aesthetic alone, and see what happens. So here’s what my thought process looked like: On the cover we see a Cool Dude in all back with Cool Guns looking like a matte Pinhead with the spines removed who is maybe also a lovechild of Spawn. Anyways, the dude looks slick as hell, and the visual aura of the story read as gritty, action-packed, and a little seductive. “Cloaked” #1 is all of those things in some form, but it’s also, frankly, surprising. 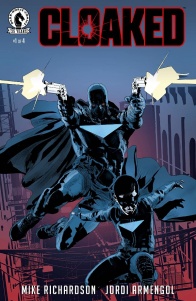 Mike Richardson! Twenty-five years ago, a genuine masked hero came out of nowhere to declare war on crime. All of America celebrated the exploits of the black-clad vigilante as he took down one lawbreaker after another . . . and then he disappeared. But when down-on-his-luck investigator Jake Stevens is hired to find the long-missing dark avenger, his inquiries threaten to expose the myth behind the mask. Written by Mike Richardson–creator of The Mask, producer of the Hellboy film franchise, and writer of the 47 Ronin graphic novel‚ and illustrated with gritty realism by Jordi Armengol.

Part of the surprise comes from the absolutely derivative plot hook Richardson uses in “Cloaked” #1, which, somehow, still works really really well. Let’s set the scene. Jake Stevens is a pretty crappy dude, and an ex-cop who got left in the cold by the NYPD for using unconventional, illegal investigation methods. He was an effective investigator, but too much of a liability. As a result he started his own private investigator agency chasing cheaters and delinquents, of which he is at least one if not both. He has a girlfriend yen years younger than he is, a bitter ex, prior work relationships all based on quid pro quo, and not much to his name except infamy waning into irrelevance. As a protagonist, Jake is pretty scummy but also has no illusions about how his life has turned out. He’s not bitter, just sardonic and at peace with his small beans investigative life. Everything changes when a reclusive billionaire hires Jake exactly for this reason: because he’s unconventional, skilled, and under the radar. Enticed by the payout, Jake takes on the mission: figure out what happened to a cloaked vigilante that brought ruin to the criminals of New York City 25 years ago.

At first, we were skeptical. The opening scenes of “Cloaked” #1 read like a bootleg Batman. New York City does its best Gotham impression, the cloak guardian certainly has batman vibes (takes no bullshit, is pretty grim, stoic, etc), and on top of that we have a reclusive billionaire. What would have been an eyeroll, however, wasn’t. In part that’s because Richardson is such a strong writer. Jake’s personality is crystal clear, and he has the perfect balance of likable, chaotic, and asshole. The dialogue in the “Cloaked” #1 rolls off the tongue, and feels smart and hardboiled. While the cover may have made this story look like superhero chaff, it’s actually a compelling detective story first and foremost. The dialogue/interview scenes may be a bit much for some readers who are less into text-heavy stories, but if you’re willing to lean into the dark world of “Cloaked” #1, you’ll be rewarded. From a plot perspective, “Cloaked” #1 delivers despite the derivative opening. The hooks are there, the intrigue is there, and the character personalities are in full swing. We’re excited to see where the story goes, and how this series develops. Note that “Cloaked” #1 is billed as the first of four issues.

Jordi Armengol brings the heat in terms of art and illustration. “Cloaked” #1 has a no-nonsense, straight to the point realist style that really works for a detective story like this. Characters are well defined and clearly delineated. Jake is rocking that Disco Elysium-esque drip, and leans into the disheveled detective look that comes off as natural as opposed to goofy. Colors are clean as well, and “Cloaked” #1 uses mostly greys, blues, and blacks that feel drab in “winter in New York City” kind of way that feels comforting to those who know that feeling. Speaking of, New York City looks good itself, and the city is believably rendered. Sometimes stories lean too hard into their settings, and so far we see none of that in “Cloaked” #1. While making the setting a character is always fun, in a story like this, it feels better to let the mythology and grandness of New York City stand on its own. On top of that, there’s a lot of good shadow work in “Cloaked” #1 that fits well with the hardboiled detective vibe it’s going for.

While we mentioned it earlier, the superhero in “Cloaked” #1, who doesn’t even have a name in the story, by the way, the costume is worth mentioning again. Armengol does good work here, brewing up a hero whose weapons of choice are two meaty revolvers, and who drives what looks like an early model Ford Batmobile-style car. It’s this cool, minimalist take on steampunk and sleekness. As is an ongoing theme in “Cloaked” #1, what could have come off as goofy instead looks cool as hell.

Piekos on letters does his due diligence. While there’s not much space to be creative in terms of letting, “Cloaked” #1 is a dialogue heavy story so it helps that things look clean and efficient.

Overall, “Cloaked” #1 beat our expectations. From the first few pages, it felt like the same old same old, but “Cloaked” #1 quickly morphed into something mysterious and memorable.

Final Verdict: 8.5. Mysterious and memorable, this is a well executed, sleek detective story wrapped up in a superhero costume that’s just getting started.