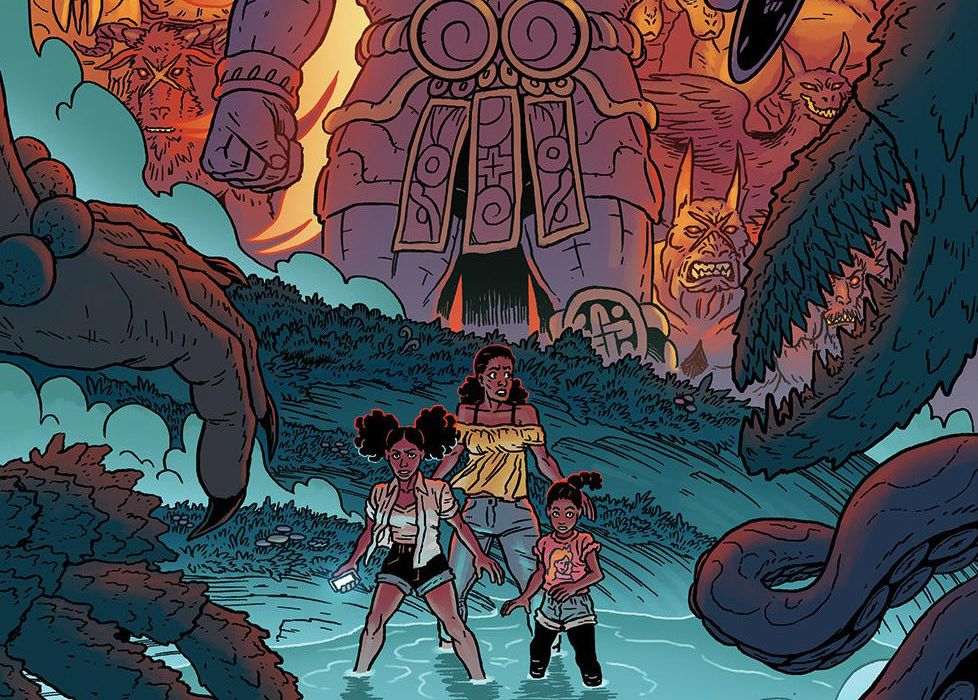 “Cloudia and Rex” continues this week as moody teenage girls and their mom help Aztec-style Gods fight off the apocalypse. Need I say more? 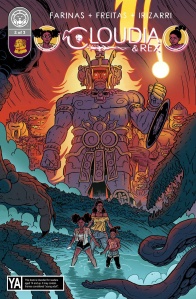 Young Cloudia, now full of fugitive gods fleeing the High Waveform dominating their homeplane, searches for her mother and sister, Rex, while learning the extent of her new abilities. Hot on her trail is Tohil, the warrior god intent on stopping her before she finds the heart of the World Tree.

I find it refreshing to see how realistically Farinas and Freitas depict these characters reacting to supernatural occurrences in this comic. Not to say this happens in a gritty, “Watchmen”-esque way, but more of a normal person trying to cope with something outside of the norm. This is focused best through the girls’ mother, someone who has moved from her motherly position of power to a bystander due to reasons beyond her comprehension. Even when she’s tricked by the warrior god Tohin in a pretty generic fashion, it’s understandable that she’d just take it in tow with all the other bat-shit crazy happenings around her. I find she’s the most compelling character in the series because of this, and I applaud Farinas and Freitas’ effort into making this so.

As I previously mentioned, some of the plot devices here are, on the surface, a little cliché. But Farinas and Freitas filter them through some great character work that they actually feel fresh and believable. In the climax of the issue, Tohil bargains with Cloudia to exchange the gods she houses in her body for her family’s life. In the hands of lesser creators, Cloudia might have tried to act heroic and selflessly put her and her family’s life on the line for the gods. However, Cloudia speaks exactly what the readers are thinking, saying ‘I’M SORRY, BUT I LEGIT JUST MET YOU GUYS, GOD OR NOT. THAT’S MY FAMILY’. As a reader, I found this very satisfying, even if it may not have been smart or morally the right thing to do.

The only real problem I have is that there’s not enough about that gods that I care about. I get that they’re the inciting incident for the series, and that they give Cloudia and Rex an escape from their normal lives, but I feel like they simply serve as wish fulfillment machines. There’s not enough time spent developing how they’re important to the core character cast, and they even separate the family, causing them to be misdirected by Tohil. It works as a separate plot line, and I actually love how the gods aren’t clean cut themselves, looking to merely remain relevant and alive. It just feels secondary to the core drama of Cloudia and Rex’s family, and not enough is emphasised on the gods’ motives and mythology. Again, I will say that what we have of the mythology is a lot of fun – warrior gods filled with hubris but chock full of deadly powers is right up my alley, and Farinas and Freitas really scratch that itch.

Of course, what most readers will be attracted to in this issue is the lush, lovely art of Daniel Irizarri. The slick pseudo Aztec character designs follow on from the first issue, with the warrior god Tohil popping off the first page with considerably hefty, attention-grabbing headgear. However, it’s even more fun watching the moody Cloudia abuse the gods’ powers to transform into Super Sentai/Aztec hybrid costumes. Irizarri really gets to flex his artistic chops as Cloudia turns into a floating-glowing-fish-commanding lion rider, and a four-armed, petal-forming mystical goddess. He’s got a great eye for costume design that adds a modern flair to an ancient, historical aesthetic, without ever looking cumbersome or impractical. This practicality element is especially evident in the 40’s “Wonder Woman” type outfit she adorns for battle with Tohil’s lackeys – a top and skirt combo that looks stylish while allowing for dynamic movement.

Therein lies one of Irizarri’s other great talents – his flair for silky smooth action. In every scene, Irizarri practices a great understanding of the sequential element of comic art. One page that struck me as particularly well-composed is when Rex and her mom bound around on mushrooms with Rex transformed into a gorilla. Irizarri cleverly uses the action of Rex’s jumping from mushroom to mushroom to guide and direct the readers eye from panel to panel, speech bubble to speech bubble. Never did I feel like I was confused as to where I should be looking or reading, making for a terrific reading experience that makes it easy for the audience to follow. Similarly, action scenes are dynamic and exciting. When Cloudia fights a laser-eyed crab (do you even need to continue reading this review after that sentence?), Irizarri has his figures move unencumbered by dialogue of any form, using negative space to imply fast movement and really take the readers for a ride. It’s a great way to exemplify the action sequences and a terrific use of motion in a still-moving medium.

I’d be remiss if I didn’t talk about how dreamy and fleshed out Irizarri’s world is. The world of the gods is surreally beautiful as soon as you open the first page – the terrain Rex and her mom traverse consists of multiple floating, forest-drenched landscapes that twist and turn through the panel. It gives us a really ethereal and otherworldly feel that immediately tells us we ain’t in Kansas anymore. Waterfalls fall through the air and great caverns filled with fungi create such a rich atmosphere that I can’t help but be immersed as I flick from page to page. It works just as well in the quieter, less-busy scenes too – when Cloudia climbs through the underground to find the Omphalos, the environment is a dense collection of tree-trunks and hanging vines, creating a claustrophobic and drastically different environment to convey a sense of mystery.

Impressively, Irizarri handles coloring duty here, and he know how to make a book stand out. Every page is luminescent with incredibly vibrant palettes that are charming but never blindingly bright. The upper forest world has a hazy, orange to purple gradient that creates the dreamy, ethereal mood of the book – every scene in this setting seems to be perpetually taking place at the small space between sunset and dusk, and really emphasises the beauty within Irizarri’s environments. A lot of neon lighting is used here too – the gods fight with bright, energetic lights quite often, and it’s certainly a sight to see. It’s used best when contrasted against a dark background, and Irizarri generally makes sure of this. However there are sections that use it to a dizzying extent – the last two pages have panels literally framed by these laser-like neon colors, and it can be a little too intense to take in.

Farinas, Freitas and Irizarri deliver a great middle act to their high-concept “Cloudia and Rex” miniseries. There’s some great characterisation and although on the surface the plot feels a little generic – it’s executed in wholly original ways. Irizarri works twice as hard to ensure this book is a visual treat, and the results definitely show with sleek modern Aztec aesthetic. This is the kind of book I’d love to dive into with kids, and the creative team have me excited to see how it ends.