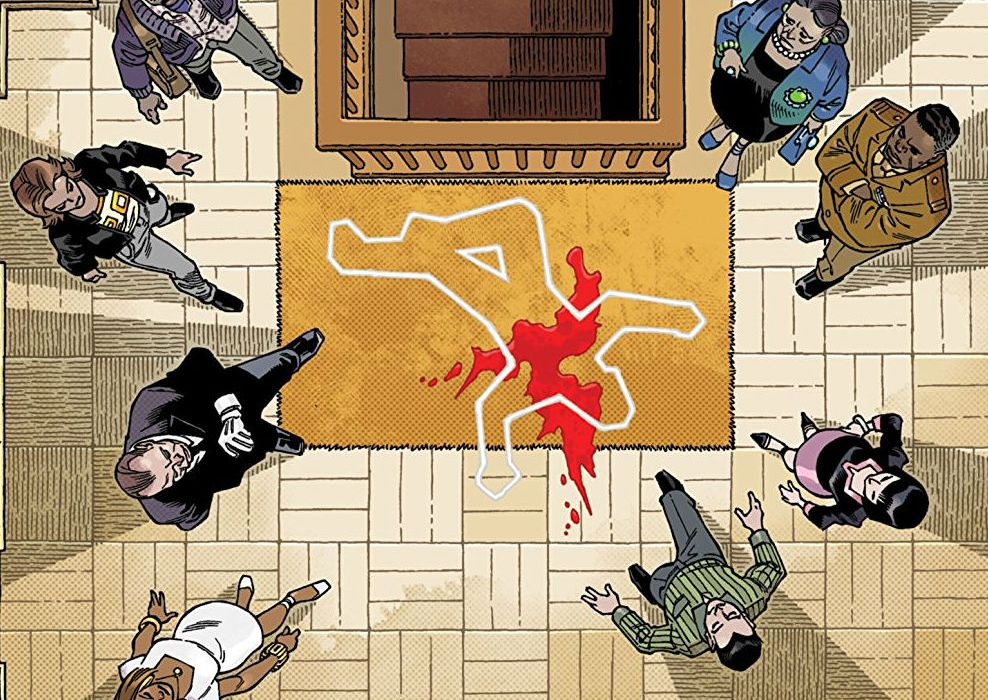 The board game that inspired the cult classic comedy film is now coming to the comic page. The case of who killed Mr. Boddy, where and with what? How does it fare? Let’s look. 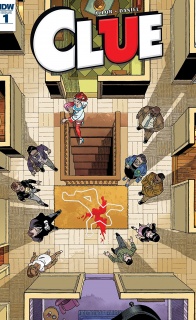 When the mysterious Mr. Boddy turns up dead at his own dinner party, everyone’s a suspect! Miss Scarlett, Colonel Mustard, Mrs. Peacock, Professor Plum—all the familiar faces from the famous board game are back, with a couple new twists. But will Boddy’s Body be the last to fall, or is it just the beginning? Follow the clues and solve the mystery in IDW’s new CLUE series!

“Clue” a.k.a. “Cluedo” a.k.a. That Board Game You Gram Had is one of most well-known board games in history. It’s simple mechanics and premise of figuring out who killed a millionaire, where in his mansion, and with what weapon inspired the 1985 murder comedy of the same name that is one of my favorite comedies of all time. Now it has its own comic adaptation. Can it bring a new spin to this long-running franchise?

Well, if we’re going by this first issue, yeah!

Let’s get it out of the way first: this is very much an introduction, bringing in all the player characters and the premise. So you’ve got Miss Scarlet, Mr. Green, Professor Plum, Mrs. Peacock, Colonel Mustard and (in an update) Senator White and Dr. Orchid. It also gives us a brief introduction to the quickly murdered man, A. Boddy. The characters all arrive at the mansion, located on an island, for a dinner party. The murder occurs and the cops -Detectives Ochre and Amarillo- arrive to begin the investigation, only for another twist to carry us to the next issue.

But it’s all about the presentation that Allor and Daniel create. The story is told to us by Upton, the Butler (What does he do? He butles.) and the Omniscient Narrator, as he gets reassurance from “Clue”’s editor, Carlos Guzman. No really, Upton has to peer off the scene in the mansion to a scene in IDW’s offices to remind Guzman. It’s the kind of Fourth Wall breaking out of something like Animaniacs and it works so well. But Upton’s awareness is all throughout the book, like at the beginning where he asks the reader to forgive the guests seemingly being stupid, they don’t realize they are in a comic.

Then we get to the characters themselves. Allor and Daniel really do channel the spirit of the film with their updates. Apart from giving a good update when it comes to the casts ethnicity, it provided a great deal of eccentric and a bit chaotic personalities. Aside from the aforementioned Senator White (who made her fortune with a maid service company, in a nice nod), Miss Scarlet is an Australian pop singer and Mr. Green couldn’t more be a stand in for right bastard Martin Shkreli if you tried. That kind of pretentious Red Pill, MRA fuckwit that you’d consider a civic duty to punch in the mouth. Perhaps the closest to regular interpretation is Mrs. Peacock, the wife of a dead Senator. It continues with the Detectives. Ochre (who grew his Cop Mustaches out of peer pressure, as the lemony narration box tells us) in particular being a bit obvious. These personalities make for some interesting and hilarious combinations.

Nelson Daniel’s art in “Clue” is a load of fun. It mentioned Animaniacs before and while it doesn’t go into into the wacky levels that show went, this art feels like that combined with artists like Riley Rossmo. Visual personality seeps from these characters, from Colonel Mustard’s calm, controlled expressions, to Mr. Green’s faux-affable but shitty smirks, to Scarlet’s choice of clothing. His page layouts are also very well designed. The aforementioned Fourth Wall break with Upton talking to the editor could have come off as trite if it not been for the layout of Upton peaking down “over” the gutter below him.

The colorwork Daniel brings to the table is also very solid. Vibrant without overdoing it and subtle when it needs to emphasize the more crime noir elements to the story. the interrogation of Mrs. Peacock is a standout example here. I appreciate how Daniel sets up the lighting in the darkened room. It never has a “focus”, if that makes sense. There is no solid visual representation of the lamps and the lighting makes the room feel more drab. More ominous. The use of black negative space to cast an inhuman look on the Detectives on the end of that scene only further emphasizes the coming twist.

Now there is something that may polarize some people, the post-issue material. When the Clue movie came out in theaters, there was actually three different endings. Different theaters got different endings. It wasn’t until it came to video that you got all three endings at once (“That’s How it Could’ve Happened” “But How About This?” “But Here’s How it Really Happened”). “Clue” here does a similar thing by offering an additional scene with a clue. The kicker is that there is three different scenes, with each issue having a different one. This may cause some people to be annoyed that they’d have to buy three different copies, and that is something that should be mentioned. But it doesn’t bother me as bad (well, I got a review copy so I had all three scenes. Fringe benefits of being a comic journalist alongside the existential dread) because it adds to the fun for me. “Narrative Asymmetry”, as Upton calls it.

“Clue” could’ve been a mediocre adaptation of a franchise that hasn’t seen light in a while. But by taking inspiration from the movie and injecting a load of charm and wit, Allor and Daniel crafted an incredibly fun start to a murder mystery that I am grateful to have caught. Whether you read in singles or wait for it all collected, get on board this.