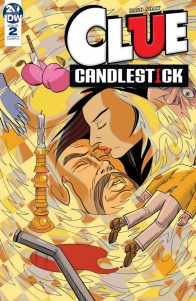 Was it Miss Scarlet in the conservatory with the lead pipe?! In issue two of this mind-boggler based on the timeless detective game, suspicions mount and Scarlet’s story is revealed. Still, more bodies will fall. Cartoonist auteur Dash Shaw deepens the mysterious, quirky, and colorful world of Clue!

Why do people love murder mysteries? I mean, I know why I love them but of all the genres, this is the one that has always seemed the most out of place, intertwined with the crime genre but set apart from it by a few notable conventions.

For sci-fi and fantasy, their purpose is about imagining a world that is not like our own while historical fiction and westerns take us back to an often romanticized version of the past. Romance (erotica included) and horror create safe places for us to explore difficult, personal emotions and fears while the crime genre produces a world in which human actions have consequences we can see and watch be punished. . .or escape, as the zeitgeist dictates.

But murder mysteries? Where do they sit? They are extremely voyeuristic, often reveling in the grisly details or sordid affairs and secrets that surround the victims until, ultimately, the trappings of the crime genre step in, ushering in a solution and justice, in one form or another, wrapping the deaths up in a nice bow. Why bring this up here? Well, because “Clue: Candlestick” is a comic that understands exactly what it is people love about murder mysteries, board games, and the reasons “Clue” has remained so ingrained in the popular consciousness, even with the asinine updates to the game formula (going to the pool to make an accusation!? I think not!)

“Clue: Candlestick” #2 is the second in a three issue series, which means that the solution to the mystery is tantalizingly close and never far away, which keeps the intrigue high and the reveals constant. Secrets are hidden around every corner, in the background, in the foreground, right in our faces but we don’t notice because Shaw has successfully misdirected our attention with a well placed arrow or sign. Or with a puzzle meant to slow us down and remember that we, the audience, are not a passive receiver of the story but instead an active part in making it complete. He reminds us through puzzles and comments and the occasional spotlight of a previously obfuscated detail that we must work for the pieces to the answers we seek.

One such puzzle, midway through this issue, does this masterfully, and yet, in the simplest manner possible. It’s these moments that make the comic worth reading and rereading, pouring over every mannerism, color choice, environment, in order to try to glean more information in light of newly revealed details. And while I could continue praising these aspects, there are parts of the comic that won’t connect with everyone.

To start, all the dialog is very processed. While I personally find the somewhat stilted, overly dramatic dialog to match the visuals and tone of the piece, playing into the off-kilter vision of the comic, it will certainly bother some readers, in particular, the opening few pages with Miss Scarlett. The same is true of Shaw’s artwork. Everything and everyone is impressionistic, with hands that never look quite right, and limbs and torsos that stretch and puff, and bodies highly defined with inking lines right next to ones completely outlined with solid shapes and colors.

However, the clarity with which his art and his dialog convey the eccentricities of each character, which are often the most important parts of an ensemble in a murder mystery, and the flavor of the original board game’s art is what makes it all work. Shaw has brought the board game to life on the page, raising the characters not as is but instead as they could be, straight off the box and into a story that fits the strangeness of them all without leaning too hard into the overdone characterizations and tropes.

It’s particularly interesting to look at how Shaw uses his word balloons and captions. You’d think in a mystery so focused on the visual details that they would be small but oftentimes they dominate their panels with fat tails and plenty of room to surround the words. And yet, this establishes a rhythm within and without the panels and, once again, contributes to the unique look and feel of “Clue: Candlestick.”

What, then, about the actual plot contents of issue #2? Is the structure of the issue any good? It’s odd because, at first blush, it seems that issue two seems to spend an awful lot of time on Miss Scarlet’s backstory, nearly half its page count. As a reminder, this is a three issue series! Why? Well, I think part of that reason is because it would do no good to remain in the present for the whole of the issue. There isn’t much more that could be explored without having to build in a large amount of red herrings to keep the intrigue up and the previous issue’s way of chunking up time near the end left room to fill in the gaps, which then gives us all the information we need to solve the mystery.

Additionally, Scarlet’s backstory is thematically relevant, showing her connection to Boddy and his strange collection of deadly objects as well as what the motive behind the current murders may be, and paying off the cliffhanger at the end of issue #1. It also gives us a greater connection to at least one of the remaining characters, which in a murder mystery is vitally important.

Which brings me back to my initial question: Why do people love the murder mystery and by extension, “Clue?” It is because there is always something to be learned about the human psyche through the reasons one may decide to take the life of another. It is because the closure we feel when there is a reason behind a death and WE can solve it is tantalizing and comforting. And it is because everyone loves a good puzzle.

Final Score: 8.6 – While certainly not everyone’s cup of tea, “Clue: Candlestick” is a mesmerizing take on the board game that captures its essence and crafts a mystery that you can’t help but try to solve.