Ed Brisson brings us a high concept sci-fi that wears its influences on its sleeve. But can “Cluster” step out of the shadows of its contemporaries enough to justify its existence? 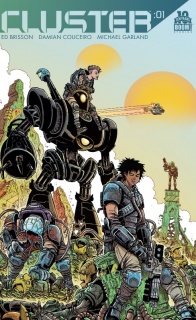 When a group of prisoners serving their time as soldiers become stranded and abandoned on a war-torn planet, they’ll need to work together to survive and uncover the truth behind Earth’s role in deep space.

Brisson and Couceiro’s new original sci-fi romp sets out its stall nice and early. Before you’ve made it past the credits page there’s a poster that says ‘Life Sentence? Fight for your planet instead and you’re out in 15 years!,’ and that’s pretty much the premise of Boom’s latest addition to their stable. Set an indistinguishable amount of time in the future, human’s have both mastered space travel and come across planets inhabited by sentient alien life of all shapes and sizes. Of course, being human, they immediately get to colonising, but this rapid expansion means resources are stretched thin and more soldiers than ever will be required to hold the line on the final frontier.

That’s where out protagonist, Samara Simmons, comes in. Convicted of a vague criminal offence that presumably carries a life sentence (although this is never explicitly stated) she elects to take her chances serving fifteen years as a soldier on the outer lying planet of Midlothian instead.

Midlothian is equal parts prison cell and army barracks, and the establishing panels that give us our first glimpse of the inside of the facility play out like a mixture between Jake Sulley’s introduction to the human settlement on Pandora in Avatar and Piper Chapman’s induction to the womans’ prison in Orange is the New Black.

All the visuals you’d expect from a standard prison are on show here: unwelcoming inmates, invasive and dehumanising physical checks, and an overcrowded facility that seems more like a concrete jungle than a rehabilitation centre. These initial establishing pages are accompanied by the booming exposition of an army general/prison warden whose gruff, no nonsense attitude could’ve been pulled straight from ‘Full Metal Jacket’.

Cut ahead to the next morning and to a mission briefing for these conscript convicts on the latest threat to human expansion, the monstrous Pagurani. The overt Americanism and us and them style deconstruction of the situation is so hyperbolic that it feels as though it could’ve been directed by Paul Verhoeven, and it’s only after this point, over half way through the first issue, that our protagonist gets to say more than a few stoic phrases.

Brisson transitions from one setting to another pretty quickly during the first half of this comic, perhaps feeling the pressure of a, clearly very complex, world that he needs to build for his audience. But the imbalance between showing and telling in this opening issue definitely makes me feel as though he doesn’t trust his story to do the job it’s intended to. A lot of the conversation feels closer to monologuing, especially when it’s the staff of the prison barking orders at the recruits, and there’s a lack of personalisation to many of the characters that makes them feel like they’re quite one dimensional. We tick off all the prison cliches in this first issue (the roughest and toughest of the new inmates eyeballs our protagonist’s new friend and starts a fight, our protagonist breaks up said fight and gets unfairly thrown in solitary, the colonel/warden calls her out for her cocky, selfish attitude, etc.) but it’s not until the final few pages that Samara displays any skillset that differentiates her from the myriad of stoic loner characters that have come before her.

Once we get there, however, Brisson seems to finally find his footing as far as pacing goes. the last few pages are well balanced with action and initial character development that promises an interesting ensemble cast. Free of the restrictions of having to explain every element of his premise to the reader, he seems able to just relax and tell a good story.

Couceiro’s art is well matched to Brisson’s writing and he does a great job of creating a unified aesthetic from the get go. The uniforms, facility, and weaponry feel well both well-worn and futuristic, and he’s quickly captured the feeling of a world that is both the unknown out-reaches of space and the familiar territory of the wild west. Couceiro’s best contribution to this issue has to be, however, his close-ups on faces and expressions. He manages to convey the standard character types that Brisson has served up to him with a fresh and relatable twist that makes them instantly recognisable, and his light touch with expressions means that Brisson is free to have a character saying one thing, but meaning another altogether without worrying that the nuance will be lost on the audience.

Ultimately, while I did find ‘Cluster’ enjoyable enough, I felt that there just wasn’t enough that was tangibly different in the storyline to tempt me back. If I pick up the second issue it’ll be largely for Courceiro’s execution of the alien landscape and not for the characters. This first issue felt as though it was trying to cram whole worlds into twenty-something pages, when really it should have been focusing on the one woman that the reader is supposed to care about.