I’m not going to give “Coffin Bound” #1, the trippy new book from Image by Dan Watters and Dani, a perfect score. I mean, it’s the first issue, and as flawless as this premiere issue is, we need to let the series crescendo, right? It needs to gather a little momentum after dropping readers into its post-apocalyptic, vaguely Southwestern (or is it Australian?) landscape. Spoiler alert: I’m totally going to give it a perfect score. 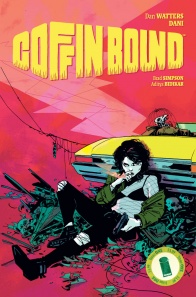 Cars! Guns! Entropy! Chased by an unstoppable killer, Izzy Tyburn has decided that if the world won’t have her in it, it can have nothing of her at all. She’s re-treading her life, leaving nothing but burned rubber, ash, and the sun-scorched bones of those who get in her way.

This first issue unfurls like a Lynchian dream, a descriptor that is overused, but when the opening pages feature the book’s protagonist Izzy Tyburn being rousted from sleep by an anthropomorphic half man/half vulture with a birdcage surrounding his head, the adjective is apt. What follows is the opening stanza of the story of a wanted woman with some deadly psychokinetic powers being hunted by the EarthEater, a humanoid who, well, eats earth and has some contract on our fishnet top-wearing, chain-smoking hero.

Watters nails the bizarre premise without once leaving readers wondering what’s going on. We are only left with the why, but the somewhat alien setting, that is far from alienating, envelopes readers in its Mad Maxian environments and manages to make us not care about any elaborate backstories (similar to George Miller’s creation, Mad Max’s backstory is simply unnecessary). Watters’s dialogue crackles with a combination of Deadwood-like Shakespearean formality and frontier roughness, and Izzy’s gothic personality, that alternates between dry cool wit and sweetness by the issue’s close, makes for an intriguing protagonist. It’s easy to how she would accept the companionship of the vulture man without even blinking.

As in many stories like this one there’s a small but eclectic cast of supporting characters with, as Izzy calls them, tangential relationships to her. There’s Paulie, the poetic night club owner that caters to a very particular fetishes and has set the wheels of the story in motion. There’s Izzy’s “manager” Ben, a germaphobe and likely an agoraphobe who communicates with Izzy via a rotary phone from a spartanly-lit bunker. Finally, there’s a blind native American-looking character who, well, let’s withhold some details, shall we? Watters handles all of their introductions with aplomb, and weaving through it all are the churning tires of Izzy’s muscle car.

The breathtakingly assured artwork by Dani is the star of the show in this premiere issue. Readers will linger over every detail of the book’s cluttered and chaotic beauty. Her varied panel layouts frequently feature dramatic dutch angles and other kinetic perspective shifts. Every page is visually sumptuous, wringing every bit of drama out of Watters’s scripting. A delightfully demented devil is in the details of “Coffin Bound”‘s visual stylings. The ingwaz rune patterns that accompany the smoke from Izzy’s cigarettes and the exhaust from her car coupled with her display of powers hint at Izzy’s witch heritage, and reminds this reviewer of Fairuza Balk’s goth punk character in 90’s cult film The Craft. Dani’s style recalls Frank Miller’s work on Sin City and Eduardo Risso’s 100 Bullets in its mastery of form and shadow, and Izzy’s tousled raven coif curls around her large eyes and minimalistically rendered but expressive face. Dani possesses an animator’s sense of body language. Her panels bristle with life in the barren wasteland setting. Brad Simpson and Aditya Bidikar deserve equal praise for respectively handling the coloring and lettering chores. Simpson is unafraid to shift and take chances with his color schemes throughout the book to achieve a kind of rural noir, and Bidikar’s unobtrusive but still playfully dramatic lettering work keeps the story zipping along.

About a quarter of the way through this first issue, Izzy says, “And so this world is as I always thought it would be. A short-lived one.” Witches are generational beings that traditionally bear witness as they move through large swaths of time and space. “Coffin Bound” is the story of one person’s willful unmaking. She will erase herself from this “short-lived” world on her own terms and not at the whims of a hired, dirt-eating zealot. The hero of this book knows her time has come, and instead of fighting, she will set herself and everything she has touched on fire on her way out. She won’t shuffle off this mortal coil. She’ll hit the gas. As the Kafka quote that accompanies the book’s credits page prepares us: “My last request: Everything I leave behind me… to be burned unread.” It’s a refreshing take on the way most people approach the concept of mortality, namely, with uncertainty and dread. “Coffin Bound” may ultimately be about being unshackled from the weight of one’s individual legacy, but if this first issue is any indication, this series won’t soon be forgotten.

Final Verdict: 10.0 – “Coffin Bound” #1 is engrossing series launch with art and script that beautifully complement each other, raising the whole enterprise to the level of comic book perfection.