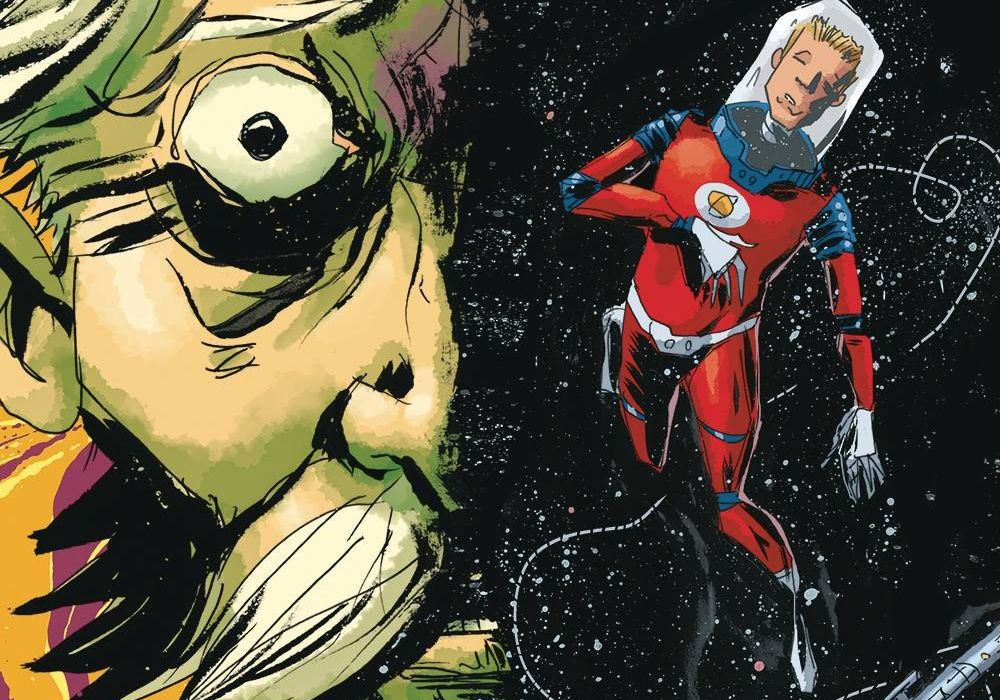 Spinning out of the World of Black Hammer and life as he has become accustomed to it, Colonel Weird finds himself separated from the other superheroes; zapping through time and space on a journey from which even he may not be able to return. Mild Spoilers Ahead 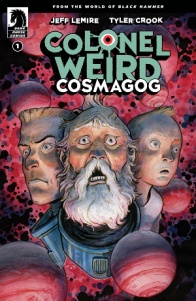 Throughout the on-going main series of “Black Hammer” we have gotten glimpses of who exactly Randall Weird is. We were just beginning to understand his motivations and what makes him tick at the end of the last arc. One of the most fascinating and possibly misunderstood characters in all of the ‘World of Black Hammer,’ readers may finally get a much tighter grip on who this man is within the pages of his own miniseries.

“Colonel Weird: Cosmagog” #1 picks up right after the events of “Black Hammer: Age of Doom” with the entire team (family) leaving the farm for good with reality crumbling around them. Weird leaves the farm as well, but finds himself completely isolated in an unfamiliar place, but he soon realizes that he has been here before.

Standing on a highway in a desolate desert region of the United States, Weird quickly realizes he is alone. Assuming his friends were able to go home, to return to a possibly normal life, and he is stuck somewhere without knowledge of place or time; Weird makes his way into a gas station. As he walks through the door, in search of an ice cold soda, he transforms into his childhood self. Briefly engaging with the store clerk and heading to the fridge, he sees a terrifying image of the Anti-God – who looks to be dead/dying. A gloriously haunting vision of cosmic horror. It is at this point that Colonel Weird begins to move once again through time and space to various points in his life, namely his past.

The story then bounces Weird and us through major events in his life, like the team’s battle with Anti-God, the launch that sent him on his deep space mission, and apparently becoming a sort of cult leader. With each turn of the page thoughts and events overlap and bleed together. Coming to a realization that he has forgotten something important, and must go on a soul search of sorts to remember what it is, Weird comes face to face with versions of himself from throughout his lifetime. They seem to be working as guides to help him remember. Without this piece of knowledge they will all come to an end of some sort. By the end of this issue it almost gives us a sense that we will going through a cosmic riff on “A Christmas Carol” with ‘spirits’ placing Weird at specific points on this unknowable journey.

Handled poorly this could have been a logistical and comprehensive nightmare, but writer Jeff Lemire handles the strange timeline in a way that is both disconcerting but easy enough to follow with the information we have. It probably doesn’t need to be said, but this is not a jumping on point for this universe. Reading – and re-reading “Black Hammer” is a definite prerequisite to get any sort of grasp of where this story begins and where it will lead us.

Lemire is a master at dosing out information in a way that keeps us tied to the story without making us an omniscient observer. We are never meant to be ahead of his characters. We are on this journey too and if we were bogged down in exposition to keep us ahead of the curve the reveals would never be as rewarding as they are. The same goes for “Colonel Weird.” It’s a crucial mystery that must be solved for the sake of this character’s existence and while the plot makes things dire, it never feels hopeless. And you will want to be on this ride, not helping to guide it. No matter the outcome, it is safe to say that it will all be worth it in the end.

Artist Tyler Crook (“Manor Black,” “Witchfinder”) is a new addition to the “Black Hammer” universe, taking over full art duties on this miniseries. Where co-creator Dean Ormston’s artwork is a perfect blending of Golden Age superheroes and Atomic Age science fiction that makes this universe what it is; Crook’s style captures an ageless comic strip style, blending it with the ethereal vibes needed to tell this trip of the mind and soul. Also, his years spent working on “Harrow County” made him the perfect choice for depicting the floating dust bowl setting of this premiere. He has a way of making everything look both completely solid and look like it’s made out of pudding all at once. And his use of water color palettes is unmatched. He makes every page feel like its own universe just with his use of color.

“Colonel Weird: Cosmagog” #1 is an incredible start to this miniseries, and an absolute must read for fans of “Black Hammer.” It is clear that this will have everlasting effects on the stories to come. This was a comfort read for me, like slipping into a warm bath. A very welcome return to this universe.

Final Verdict: 9.0, Gorgeous from start to finish, this return to the inner circle of “Black Hammer” is a beautiful and touching mind puzzle. 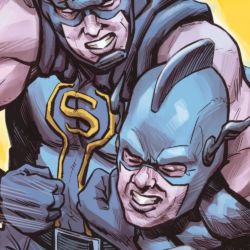 As Spiral City looks to its next era of superheroes, some of the old guard have to come to terms with being replaced in Black Hammer Visions #3. Mild Spoilers AheadWritten by Chip ZdarskyIllustrated by Johnnie ChristmasColored by Dave StewartLettered by Nate Piekos of BLAMBOTAbe Slamkowski, best known to Spiral City – and the world […] 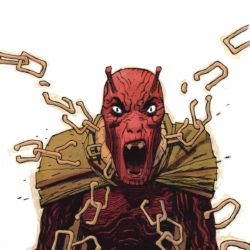 “Barbalien: Red Planet” comes to its end with its fifth issue, brining the story back full circle to where it began, with a stark portrayal of the red planet.Since this is the final issue, there will be many spoilers ahead.Story by Jeff Lemire and Tate BrombalScript by Tate BrombalIllustrated by Gabriel Hernández WaltaColored by Jordie […] 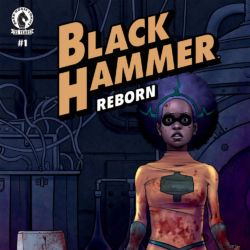