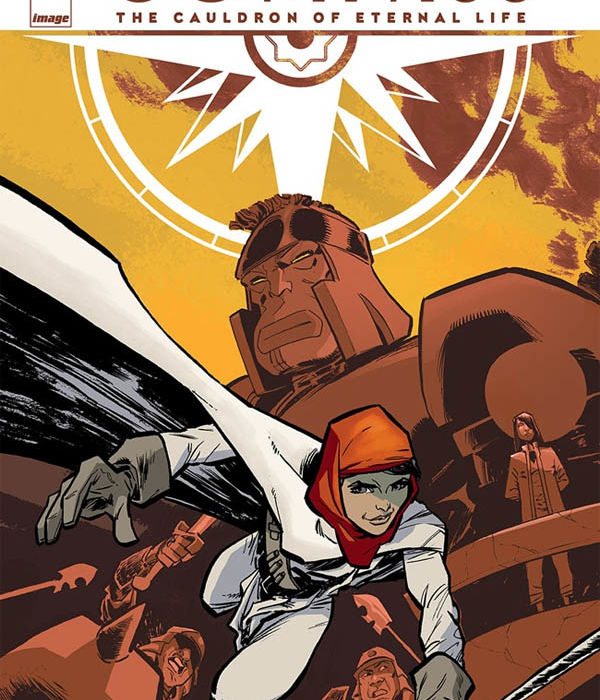 When Image first reviewed the “Compass” #1 press release back in March 2021, writer Robert Mackenzie’s description of the story stood out: “‘Compass’ was born out of our desire to tell a story of discovery without colonialism, of adventure without exploitation — something with the verve and energy of the pulps, but with a perspective that hadn’t been seen much in that genre. “Compass” #1 certainly succeeds in those regards, and the story will appeal to any action/adventure fan or history nerd. While the plot of “Compass” #1 feels pretty simple, the characters and art really help it shine. 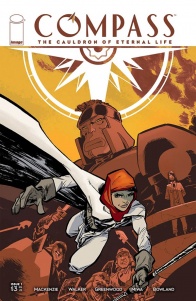 GREG RUCKA proudly presents a new direction in adventure with…COMPASS! Shahidah El-Amin is many things: scholar, cartographer, astronomer, mathematician, scientist, explorer, adventurer, and—when need be—two-fisted fighter. Setting out from Baghdad’s legendary House of Wisdom during the Islamic Golden Age, Shahi’s quest brings her to 13th-century Britain…where the Welsh are whispered to possess the secret of eternal life. But Shahi’s not the only one after it… Re-teaming from the pages of THE OLD GUARD: TALES THROUGH TIME, writers ROBERT MACKENZIE and DAVE WALKER (LAZARUS SOURCEBOOK) and artist JUSTIN GREENWOOD (Stumptown, THE FUSE, THE LAST SIEGE) take you on a breathless race. Follow the Compass to unlock the secrets of the ancient world!

Western audiences’ general understanding of history probably includes a few things in broad strokes: Alexander the Great, The Holy Roman Empire, medieval Europe as a thing, so on and so on. “Compass” #1 offers history from a different perspective, paradoxically constructing a historically realist world that’s infused with fantasy. Even more paradoxically, it works. “Compass” #1 follows the conflict between the Mongolian invasion of the Abbasid Kingdom (modern day Iraq) in 1242 CE as it plays out in the backwater swamps and fiefdoms of Wales. We’ll see what locales the series takes us to in future issues, but for now that’s where “Compass” #1 stands. If you have no idea what that looks like, you’re not alone. We’re happy that “Compass” #1 specifically shows us unfamiliar events, delivering a much needed blow to the wall of eurocentrism that obscures so much history. With that in mind, it’s the responsibility of the writers to give us context clues for what’s going on, if they choose to do so. In the case of “Compass” #1, they do not. Throwing readers into the deep end can be a good way of humbling them, which can serve its own purpose when it comes to chipping away at eurocentrism. However, If there’s one critique of “Compass” #1, it’s that the setting of the story is difficult to understand, not because the history isn’t real or overly embellished, but because the visual and contextual clues meant to tune us in don’t always land.

For example, the opening action takes place between Shahidah, a scholar of the Abbasid Kingdom, and Ling, a contractor for the Mongol armies. We get a title card saying this is all happening inside a decrepit castle in the Kingdom of Powys Fadog, but on a first read you’d assume that’s either a completely made up location, or somewhere where the two above empires share as a border. Wales was not even on our radar (somewhere out there there’s a linguist/historian/Welshman wringing their fist at us). Not knowing where something is happening only matters to the reader when that fact interrupts our understanding of the narrative. In “Compass” #1, Shahidah floats down a river after her encounter with Ling and her minions, coming to on a riverbank with European vibes. As a first time reader of “Compass” #1 with little context of the story, it seemed like Shahidah had floated Prince of Egypt style all the way from Iraq, central Asia, or somewhere similar all the way to Europe. Confusion ensued.

To be honest, the above is a lot to say over a nitpick, but maybe this anecdote just means that readers should have Wikipedia open in another tab when reading this series, or that you should be prepared to just roll with the punches as they come. This is especially true when it comes to dialogue, as people from different regions and cultures in “Compass” #1 speak with what at least seems like historically accurate cadences and slang. At times it’s choppy, but never narrative breaking.

What works really well in “Compass” #1 is the art and characterization. Greenwood draws some impeccable medieval set-pieces. It’s clear that a lot of research went into producing “Compass” #1, everything from welsh riverside huts to rampart fortifications look fully realized. Every panel in “Compass” #1 is impeccably detailed. Character outfits are also well designed, and help readers keep track of whos who — there are a lot of players in the story. The Mongol warriors look badass, replete with gnarly polearms and a mix of padded leather and scale mail that oozes cool. Shahidah’s garb, on the other hand, is all soft, flowing edges that offers a great juxtaposition to the warriors she faces in the action scenes.

The colors in “Compass” #1 really complement the images, and Miwa’s color palette is really the standout star of the story. The first half of “Compass” #1 is full of hazy blue and reds that have this slight patina that makes the whole thing feel more ancient, and more veiled. You couldn’t choose a better color tone for historical fantasy. The attention to detail for color is just as astounding as the attention to detail in the images. For example, when Shahidah washes up on shore after her evening encounter with Ling, we’re served a really well rendered dawn. The pinks, yellows, and blues are all there, and they make the world of “Compass” #1 feel that much more immersive.

Jumping back to the characters, there’s a lot to say about Shahidah as a protagonist. She’s smart and resourceful with a generally swashbuckling attitude we can get behind. We know less about Ling by the time “Compass” #1 ends, but what we see is good. She’s cunning and a little ruthless, but not unredeemable. We’re excited to see more of her history with Shahidah, and how their competitive/co-operative relationship will develop. When it comes to characters though, the Mongol leader Margul Shagdur fully takes the cake. He’s brutal and has a such a captivating entrance. There are a lot of things Mackenzie and Walker know how to write, and chief among them is perhaps villain dialogue. Shagdur’s entrance is when we were fully hooked on the story.

In sum, “Compass” #1 is not without its hiccups, which comes from trying to pioneer creative space that few others have. Even with those brief moments of narrative friction, the energy of the story shines through. “Compass” #1 feels different from most things on the shelf right now, and its odd mix of historical realism and fantasy feels worth the look.