The thing about Jason Aaron’s run on “Conan the Barbarian” is that, despite being an ongoing story, each issue is really a self contained adventure from different periods of the Cimmerian’s life. This approach not only keeps the story fresh, it mirrors the non-sequential approach of Howard’s original Conan stories. Unlike Howard though, Aaron to come up with a fresh Barbarian tale every single month. It is nothing short of a miracle that the book works as well as it does. 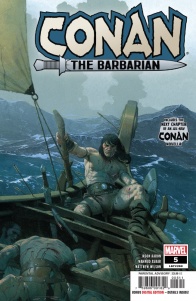 SET SAIL ON A SHIP OF THE DEAD!
•  CONAN leaves the land for the life of a pirate!
•  How did he survive disaster during the most ominous voyage of his life on a ship surrounded by dead men?
•  And the CRIMSON WITCH’s dark plans for KING CONAN become grimly clear!
•  PLUS: The fifth chapter in the ALL-NEW Conan novella “BLACK STARLIGHT,” begun in issue #1 of CONAN THE BARBARIAN!

Notably, “Conan the Barbarian” leans heavily on third person narrative captions. In modern comics, these are practically unheard of, but they were a component of the Roy Thomas “Conan” comics of the 70s. They mirror Howard’s original narrative style. They shouldn’t work because they are slow and overly explain-y. In a visual medium like comics, there’s little reason to explain what you are already seeing. They are superfluous.

So it is a testament to Aaron’s skill as a writer that these narrative captions are great. They are totally engaging, and he structures this story in a way that justifies them. Conan is alone on a cursed ship of the dead. The corpses of the fallen cause anything that eats them to become terrible monsters, be they shark, rat, or barbarian. So Conan needs to let himself starve, and dehydrate, and go mad from the loneliness, or risk becoming a monster himself.

It’s a tried and true story structure. Isolate the protagonist and get them into a desperate survival situation. But it’s one rarely seen in comics. It leads to lots of same-y pages. Conan swinging through the rigging. Conan steering the ship. The sails billowing in the empty and endless sea. Narrative captions animate to Conan’s internal self. And Aaron, who is obviously one of the top writers in comics, proves he has some real chops at just straight-up writing prose. The script is strong, but the sentences in those captions are unusually good.

You’d think the repetitive setting would be a challenge for artist Mahmud Asrar; and you’d be right. But Asrar is devoted to the path of Crom- he longs to prove himself in the face of challenges that would stagger lesser beings. And damn, does he ever. Aaron throws Asrar a bone every so often, sometimes literally, plus there’s a good number of kraken tentacles, mutant monsters, and the occasional flashback to spice things up. But it’s in the quieter pages that Asrar really impresses. Drawing a dude alone with some ropes is hard to make interesting. Drawing the same dude alone with some ropes over more than a dozen panels is daunting. Whatever dude. It’s a cliché, but Asrar approaches every one of these panels like a painting. They all could stand alone.

All that is made possible with contributions from the rest of the art team. Colorist Matt Wilson is known for making striking, bold choices. Here he uses a downright muddy pallet, but the guy is so talented it doesn’t look messy, it looks like a dusty scroll. Letterer Travis Lanham isn’t asked to do any “Sandman”-style nusto fonts, but his letters look to be forged from iron. Perfect for the project.

By the time the story is wrapping up, you’re amazed at how much you enjoy following Conan. He is not a nice or good person. But he’s a survivor, a creature driven by id, and a man who lives by a code. It doesn’t make him admirable, but it makes him interesting to read. Both Aaron and Asrar really sell how impressive the Barbarian is. When the odds are stacked against him, you believe that this is a situation that only Conan could survive. That’s gotta be at the core of a successful Conan story. A situation that calls for a supreme badass, and watching him rise to the occasion.

The ongoing narrative (involving two creepy kids and their witch mistress) asserts itself on but a page. It feels like it’s wrapping up. There may be a twist ending. Perhaps all these stories- Conan battling jungle snakes, Conan escaping execution, King Conan befriending a lion- are lining up dominoes to topple over in an impressive display. But I must confess, I don’t even care. If every Conan issue was from a different period in the Cimmerian’s life, making up a barely coherent anthology, I’d still be all the way on board. How many comic series are made up of stand-alone stories, let alone stories this good? I wish I had a bold, daring take worthy of the Barbarian himself, but I’m forced to repeat what others have said before me: “Conan the Barbarian” is Crom-damned good.

Final Verdict: 9.0 – With creators this good, “Conan” could run for another 100 issues.