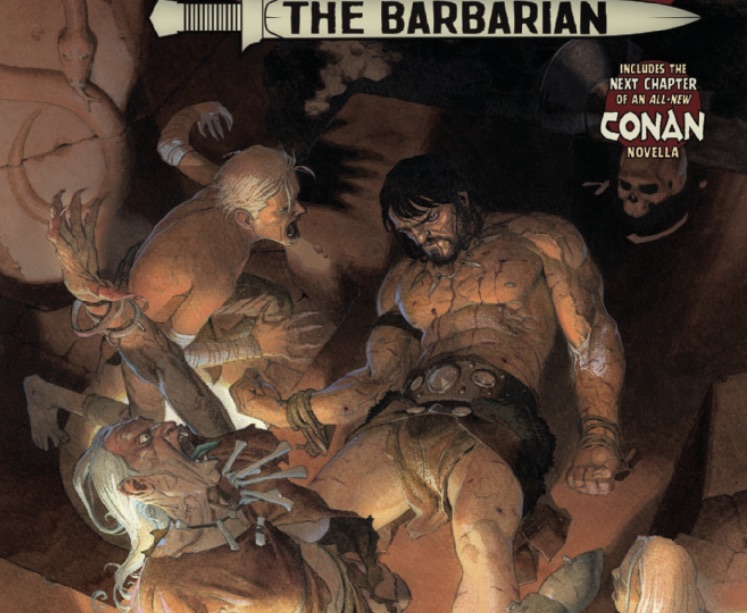 “Conan the Barbarian” #6 situates Conan in the middle of his most perilous battle yet. You know, the one where he knows best and everyone around him is an idiot, only they’re probably going to kill him before they realize? That one. Warning: minor spoilers ahead. 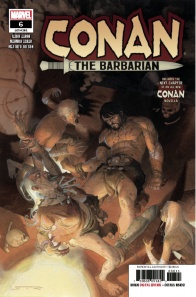 Cover by Esad Ribic
Written by Jason Aaron
Illustrated by Mahmud Asrar
Colored by Matthew Wilson
Lettered by Travis Lanham
CONAN signs on for soldiers’ work – gold, wine and warfare! But the Barbarian’s skills will draw him directly into the CRIMSON WITCH’s scheme, as she drags KING CONAN to the altar of the death god Razazel! Plus: The next chapter in the all-new CONAN novella, “Black Starlight”!

“Conan the Barbarian” #6 plops Conan right in the middle of a border war between the Turanians and the mysterious and terrifying Stygian assassins. As King Yezdigerd yearns to expand his mighty nation, he ends up biting off more than he and his armies can chew. Enter Conan, the sole survivor, and the kind of nature vs. nurture themes that make the original Howard stories so delightful without revisiting any territory that’s too familiar to be entertaining.

Over the course of Aaron and Asrar’s run thus far, we’ve seen many sides of the roving barbarian: king of Aquilonia, sullen youth, ribald corsair and now, mercenary for hire. It’s often during this final role that we’re treated to an in-depth look at the ambitions and failures of civilized men, and Aaron doesn’t disappoint in this issue. Conan’s routinely not only disbelieved, but brought to task and very nearly executed for his ability to survive the Stygians’ covert attacks. The Turanians might be bloodthirsty and ambitious, but Conan’s interactions with their most esteemed leaders, rendered interchangeable through Asrar’s use of armor details and Wilson’s color palette. Only King Yezdigerd stands above the pack, but it takes Conan strangling one of his pampered lieutenants for him to actually listen to the barbarian – and he only does a little. Aaron measures the tension in these escalating encounters very nicely until the final moments of the issue, and ends with the ever-present threat of Razazel and his followers. Throughout it all, Conan remains steadfast and recalcitrant, as usual. He chooses to speak the truth only when spoken to, and only then in the simplest terms possible. He’s a survivor, after all, unlike so many others.

Asrar’s art is lovely, as usual, and it’s nice to see him back on the book for a more populated adventure. Conan’s reveal in issue #6 is delightfully appropriate, and Asrar can do a human battle scene just as nicely as he can depict a sea monster or a forest full of serpents. The Turanians in this issue are almost interchangeable, for good reason, and Asrar purposely limits his costume and facial details to let us know that this book is from Conan’s POV – and just as the faces of naysayers and soft, civilized men would all blur together for the Cimmerian, so too do they become a backdrop for the powerful barbarian on the page. Conan’s face is appropriately shadowed and moody as he addresses these men of power, and Asrar pays special attention to Conan’s body to make good on Howard’s endless references to the barbarian’s muscled thews and powerful physique. Asrar’s Conan is utterly believable, and his art so far on the series is a real delight.

Wilson’s colors are also delightful. He knows how to tint and texture a background and add all sorts of nice little accents to make some of the talkier scenes pop – from the sand-blasted backdrops of Yezdigerd’s palace to the blood-soaked sands of the border wars, Wilson gives each the depth and visual interested needed to keep our attention when a lot of the tension is between Conan and the politics of empires instead of Conan and a disgusting, demonic creature. Wilson’s work is versatile so far, and issue #6 maintains all the sword and sorcery goodness without too much weather or not enough grit. Asrar’s art is precise enough that digital colors could make it look cheap, but Wilson’s got the knack to do “Conan the Barbarian” just right.

Lanham’s lettering is well done, as usual, with the font he’s chosen for all of the titles doing its usual work with enough style to add intrigue while remaining readable. Aaron uses a lot of narration, which fits the book, and Lanham’s choice to use a earthy color for the narrative boxes helps them blend into the backgrounds without blending too much. Wilson’s desert is warmer than Lanham’s burnished color choices, but the two complement each other nicely without any harshness.

The creative team on “Conan the Barbarian” are knocking it out the park with a highly enjoyable run that feels true to Howard’s original vision without relying too much on pulp melodrama. There’s just enough to keep hardcore fans interested, and enough humanity around Conan’s edges to offer a new experience that expands on the original stories. Conan’s life is in immediate danger as we walk through his life and his adventures, and in order for a new generation of readers to sympathize, it’s necessary to go a little deeper. Aaron, Asrar, Wilson and Lanham do just that, and do it to great effect. “Conan the Barbarian” should be on everyone’s pull lists, especially as we’re headed (quite literally) into the underworld in the next few issues. Conan’s a firm believer in the power of his sword, above all else, but the weary king might just have met his match. All hail the Hyperborean age!

Final Verdict: 8.0 – “Conan the Barbarian” #6 delights with a look at the barbarian as he stands opposed to civilization, and a mean cliffhanger to boot.