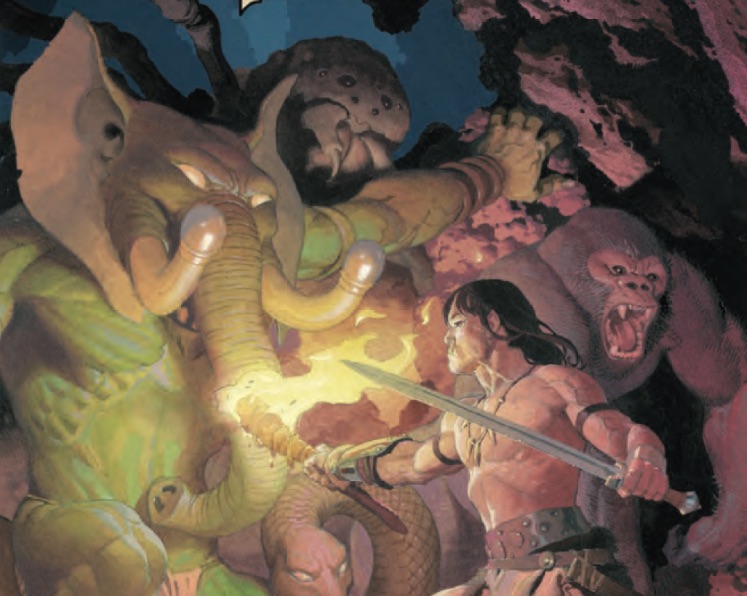 “Conan the Barbarian” #9 pits our stalwart barbarian against a bevy of previously vanquished horrors in a tight, well-paced issue. Warning: spoilers ahead. 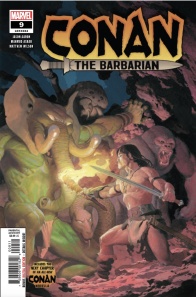 Cover by Esad Ribic
Written by Jason Aaron
Illustrated by Mahmud Asrar
Colored by Matthew Wilson
Lettered by Travis Lanham THE BEASTS OF CONAN’S PAST REAR THEIR FEARSOME HEADS! Gigantic spiders, man-apes, human-faced serpents, godlike aliens…CONAN has faced them all and lived to tell the tale! But as these creatures from the past return, do they presage a doom yet to come – one Conan is powerless to stop? Don’t miss this surprising turn on the march to the climax of the epic “LIFE AND DEATH OF CONAN”!

“Conan the Barbarian” #9 continues to ramp up the tension toward our inevitable finale. Aaron’s choice to tell Conan’s story in flashback goes a long way toward amping up the drama, but it also lets him echo Howard’s original nonlinear storytelling trajectory. By picking episodes from Conan’s life, it’s easy to build a measured portrait of the man in various situations, and comics are the perfect medium in which to experiment with vignettes. Aaron’s set a steady pace and fully situated us in each story with the same vigor, melodrama and zeal that Howard brought to his stories, but there’s a lovely grim quality to Aaron’s writing. Tragedy is inevitable – we know Conan’s poised on the edge of the void, and Aaron manages to pull that funereal quality through to a bittersweet point at the end of issue #9. It’s not always easy to balance the melancholy and mirth of the iconic barbarian, and Aaron has gotten it right so far.

Asrar’s art is just as dynamic and effective as ever, and seeing the Conan rogues’ gallery on display is a joy despite the deadly serious tone of the story. Thak, Atali’s brothers, Stygian serpents, Jhebbal Sag’s hideous swamp creature and Yag-Kosha (a personal favorite) all feature, among others, and are a great nod both to Conan’s comic and pulp roots. Aside from being a clever way to sandwich all of these villains into this particular Conan mythos, Asrar’s ability to portray each beast in grotesque clarity makes the wild action scenes that follow all the more enjoyable. Conan biting into Thak’s shoulder is at once grisly comedy and solid horror, and that vibe is exactly what we want out of the Cimmerian’s adventures. Razazel is appropriately esoteric and disturbing, and Asrar sacrifices layout intricacy for bold, big swaths of art that keep the action measured, detailed and exciting. The wanderers who accompany Conan in the depths are spectral and strange, and the Leech-Men are appropriately spindly, overwhelming and gross.

It’s not easy to draw Conan. He must be at once lithe and muscular, brooding and precise, imposing and stealthy and embody all of the contradictions Howard always used to full effect. It’s impossible to say how a man of his bulk could move with perpetual panther-like grace, but it was an adjective Howard used often, and it’s important to his characterization. Asrar captures the prominent brow, hulking muscles, graceful combat and ultimate menace of Conan. He practically smolders off the page, and the final panel of him cutting his way out of the Leviathan perfectly encapsulates Aaron’s earlier note, also a Conan classic, that he’d never met a specter that wouldn’t fall to steel. Whether we choose to believe Howard in his accounts of Conan appearing to him with menace to compel him to write, there’s a gravity to this character that has to be present to sell any adaptation of his adventures. Asrar more than delivers.

Of special note in this issue are Wilson’s colors, because this is one of the weirder, horror-based issues of this book so far and the palette more than delivers. The underground blitz is done in an array of sick rainbow hues, with each creature picked out from the eerie backgrounds in a unique color. Conan and his companions are largely done in washed-out skin tones and browns for tonal and narrative contrast. As the caverns and horrors thrive, so do the men and women who’re trapped within diminish. It’s a nice visual cue that helps us see Conan as slightly out of his depth, and Wilson’s careful attention to the technicolor nightmare sets off Asrar’s trademark scowl and hulking menace in a delightful, visually stimulating way.

Lanham’s lettering is, as always, precise and well-placed. There’s a lot going on in this issue: lots of bodies on the page, lots of fighting and lots of grand, sweeping character design and explosive action. Lettering over intricacy like this is hard, but Lanham always finds the perfect spot for balloons and narrative boxes, and the burnished earth tones in those boxes has done a lot to brand the book effectively. The ornate font isn’t too precious to read clearly, and adds that hint of sword and sorcery to amplify Aaron’s tone.

“Conan the Barbarian” #9 ends on an emotional cliffhanger, as it should, and as we head into the final issue we’ve come full circle through Conan’s first and last encounter with Razazel. Nothing’s ahead but misery and torture for our weary barbarian, and the team’s done well to put the often-invincible Cimmerian in real peril. This is more difficult to do than we might realize, because there’s nothing Conan can’t chop through, outrun or muscle to the ground, and Howard didn’t always delve into Conan’s weaknesses or fears. Aaron, Asrar, Wilson and Lanham have done an excellent job of putting those on display throughout this run, and the finale is set to pop off in a delightful way.

Final Verdict: 8.5 – “Conan the Barbarian” #9 delights with a trek through Conan’s rogues’ gallery and promises an explosive conclusion.