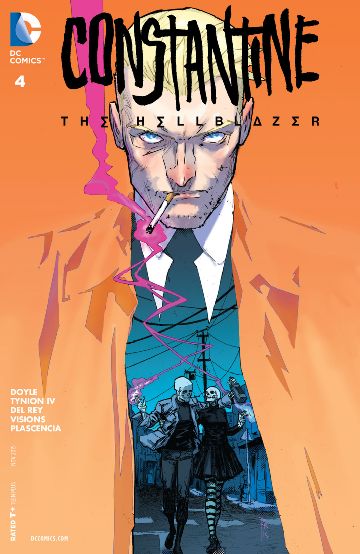 As he scours the mystical underworld of London, we get a look at more of his not-so-great moments in the past, John comes face to face with more than one demon. 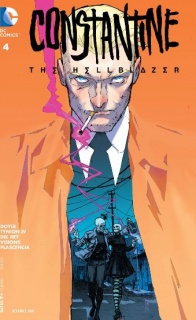 Some very, very, very bad news sends John Constantine on a magical bender through the darkened streets of London. This one’s gonna hurt in the morning.

Let’s talk about density. Density is the the mass of a substance per unit of volume. For all those looking for literary context then “density” is essentially the feeling I get when I there seems to be more content than actual pages. I say this because apart from this being the best issue of the series so far, it is mad heavy on character work for John Constantine. Plot progression takes a back seat as a drunken Constantine as he tries to make headway on his current mystery, while reminiscing on some really crap behavior he has performed in the past, that’s finally come to bite him in the ass.

And it’s everything that first New 52 Constantine series should’ve been.

Admittedly, that could also have to do with not being roped into an 18-part crossover, but regardless, when John was brought into the same universe as characters like Superman, they’d lighten him up. However, Doyle and Tynion bring John back to that one true fact about him: John may occasionally do good things, but that’s not the same as being a good person. He’s a bastard. It’s especially true in the flashbacks to days gone by and his relationship with the woman Veronica Delacroix. Let’s face it, for all the suaveness and “bad boy” charm, John really did treat her like crap. And it effects John to the present day, as he drunkenly makes his way from a record store, to chastising an audience at a magic show, to an old library.

Someone made a comment that the writers are being overt with Constantine’s bisexuality. First and foremost… they really weren’t. Think the only expression of that in this issue was John drunkenly hitting on the male owner of the record store. And second off, who the hell cares if they were being overt with it? It’s part of his character that has been ignored so much. In fact, something I have applauded this book for is that they express his sexuality in a way that makes sense for the character. If it was expressed in the way it is in “Midnighter” (another book I give kudos to for this), it wouldn’t be as strong to me. John is a subtle, behind the shadow kind of guy. He’s not all in your face luke Lucas Trent. So, in summation, Doyle and Tynion are bringing an important character trait to Constantine and doing it in a great way.

Now let’s talk about the sexy as hell art.

I have never heard of Chris Visions prior to this issue, but this man deserves to be on more comics. Depicting the scenes in the past, he has an art style reminiscent of Rafael Albuquerque (Young!Constantine does have some similar appearance to Skinner Sweet of “American Vampire”). While Albuquerque can be a bit more angular, Visions has a much smoother, yet just as intense, line to his characters. Such scenes like a band playing in some seedy, broken down, probably condemned theater building are rendered in such badass and, let’s face it, “sexy and bad for you” ways that I approve of. Visions also able to dial it down to more intimate scenes, such as a look at John’s table with booze, cigarettes and dead animals (kudos to letterer Tom Napolitano for his work on that image) as well as the heartbreaking last scene between Young!John and Veronica.

Del Rey’s pencils in the present day are a bit more sombre as John stumbles through London. There’s a heaviness to all her scenes as the world presses in on our protagonist, emphasized by the heavy use of shadow. Plus, every showing of John’s face wonderfully depicts the miserable state the character is in, regardless of how many false laughs he’s getting at the expense of those around him. And then, tentacles! Del Rey immediately is able to flip from quiet to terror as she introduces the enemy that John has been facing, in all it’s squishy, noodle-person mouthless horror. It’s so pretty.

And the glue holding this art team together is colorist Ivan Plascencia. Between this book and his work on the Image book “Rasputin”, he’s becoming one of my favorite colorists. He gives off, what I’ve called, the “malicious glow”. The kind of glow reserved for candlelight or lights on a stage that brings the macabre in full force. That glow is more than just the power behind those aforementioned scenes. He also picks the right kind of blue for the multitudes of spirits in the past and present that follow John around.

I once again have to give a nod to letterer Napolitano. Apart from the newspaper clipping words he used above, his choice of dialogue balloons for drunken John is absolutely perfect to help convey the state of the character.

Final Verdict: 8.9- This is the John Constantine we deserve.