The pieces for “Coraline” were all there. Based off one of Neil Gaiman’s best novels and adapted into comics by one of the medium’s preëminent artists, who, no less, had already expertly translated Gaiman’s work several times, it was almost a guarantee this book would be something special. However, the comic adaptation ends up falling flat, never achieving the unnerving highs of the original novel or the breathtaking awe of P. Craig Russell’s other work. If anything else, “Coraline” is a prime example that not even the best work from some of the medium’s brightest talent will always land effectively. 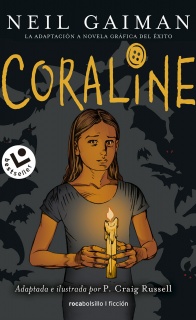 Cover by P. Craig Russell
Written by Neil Gaiman
Adapted and Illustrated by P. Craig Russell
Colored by Lovern Kindzierski
Lettered by Todd Klein
When Coraline steps through a door in her family’s new house, she finds another house, strangely similar to her own (only better). At first, things seem marvelous. The food is better than at home, and the toy box is filled with fluttering wind-up angels and dinosaur skulls that crawl and rattle their teeth.

But there’s another mother there and another father, and they want her to stay and be their little girl. They want to change her and never let her go. Coraline will have to fight with all her wit and all the tools she can find if she is to save herself and return to her ordinary life.

By now we all know the story of how a bored and adventurous little girl accidentally stumbles into an alternate version of her world, constructed by the wicked bedlam who wants to sew buttons into her eyes and feast on her flesh. Coraline might be my favorite thing Neil Gaiman has ever written. The story is consistently eerie, occasionally terrifying, and deftly delivered, full of performing mice, talking cats, dogs with bat wings, all with one precocious protagonist at the center of it. When the novel was originally released it included illustrations by Dave McKean. Full of chiaroscuro rendering and expressionistic delivery, these pictures became as much a part of the book as Gaiman’s text. (Which is also why I think it’s ridiculous there’s a version of the book out there illustrated by Chris Riddell.) Enough so that even Henry Selick’s 2009 film adaptation heavily borrowed from its aesthetic.

Which meant by taking the job, P. Craig Russell had a task set before him. He needed to deliver a book able to stand on its own as a comic while also preserving an atmosphere evocative of the novel original. McKean’s work casts a long shadow over it, with its hard abstract angles and twisted designs. Which is not Russell’s aesthetic. P. Craig Russell is a sort of classical cartoonist, a formalist. His work tends to break the page down into rhythms and beats, his control of panel-to-panel flow is frankly unparalleled. His men are all gorgeous, his women powerful. The scenes are operatic and grand.

None of this fits well for the moody and horrifying “Coraline.” The first thing we notice with the graphic novel adaptation is how soft the artwork is. Russell has said he experimented more with pencil drawings for this work, not inking the lines but scanning thicker pencils into the computer and darkening them. This ends up taking away any pure black value from the material. Lovern Kindzierski maintains the usual watercolor palette he uses for most of Russell’s work, but without any of the deep blacks you get from inks, there’s nothing to offset any of the colors or really make their impact stick. On top of that, I don’t think neither creator does much with the color scheme. The transition between the real world and the bedlam’s world, is simply a purple block, not enough to capture the magic or mystery of this new place Coraline’s visiting. It gets worse during the chase back through it near the end.

You see this a lot in Russell’s beloved silhouettes. Instead of filling in the forms and figures of his characters with his usual black ink, Russell only provides an outline while Kindzierski throws in a slightly darker color to fill out the space. For the most part, pastels make up the majority of the book’s palette, creating something overly romantic; even the harsher hues don’t have a huge impact, since there’s not really any contrast in the work. It’s like Russell and Kindzierski were going for something dream-like or classically gothic (I’m talking like the candlelight of Frankenstein or something), but instead turned in, I don’t know, something more Victorian.

This softness also comes through during the more horrifying sequences. Russell does attempt to build up the tension to these scenes, and when he turns in a monster you can look at it and tell it’s a monster and is supposed to be scary. For instance, take a scene like Coraline’s confrontation with the Other Father in the basement. He’s deflated, acting against whatever will the Other Mother happened to give him. There’s a shot where he lunges at Coraline, but it doesn’t stop our heart or seep into our nightmares. Rather, it kind of reveals the silliness of the posing, the awkwardness of the Other Father’s attack. The soft presence makes the book, on the whole, toothless.

Perhaps the most egregious example of this is the Other Mother herself. Russell does not do well with having her slowly lose her humanity and presence as Coraline continually gets the advantage over her. Even near the end, when she’s disintegrating more into her spider form, she doesn’t feel like a threat.

I can understand why Russell tried so hard to make the aesthetic different from the novel. Obviously, when taking on a project like this, you want to maintain some measure of your own style and voice. He has mentioned during the scripting phrase, he made a photocopy of the book without any of the original illustrations altogether. But Russell tries to do the complete opposite of McKean (and Selick), taking an expressionistic abstract work and turning it into a soft little fairy tale. Nothing feels dangerous or thrilling or spectacular. Nothing on the page comes to life. “Coraline,” as a comic, cannot escape the presence or aesthetic of its original presentation, and even someone like P. Craig Russell misses the mark.

“The First Kingdom” Vol. 1: The Birth of Tundran