With Endgame right around the corner, people are probably getting into their MCU re-watches. Now there are a couple that you can skip (I’m looking at you, Dark World) and some you should revisit. For my money, Guardians of the Galaxy is a definite re-watch. It’s one of the most important projects by Marvel Studios and really took the MCU to completely new heights. There’s a talking tree and raccoon! Not only that, but at this point you’re completely used to them. The Guardians were such a wild concept, even some comic fans were iffy on it. Not to mention Guardians has the best MCU post-credit scene, in my opinion. I mean, come on. Howard the Duck…are you not entertained?! 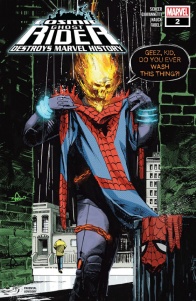 Written by Paul Scheer & Nick Giovannetti
Illustrated by Todd Nauck
Lettered by VC’s Travis Lanham
Colored by Antonio Fabela
THE DESTRUCTION OF MARVEL HISTORY CONTINUES! Can Cosmic Ghost Rider take up the mantle once Spider-Man is no more? With great power, there must also come total irresponsibility! Take a seat and prepare to have your childhood memories destroyed.

Cosmic Ghost Rider is another bizarre concept. Seriously. The Marvel Comics universe is full of strange characters (see the aforementioned tree and raccoon) and the Marvel multiverse is full of even stranger What Ifs? but this one’s really out there. Personally, I wrote the character off the first time I laid eyes on him. I couldn’t even get behind the idea because of how ludicrous it seemed. I’ve changed my tune though. The character works. The crazed Frank Castle from an alternate future fits right in with the other unique cosmic characters in Guardians.

‘Uncle Fredo’ covers a large swath of Peter Parker’s history. He talks about Spider-Man’s fights against the likes of Venom and Sin-Eater, team-ups with Daredevil, his black suit phase, ‘Spider-Man No More!’, the Clone Saga and more. Maria worries about her Frank and ‘Uncle Fredo’ offers some comfort, using the stories to help explain Frank’s current headspace. The issue ends with the brutal mob hit that killed Frank’s family being ordered, their deaths getting closer.

In these first two issues, “Cosmic Ghost Rider Destroys Marvel History” has been very heavy on, well, history. That is very, very important to note. Some comics you can pick up and your knowledge or lack thereof won’t affect your experience that much. So far, this mini-series isn’t the type of comic. It isn’t really new reader friendly…might not be too friendly for regular readers either. ‘Uncle Fredo’ recaps some Spidey deep cuts here. This issue reads like the writers had specific Spider-Man comics they took issue with back in the day and decided to air out their grievances on the written page here.

So, bear in mind, my personal lack of knowledge on the Spider-Man stories here definitely impacted my feelings on the comic. I’ve been reading comics for twelve years more or less and I was lost, to say the least. Sin-Eater and Jean DeWolff are simply before my time. I was more familiar with the Fantastic Four stuff in #1 so I liked it better.

The creative time is really trying to cover a lot of ground here and it shows. The comic might have been stronger with a focus on one or two Spider-Man tales. What we get here is way too much Spidey. The titular character is overshadowed by Peter, playing a more supporting role rather than the main one. Cosmic Ghost Rider’s humor and particular brand of zaniness only comes out in a throwaway quip here or there, most jokes falling flat for me (Humor is hit or miss for pretty much everyone though, you might have loved them.)

My favorite parts of the comic were the segues between different stories. Frank talking with Maria and spending time with family allowed for more human moments. It was nice to see ‘Fredo’ comfort Maria when she’s feeling vulnerable and give her valuable insight. The writers touched on Frank’s PTSD and humanized the character in those parts of the issue. The conversation also developed Maria’s character beyond her just being Frank’s dead wife.

I enjoyed the artwork as well. I’ve always enjoyed that effect or filter that comics sometime use to make the flashbacks look like old pulp magazines. Todd Nauck’s art is solid throughout. His style is a perfect fit for superhero action like this. I especially liked Uatu’s silent face of exasperation (really quick, where is the Watcher? That was a solid last page stinger in #1 and this issue doesn’t follow up on it all) as well as the spread with the panels separated by Spider-Man’s webs. That was a nice touch and it sure helped I actually knew those Spidey moments. Still, the strong art doesn’t make up for the comic’s weaker areas.