Here we are, halfway through the mess that is “Countdown.” The turning point, you might call it. Don’t believe me? Ask the cover to issue #26: 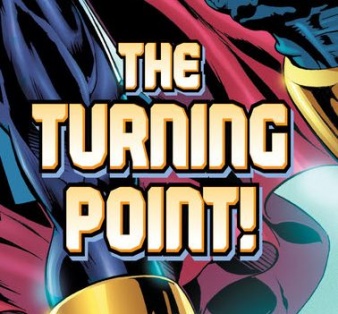 But we’ll get there in a moment. First things first, the “highlight” of this batch of issues, in terms of actually advancing the plot rather than quality, is the Donna Troy and friends storyline, which finally seems to be getting some semblance of direction. There’s a bit of universe-hopping that mainly serves to take up space and to make the reader go “Hey, I remember that Elseworld!” but there is at least some semblance of meaningful conflict. First, the team stops in Earth-3, where good and evil are switched, and have a tussle with the Crime Society. By my understanding, this should be a slightly different version of the Crime Syndicate from Morrison’s “JLA: Earth-2,” but Kyle remembers meeting them before. Whatever, that’s the least of this series’ problems. When the gang escapes via Bob the Monitor’s universe-shifting powers (which seem to be the only useful thing he can do), Earth-3’s Jokester, a good guy version of the Joker and father of the recently deceased Duela Dent, hops in with them. After they’re gone, the Monarch (remember him?) appears on this earth and recruits Ultraman et al. to his cause. Speaking of, turns out his cause is just multiversal domination. Boring!

Our group of walking continuity errors plus Kyle Rayner then end up on Earth-8, and soon find themselves in the clutches of this universe’s version of Lord Havok and the Extremists. I’ll admit, I like to think I know a fair bit about the DCU, but I had no idea who these guys are besides “bad guys.” Shortly thereafter The Monarch and his cronies show up (including the Crime Syndicate!), as does the as-of-yet unnamed big bad monitor. Yet another fight breaks out, this time with various funny results. First, Jason stabs one of the members of the Extremists, a large fishman type guy. Although it seemed pretty nonlethal on the page, I guess it was supposed to be a heinous blow because pretty much everyone in the room, including the bad guys, stops what they’re doing to gawp at Jason. The big bad Monitor attempts to blast Kyle but instead catches the Jokester, who is promptly mourned by no one (understandably, since he had been with the team for, like, two issues). At least people pretended to care Duela. Finally, there’s an extremely obvious fakeout where Jason pretends to switch sides, taking Bob’s gun (he has a gun?) and blasting an incapacitated Donna to prove his loyalty. Shortly thereafter Bob’s plot-relevant teleportation powers kick in and he absconds with the whole team. In an extremely tenuous explanation, Bob says that he knew Jason was going to do this and therefore powered down his gun so it wouldn’t be lethal. That still doesn’t explain how Jason knew Bob would know, but whatever.

The other major story advancement in this batch of issues is that Mary Marvel has (effectively) committed her first few murders! After finally meeting with Eclipso and learning that she is the true source of her newfound powers, rather than simply Black Adam, Mary turns some Turkish security forces to stone for the crime of being a bit rude to her. So yeah, basically murder (at the very least, she’s an accessory as shortly thereafter Eclipso crushes one of the statues’ heads). This is played off in a very understated way which, perhaps, may have been intentional, but the architects of “Countdown” have done nothing to make Mary’s descent to villainy seem organic. It’s solely fueled by the “shock” of seeing a character traditionally portrayed as sweet and innocent go bad, something that isn’t shocking if you have read more than five books. Mary killing for the first time (and later basically torturing Turkish farmers) should be a big deal, but it instead evokes a feeling of “eh, this is clearly where they were headed.”

I will say, at this point I kind of like how Pied Piper and Trickster are just coasting from one off-screen event to another. First, we had the lead-up to and the fallout of the murder of Bart Allen, then the wedding of Black Canary and Green Arrow. We’re still dealing with that in these issues, one of which primarily focuses on Dinah’s bachelorette party. The only thing this party has to do with “Countdown” is that Piper and Trickster very, very briefly bumble through it, but the vast majority of the issue is dedicated to depicting what a bunch of guys imagine a bachelorette party is like (male strippers, attempted underage drinking, you know the drill), only with superheroes. When the villains’ attack on the wedding happens, Piper and Trickster make a break for it and soon find themselves instead on the narrative outskirts of the mostly forgotten miniseries “Salvation Run,” where a bunch of villains were captured by the Suicide Squad and sent to a different planet. Of course, they aren’t going there themselves, that would require too much stuff actually happening in the pages of “Countdown” rather than just being referenced in dialogue, but they do manage to save Two-Face from being taken away. Will this have any relevance going forward? Who knows!

Beyond these, the remainder of the plots are mostly spinning wheels. Jimmy stays with CADMUS for a bit for them to run some tests on him, slips through some grates when his powers go haywire, gets found by the Newsboy Legion, and then not-quite abducted by the New God Forager, who requests his help in solving the death of the New Gods (speaking of, Barda died off-screen in the aptly named “The Death of the New Gods”). The Jimmy portions of the story up until this point had been some of the brighter points in the series, but in these few issues they’re nothing more than part of the bland slurry that makes up most of “Countdown.” Karate Kid meets Brother Eye, who also cannot identify whatever is wrong with his body, but does detect a similar virus underneath Bludhaven (which, if you recall, was left a smoking radioactive crater after the events of “Infinite Crisis”). Holly and Harley make their way to Themiscyra and are subjected to some grueling bootcamp-type stuff like, uh, fighting giant sharks and being chased by dogs. There’s also some weird one-page scene with Mr. Mxyzptlk being snatched from his reality by an unseen force. It’s all a bit of a mess that doesn’t seem connected in any way, which wouldn’t be so bad if it was actually, you know, good.

But what if I’m a fool and everything is actually connected?

That’s the point of #26, a tedious, tedious comic if I’ve ever read one. The entire issue is told through the framing device of the big bad Monitor explaining to the reader — uh, I mean, the other Monitors how all these different factors are a threat to the entirety of multiversal spacetime. Most obviously, there’s the issue of both Donna’s group of heroes and Monarch’s group of villains traveling around the multiverse itself, picking up randos and generally making a mess of things. Besides that, there’s the death of the New Gods, plus its connection with whatever is happening to Jimmy, and the instability that could follow in the birth of the Fifth World. Karate Kid doing nothing interesting in the present is apparently a risk to time, while Mary’s inordinate amount of newfound power has destabilized magic. Since all of this is happening at the same time, the big bad Monitor believes there is a hidden power influencing all of these for some unknown reason, and so he convinces the other Monitors to go to war. Against what/who? It isn’t really stated, so I assume it’s some War on Terror or Drugs thing where they plan to war on abstract concepts in a way that will screw up the lives of innocent people or minor offenders. It’s a hilarious issue to be getting midway through the series, a desperate reassurance from the writers that “Don’t worry, this all fits together!” in hope that readers will stay interested. Lucky for them, I’ve already committed myself to reading all of this slop, so I don’t need to be convinced!

Finally, #26 ends with a teaser of some obscured, black-clad figure with a cape menacing Earth-3’s Luthor. While his identity isn’t revealed in the pages of that issue, the fact I’d seen later covers of the series meant that I know exactly who it is, and this made the “interlude” one of the first things to bring a (semi-ironic) smile to my face. 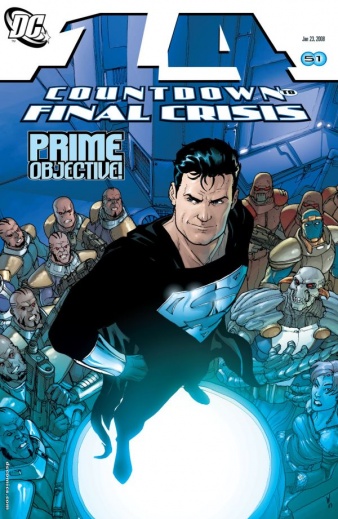