With the release of Crackdown 3 last Friday, let’s look at “Crackdown” #1, the tie-in miniseries debut. 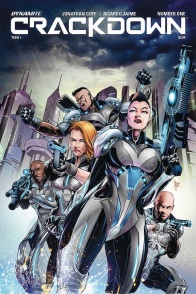 The hyper-powered world of Crackdown (Xbox) has made its way to the comic page! In the not-so-distant future, civilized society is more plugged-in and interconnected than ever – but criminal organizations are growing more connected as well, forming unholy alliances, and plotting for an unprecedented campaign against the world. When a series of devastating blackout attacks plunge major metropolitan areas into darkness and chaos, the global population is terrified, traditional law enforcement is overwhelmed – and it’s up to The Agency, an elite international crime-fighting task force, to restore peace and deliver justice, by any means necessary.

Although also having some experience with “Spawn,” much of Jonathan Goff’s experience in writing comes from video games, including Crackdown 3 itself, a focus that definitely shows itself on the pages of “Crackdown” #1… and not to the best of effect. Unlike many other video game tie-in comics, “Crackdown” isn’t given enough room to slowly introduce people into the world, perhaps in part due to it being a four-issue miniseries, but even that excuse falls flat when placed against other, identically lengthy tie-ins to other properties, Goff’s writing doesn’t even give an ounce of the depth afforded to them, and on the whole seems rather slapdash.

From the get-go, Goff’s writing works a mile a minute, cramming internal monologue and conversation into panel after panel without giving readers much room to breathe. Rather than trust the artwork to tell a story, Goff’s dual duties of writer and letterer seem to induce him to take the stage far more often than strictly necessary. If internal monologue could be considered reasonable, even necessary to expound upon the thoughts of the protagonist, that would be one thing. However, rather than add real depth to the story or explain some of the elements (such as the technological powers, the various scars and such on some members), the monologues fall into the same clichéd traps as the outward dialogue with the Voice of the Agency. Goff’s narrative seems to openly admit that the lines given by the “VOA” are market-tested clichés to psyche up Agents, but any digs at how by-the-numbers those one-liners are fall apart as soon as it becomes clear that all of the written words are that predictable from both the Agents and the gang members, and not even to the point of trying to talk down about the de facto propaganda.

The overuse of dialogue extends to the point of a lack of realism. Entire pages are spent with the Agents talking about how they are going to handle a gang… while said gang is right in front of them and would, by all right, have begun opening fire, especially if they are as volatile as the text seemed to imply. In effect, the fact that the Agents can have complete conversations before a fight makes it seem akin to a tabletop role-playing game where talking is a “free action,” or like they are caught in a cutscene in a game, rather than actually in a situation with any danger whatsoever.

Each of the characters in the issue are easily identifiable by the classic archetypes of a military team in fiction, each and every one being in the fight to fight in and of itself. The nervous rookie, the brash bruiser, the relatively cool-headed sniper, the sharp-yet-enthusiastic leader; all of these types are accounted for. The only exception seems to be the demolitions expert “Boomer,” who appears to be the only sane woman who doesn’t take nearly as much open pleasure in combat as her fellows during the operation, but even she is only seen that way due to a lack of many lines otherwise. With a cast that can be easily drilled down to a set of tropes instead of actual individuals, when they can easily be seen as “plug and play” roles rather than anything used to distinguish them from others of their type beyond a lack of originality, why should the audience care about what happens to any of them?

In all, Goff may be a good writer for some things, but by trying to translate his work on video games directly into the comic medium (as seems to be the case here), he shows the detriments of such an approach in how unoriginal such writing can end up becoming in the process.

While Ricardo Jaime’s artwork does have a certain dynamism to it, that seems to be the main good thing to say about its execution in “Crackdown” #1. The overuse of double-page spreads just goes to show how little story there is to tell, with such spreads taking up a sizable portion of the book. Furthermore, Jaime makes abundantly clear that he is more comfortable with non-combat scenes than combat ones, with most of the gunfire being more told about than actually seen (even as the cast claims to be shooting) and explosions and the like primarily happening off-panel to a degree that the use of said explosives could probably be removed from the story altogether, especially when it is replaced with some panels that are completely repeated in almost every way except the dialogue itself. Considering the fact that “Crackdown” #1 is a combat-centric issue, the fact that so much focus is given to not showing combat or otherwise drawing it out for the sake of more dialogue is extremely jarring, to the point of yanking readers out of the experience altogether.

Natalia Marques tries to make up for the lackluster storytelling and the insufficient artwork, but she can only do so much. The heavenly blues of the holograms used by the Agents help to distinguish them from the gang members, and the bright green of the unknown object at the end of the issue does present a good change of pace, but even the best of intentions is sadly not enough to save the rest of this tie-in’s debut.

Final Verdict: 4.0– “Crackdown” #1’s artwork is dynamic but missing key elements to coexist with the story, which itself is rather lackluster, both elements held above others primarily by the colors.