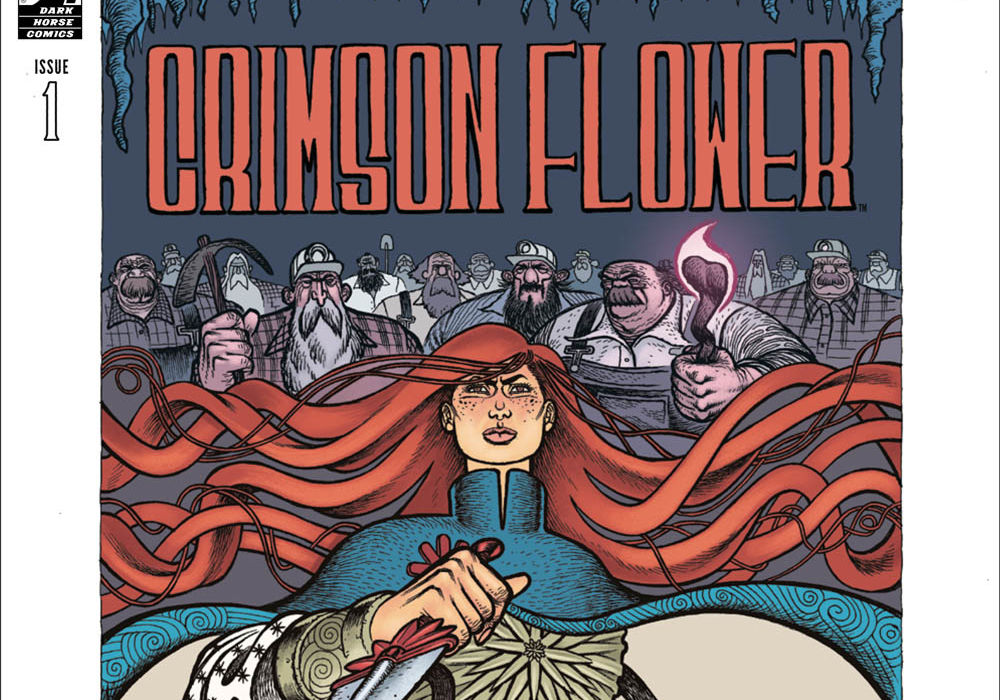 The Russian people and Russian culture tends to get a bad rap in comic books, especially in American comics. It’s not that difficult to see why, the Soviet Union was America’s greatest antagonist for a significant part of the 20th century and lots of American media, especially cheap media that was created for children such as comic books, had an annoying habit of reducing the culture and mindset of all of Russia to a handful of stereotypes.

The thing is, once you get past the traditional Russian stereotypes of vodka, bears, and communism there’s a very rich tradition of folklore, myths, and legends that are perfect for all sorts of stories, especially stories like “Crimson Flower” #1. 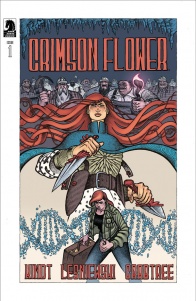 After losing her family in a violent home invasion, a woman uses folk tales to cope. In a blood-soaked journey toward revenge, she tracks down the man responsible for her family’s deaths, only to discover a startling government plot-to weaponize folk tales and use them to raise children into super assassins.

“Crimson Flower” #1 follows the adventures of an unnamed girl living in post Soviet Russia. She works as a sales rep for a pharmaceutical company all while working to track down the assassin who killed her father when she was a little girl. Her detective work takes her to the hide out of a runaway assassin who used to work for the state, and into a world that seems to blend reality with traditional Slavic folktales.

The script for “Crimson Flower” #1 comes from long time comic book writer Matt Kindt, who is one of those names that has been floating around the comic book world for a while and has a reputation for producing very good books that are a mental and emotional gut punch. The book is well paced and has a good fight scene with a state trained assassin who feels like he comes out of a more traditional superhero comic, but the real highlight of the book are the tiny clues that Kindt peppers throughout the book to make the reader uneasy and suspicious. On the surface, the protagonist is an ordinary salesperson, but Kindt peppers strange hallucinations throughout the book and seamlessly blends reality with folk stories in a way that makes the reader question what is real. That–coupled with the protagonist’s fighting skills and drug habit–make it clear that there is something strange going on and the girl is probably not what she seems to be.

If “Crimson Flower” #1 has any problems with the script, it’s that long time fans of Matt Kindt will probably recognize that this is the kind of story that Kindt has told before. A protagonist probing into their past and discovering that they have a connection to some deep state conspiracy that they were previously unaware of is a recognizable trait of Kindt’s work, especially anyone who’s a fan of Mind Mgmt. While this is not a very serious problem, just because this is a familiar type of story for Kindt doesn’t mean you can’t enjoy the details, it doesn’t allow the author to flex his creative muscles and try something new.
The comparisons to Mind Mgmt are even more apt when it comes to the artwork. Kindt seems to enjoy working with artists who have styles that initially don’t appear to fit the needs of the story, but are visually striking and interesting. That tradition continues in “Crimson Flower” #1 with artwork by Matt Lesniewski and colors by Bill Crabtree.

The artwork on “Crimson Flower” #1 is weird and takes some getting used to, but once you adjust your mind to Lesniewski’s artwork, it manages to be functional and beautifully unique at the same time. While the backgrounds and setting of the comic are highly detailed and well drawn, the main focus of the comic rests on the characters. Lesniewski draws the the people who inhabit “Crimson Flower” #1 with highly exaggerated expressions and a complete lack of classical proportion. Most of the characters have hands, heads, and feet that are either way too big or way too small for their bodies, and when they smile or yell in some of the close up panels it looks like their skin is stretched a bit too far over their faces. It’s not the prettiest artwork ever seen, but the weird proportions coupled with heavy inks and Crabtree’s dense colors combine to create a book that looks like a blend of Soviet bloc animation from the 1980’s, traditional Slavic wood cut art, American underground comix, and one of the weirder cartoons from an issue of MAD Magazine.

“Crimson Flower” #1 is a book that looks strange, feels strange, and delves into a folk tradition that will feel strange and unfamiliar to most Americans. However, it’s a familiar story to anyone who has followed the career of the book’s author for any period of time and the creative is working very hard to create a book that feels wholly unique and interesting. It’s just the first issue, but it feels like there’s a whole lot more just waiting underneath the surface.

Final Verdict: 8.9- The art style is strange, but it’s an entertaining book that presents a fun mystery with a cool subject matter, and if you liked Matt Kindt’s Mind Mgmt you’ll probably like this.