John Arcudi and Mindy Lee are taking the Hellboy Universe into uncharted territory in “Crimson Lotus.” Like “Lobster Johnson,” this is a series that very much has its own identity, while still feeling connected to the larger whole. 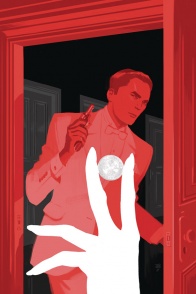 Shocked by the news of an agent’s death, spies Shengli and Dai must parry the Lotus again when they discover she is even closer than they thought. And can the pair avoid getting caught between Japanese soldiers and the Lotus herself?

We see a lot of witches in the Hellboy Universe, and most of the time they’re bad news—power comes at a price and it seems it’s far easier to buy it from devils. However, there are still those that practise witchcraft for good. The warlock Sir Edward Grey is the most obvious example of such a person, and certainly Sandhu (from “Rise of the Black Flame” and “Rasputin: The Voice of the Dragon”) is another. Now it seems we can add Shengli to the list. And she can (mostly) hold her own against the Crimson Lotus, one of the more powerful witches of the 20th century, so that’s pretty cool.

It’s funny, in the twenty-five years we’ve had the Hellboy Universe, this sort of magical duel doesn’t happen very often. In fact, I’m struggling to think of even one suitable comparison. I’ve said in our previous reviews that “Crimson Lotus” is delving into unexplored territory in the Hellboy Universe, and never has that been more true than in this issue. And Mindy Lee and Michelle Madsen seem to relish the opportunity to dive into this stuff. The extended action sequence of this issue is, for me at least, the highlight of “Crimson Lotus” so far.

Magic in the Hellboy Universe is usually understated, so I appreciated that in a flashy battle sequence like this it’s still rooted to some physical reality. Shengli can’t just shoot endless energy blasts, instead she shoots a blast of light that transforms into rope darts. And with the Crimson Lotus, as we’ve seen before, it’s never entirely clear what’s real and what’s illusion with her powers. The crackling energy on her hands is more overt than I’m used to from her, though. I’m used to a Crimson Lotus battle being one largely of wills or in the mind. But this works and I’m already looking forward to round two.

The further we get into this series, the more I’m convinced that Shengli is its true lead. Agent Dai, the assumed lead, is actually the MacGuffin. However, the way John Arcudi has set this story up, it could go anywhere. There’s little things throughout that make me very uncertain, like Miryoku, the little girl at the beginning of the first issue, who we assume will grow up to become the Crimson Lotus… except that the Crimson Lotus’s real name is Yumiko Daimio… or is that merely a name she assumes later? Or perhaps the Crimson Lotus, like the Black Flame, is a persona not exclusive to one person, so potentially even the titular Crimson Lotus could die in this story. We don’t have that usual prequel problem where we know who lives and dies before the story begins.

There were a few rocky bits in the issue though. The final panel on the first page had a wonky eyeline of Shengli, which perhaps could’ve slid by if she hadn’t been front and center in a panel where we’re expected to read a strong emotion from her. Considering this was on the first page of the issue and it’s the first emotional beat, the panel missing its mark like that jumps out more than usual.

I’m still a little weirded out by Dai’s constant chatter to himself. In this issue some of it appears in thought bubbles, which are exceptionally rare in the Hellboy Universe, so they seemed almost alien on the page. That’s a personal quibble though, and “Crimson Lotus” is unique enough that it can stray more comfortably into this territory than when thought bubbles showed up in “B.P.R.D.: Hell on Earth—The Devil’s Engine.”

But there’s so much to love too. When the central fight of this story moves out to the streets of Harbin, Lee brings that environment to life beautifully, and it’s such a contrast to the interior fight, where the background is almost non-existent, mostly color. But it’s purposeful too. In the interior, the focus is on the characters and their powers. The background is practically irrelevant to the action of the scene. In the street, however, the environment is crucial to the story. We need to be able to tell where Shengli and the Crimson Lotus are in relation to Dai and the soldiers chasing him, and Lee is careful here to make sure those spacial relationships are maintained without drawing unnecessary attention. She uses the evocative heavy shadows of the background to put the focus on the mood of the scene, disguising its other mechanics.

Tonci Zonjic’s covers for the last two issues certainly evoke the promise of more great chase and fight scenes, and given that so far each issue has built on the previous and upped the ante, it’s a promise I feel sure this creative team can deliver. Speaking of Zonjic, I love the covers on this series, especially the way they stand apart from other Hellboy Universe titles without feeling stylistically disconnected, and the way they feel so unified as a set.

Plus, there’s that feeling of escalation too. Given what we’ve seen in this issue, #5’s cover suggests we’re in for a big finale.