This adult take on Freaky Friday brings our main characters together for a bit of self-awareness, with the right balance of art and text. But now that we’ve had this big reveal, it’s time to find out how this switcheroo came to be. 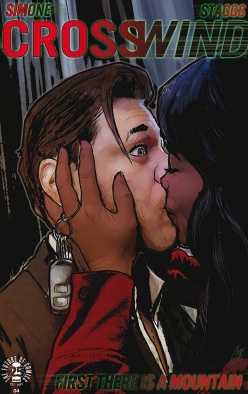 Finally, the worlds of Juniper and Cason are starting to collide. Someone has discovered that Juniper’s personality is in Cason’s body, and vice versa. This does lead to the two finally connecting with each other to figure out how the heck to get out of this predicament, but not before Juniper-as-Cason resolves some tensions in the family life, and Cason-as-Juniper finds himself in a sticky situation with his paramour Mika – and Mika’s fiance.  How much longer before their families discover the people they love are really not who they are – and how much longer before this discovery leads to violent ends?

Things are moving in the world of “Crosswind” and moving fast. Other publishers would likely stretch out the meeting of the minds over several issues, or wait further into the series before executing such a critical plot point. Gail Simone knows better, and gives us a reveal in the right place at the right time with all the right elements.  There’s touches of humor as Juniper-as-Cason and Cason-as-Juniper continue to navigate their new bodies, a meeting of the minds that does equal measures of both showing and telling, and two very compelling (but differing in intensity) cliffhangers (perfect stopping points  for the first trade volume). A body switching story sometimes requires a lot more telling than showing, and I’m happy that Gail Simone finds the right balance between words and pictures.  It’s very easy to want to telegraph every single action just to make sure the reader understands in such a complicated story, but Simone lets her words take backseat to the art at the appropriate times, and has her words fill in as context when artwork doesn’t always make things clear.

I do hope now that Juniper and Cason know what has happened, we start to explore how it happened.  What led to these two strangers swapping bodies, what triggered it? My prevailing theory is some form of emotional stress, similar to the theories that have explained time travel in the Outlander book and TV series. (In that series, it’s believed that heroine Claire Randall Fraser’s travel back in time was symptomatic of the stress she endured as a battlefield nurse during World War II.)

I’ve been a fan of Cat Staggs’s art from her “Wonder Woman ’77” annual and her work with the Her Universe clothing line, so I knew I was in for quality pencil, inks, and coloring with this comic. I have not been disappointed. Cat uses facial expression beautifully with care to detail to show the transposed souls, Juniper-as-Cason has a perpetual look of either anger or smug satisfaction on her face, enjoying her newfound bravado and confidence. Cason-as-Juniper walks around like a deer caught in headlights that’s trying to keep cool, calm, and collected. Using this technique allows, as I stated earlier, for writing that moves plot forward, as opposed to dialogue that has to telegraph every action and situation to ensure everyone is on the same page (pun intended).

(One purely minor thing that makes me happy: Juniper-as-Cason finally changed clothes! There is an interlude in this issue where she expresses bewilderment at being more feminine, which is understandable to a degree. But, more than a few days had to have passed in this world, and she was wearing the same red dress that she wore for dinner with the boss. I get that woman’s clothes might be confusing to a man trapped in a woman’s body, but there had to have been a pair of pants in the closet somewhere….)

This is the first issue in the series where I have not noticed small color changes to distinguish between the two worlds – which makes sense now that these separate universes have come together. Whereas the pencil and ink work shows a fine hand (take a look at some of the lines on Juniper’s face to see the careful hand – they are almost thread-like in thickness), Staggs uses blocks of color and layers of shade to play with depth perception, light, and shadow. While this serves well for backgrounds like a hotel room or kitchen, or panoramic scenes like Juniper’s street, it looks odd and out of place on people’s faces, especially given the detail paid to pencil and ink work. The eye can be drawn to it unintentionally, overlooking other important details – I fell victim to this in reading earlier issues, missing some of the detail that Staggs gives to show the switched personalities in bodies. I would caution against being too obvious with it in future issues. Praise is also to be given to Simon Bowland’s letters that work well with panel layout and the non-traditional panel shapes and their placement — you can feel the pain Jim feels when Juniper-as-Cason gives her husband a painful dose of medicine in the family jewels.

I also encourage readers to take a look at the interview in the afterword with transgender actor and writer Charles Battersby for perspective on transphobia that is present in body-swapping stories. Gail Simone met Battersby at a New York Comic-Con panel on transgender issues in comics, and his insights have helped avoid the comic from falling prey to some of these tropes — trans characters as villians or trans as a pure comic effect, just to name a fewsubtl;e . The inclusiveness and awareness makes this story all the better – educating in a understated way while entertaining and enthralling.  I can’t ask for more than that in my comics — or any of my entertainment, for that matter.

Final Verdict:  7.5 – We’ve hit on a closure of a particular arc with this issue (intentional or otherwise), and it was handled beautifully. No time to dwell on that — we’re ready for some answers to questions.