Charlie and Vita’s misadventures through LA feel like they’ve been on the Running Man. With one issue left in the opening arc it’s time for them to run The Gauntlet.. Hopefully they survive the experience. 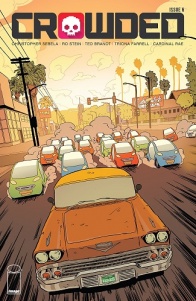 Written by Christopher Sebela
Penciled by Ro Stein
Inked by Ted Brandt
Colored by Triona Farrell
Lettered by Cardinal Rae
Trapped with the psychopathic streaming superstar Trotter on one side and all of Los Angeles carrying a weapon and a two-million-dollar-dream on the other, Charlie and Vita have only each other — and a few of the secrets they’ve been keeping from each other — to rely on for their survival.

For some reason I had been under the assumption that “Crowded” was a miniseries and would be wrapping up with issue #6. Vita, Charlie, and the creative team, aren’t going anywhere as the final pages and letters column make clear. The finale to the first arc, which appears to be titled ‘Hollywood News!’ per solicits, ties the current plot up and lays the infrastructure for the next arc and long term narrative sustainability on both a plot and emotional level naturally. Returning to the present, the ‘Hollywood News!’ finale reads like a final proof on how “Crowded” manages to excel at the tough balance of action comedy storytelling. The series’ success at being a well-balanced action-comedy is the creative teams understanding that both are derived from the same basic principles of a good setup and a punchline.

Perhaps it is because my understanding for comedy isn’t sophisticated, but most effective comedy in media tends to be the kind the audience can see coming with just a little twist on it. Effective comedy is as much about the rhythm and delivery as it is insight. “Crowded” is rooted in a satire of the gig economy, it is already excessive in how it blows that out into app based cops and robbers. This grandiosity allows the small character moments of Charlie teasing Vita and Vita’s continued exasperation at this hot mess to come through and provide that little twist on beats. As our odd couple make it through Trotter’s overdone mouse trap (or Douchebag Haunted House according to Vita), Vita loses her gun. Which is quickly found by Charlie, who Ro Stein and Ted Brandt have cartoonish motion about attempting to help in the background. Charlie trying to help in a deadly situation is the most consistent gag this series has had thus far, and it still plays like gangbusters here as it is one we are familiar with but now taking place at the moment of peak drama. That gag also acts as a nice bridge to another, more insightful, beat about how narratives and media condition audiences to consider the morality of a character in relation to animals. Ten minutes into the future, audience may rally behind an overly caffeinated faux-Twitch streaming assassin, but trying and hurt an animal puts you in the fast lane to social media outcast.

Through all this action and comedy, Vita and Charlie really come through. The art teams ability to create expressive eye work in the characters when things calm down for a few pages helps cement the characters at the heart of this series.

Considering action sequences in “Crowded” #6 in the rhythm of joke telling makes a lot of sense. Like the comedic rhythms of the series, the main action sequence of the issue: Vita and Charlie’s trip through the previously mentioned overwrought mouse trap, is given plenty of setup in the form of a two page spread. The purpose of the spread is to que the reader on what to expect as Charlie and Vita run the gauntlet. With that knowledge the reader is able to easily enjoy the various gags and shortfalls that ensue as they run through it forming those little twists.

The spread also serves as a trip into Trotter’s juvenile, caffeine addled, psyche. Stein, Brandt, and colorist Triona Farrell do a good job creating a stylethat looks like it should’ve been drawn in crayon. They manage to keep things easy enough to follow and still hit all the aesthetic markers of overwrought, Rube Goldberg machine like design sensibilities. The page design itself reads like a bit of a joke on Trotter, a character wrapped in bro gamer masculinity, and his totally cool mouse trap. Triona Farrell fills it with so much light pink and other lighter colors. Absurd as it is, there is a sort of playfulness to the whole thing that runs counter to the red black color scheme in Trotter’s outfit and “S”eriousness it is meant to embody.

Even when there isn’t explicit setup, the art team does a good job of sticking to tried and true notions on how to make an enjoyable fight scene by emphasizing good spatial awareness. When Vita finally goes toe-to-toe with Trotter, the backgrounds drop out and Farrell creates a checkboard pattern via the paneling. This places the emphasis on the combatants bodies and who is in motion in a given panel. The art team setup a semi pattern of orange representing Vita’s moments with yellow often representing Trotter. All of these little decisions slowly add up to a cathartic action sequence and Vita beginning to live up to her namesake.

Comics can be this interesting mesh of compressed narratives told over a decompressed time table, the monthly publishing schedule. Which is why the realization that it’s only been three days in story a bit jarring. However, having that sort of time table maybe in the series long term benefit allowing it to lean into 24 style pacing and other deadline plot mechanics. It certainly gives the series plenty of narrative room to explore as Charlie and Vita hit the road to hide out and get to the bottom of who is behind the crowdfunding campaign and why.

Through all this action and comedy, “Crowded” becomes a pseudo dense read despite being the standard size of 22 narrative pages. Sebela’s script manages to pace things so that scenes have enough room to breathe without actually taking up a lot of space. There is also the visual density created by the art team, they throw a lot at the readers eyes with plenty of jagged slanted panels that often overlap. It creates the sense of visual density without overdoing it. Most pages have 6-7 panels on them which is in line with Kelly Sue Deconnick’s advice on writing comics. This appearance of density made “Crowded” a very satisfying read that tricked me into thinking it was longer than it really was by keeping me engaged.

Final Verdict: 8.0 – “Crowded” #6 has a lot on its plate and finishes it in largely satisfying fashion. It feels like a series that is primed for a long haul instead of flashy Hollywood license.