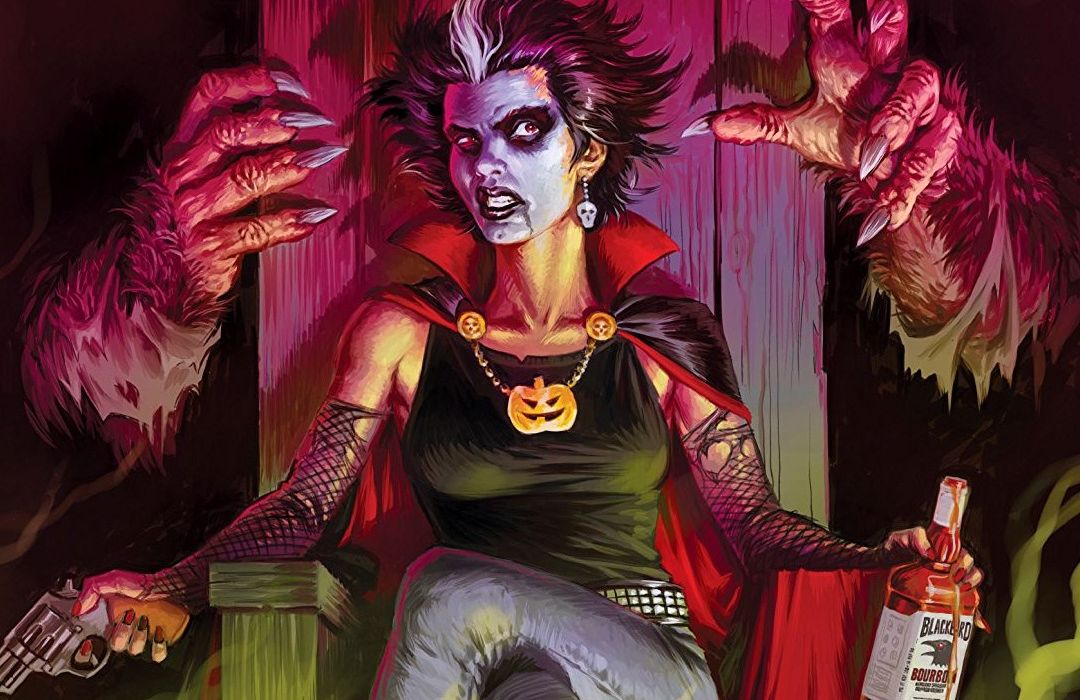 Reporter Jerri Butler is disgraced on air and gets demoted to midnight movie host, replacing her missing predecessor, Count Crowley, but not all horrors are on the screen. Some Spoilers Ahead! 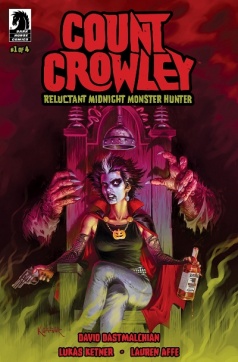 It’s September 1983 and a young woman who looks like a vampire comes bursting from a local t.v. studio. With each panel, we realize this woman is not a vampire, nor is she fleeing in terror. She’s very human, very drunkv and very much in costume, coming off the late shift as a midnight movie host.

In her drunken stupor she comes face to face with a crazed looking man who she assumes is a bum or a mugger. After threatening him with a can of mace, he draws a gun on her and then asks for her to kill him. In the brief moment in which she just looks at him, he falls to the ground and begins to transform into a werewolf; and we’re off.

In just four quick pages, with minimal dialogue, we get an entire story about one bad night, but the greater story at hand is just beginning. We go back to just the day before to see that this young woman is actually Jerri Butler, an aspiring reporter who is just looking for her big break. She currently has her own segment in which she covers smaller stories like local events and happenings, but she isn’t happy. She wants more, and believes she knows how to get it. Unfortunately Jerri is also an alcoholic and she tends to make things worse for herself and everyone around her.

On this bright, late summer day, Jerri is covering a renaissance fair, with a popular guest speaker: Ralph Bonner, the fair’s owner, who is a showman to say the least. As he becomes more and more animated and outspoken, the more Jerri becomes fed up with his high-jacking of her segment. Determined to knock him down a peg or two, she decides to reveal on air that the wine being sold at the fair is cheap box wine and not the premium stuff he claims it to be. As the ordeal comes to its mudslinging climax, Jerri ends up only embarrassing herself and is promptly fired. Which leads us back to the beginning of the issue, Jerri’s first night stepping into the shoes of Count Crowley.

The format for this comic is an interesting one. For being a horror story, the only parts that go for scares of any sort are the beginning and the very end. And this style really calls back to classic horror comics and serials. The route this story takes is one of the best things about it as a whole.

Some of the strongest horror stories out there are the ones that let you live in the world the story is taking place and get inside the everyday, mundane lives of the characters so when the scary and/or supernatural element comes into play, our own head space gets shaken up; and Dastmalchian’s script really goes in that direction. We get to see what a weak person Jerri is and how her faults determine every path her life goes on. It is writing like this that gets us fully invested in what comes next.

Jerri is a mess of a person, but she is easily relatable, even if our lives don’t exactly sync up with hers. She has a list of weaknesses, all of which she seems to not care about overcoming. She has a bloated ego, clearly a front to mask how insecure she is, and her alcoholism which only accentuates all of her faults; leading her to mess up most things in both her personal and professional lives. I have to commend the storytelling in this first issue because while the horror is so minuscule at this point, we are now committed to seeing how everything turns out for Jerri, whether we like her or not. She is the car crash we don’t want to look away from and it is the best way to start this story. We get just a taste of the horror to come and while high in energy and monster goodness, the focus on the relatable real-world element is done very well. We understand every single character that comes into the story and that alone sells it.

Ketner’s drawings style truly suits this book. He has a finely detailed, yet less than realistic look that purposefully makes this book walk the line between silly and scary. It’s a little corny on purpose, and his work really brings that out. It’s very rare to find a comic book artist who truly tells the entire story through their work in a way that would allow for the removal of every bit of dialogue and the reader could still fully understand the entire narrative. Ketner does that here in a great, unexpected way. His use of facial expressions and close-quarter moments with characters really does that job well. His character design is nestled directly in the 80s too. I see a young Adrienne Barbeau as Jerri and Dan O’Herlihy as Ralph Bonner. I can only assume that is what he was going for, if not, we’ll call it a happy accident.

Lauren Affe’s color work is really wonderful as well. Every bit of it is just as good as Ketner’s work and takes the job just as seriously, but the entire art team is succeeded with this book. Every panel feels hand painted and gives the entire book an old school feel that is absolutely needed to make the style work. And Affe hits it out of the park. She understands the exactly how this book should operate in full color, taking into account the perfect use of shading and finer details throughout. It’s a fun

This comic is yet another in a recent sweep of comics trying to recapture some of the magic found in the original “Tales From the Crypt” or “Eerie.” And to be honest, this creative turn is starting to feel a bit tiresome (or maybe that comparison is becoming tiresome as I write these), but it is also leading to some solid little horror books out there. There is something to be said about these one-shots and mini-series that are doing a great job of giving us the spooky moments with just a thin layer of cheese that helps bring about some smiles and that embrace of nostalgia that most of us born in the 70s and 80s are so ready to jump back into. Is the connection or homage to these older comics necessary? No, but if a certain cover or style leads people to pick up something new that deserves a look, then it’s done its job.

Issue one was definitely a different experience than expected, but that mostly works in its favor. Maybe an extra page or two of scary moments could have been used to pad it out, but truthfully the story works very well as is. We get to see exactly what kind of person Jerri is and we get hints to something traumatic from her past, which probably helped lead her to be how she is now. Well crafted writing and retro-vibing art cement “Count Crowley: Reluctant Midnight Monster Hunter” #1 as a really enjoyable first issue with a foot in more than one era of horror comics.