All the conspiracy theories you’ve ever heard are a lie. A smokescreen to protect a world behind the world. The secret truth is something far, far weirder. 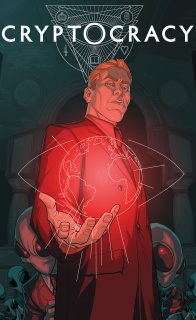 For time beyond memory, the Nine Families watched from the shadows, believing themselves shepherds and manipulating whole societies as they saw fit. Nothing happened that they didn’t observe or control. Outsiders knew naught of the Families, much less threatened them. Until now.

Conspiracy theories fascinate me. From the believable to the bizarre, there’s something about people’s want to find an order in the chaos of life that really resonates with me. But the best thing about conspiracy theories is how far they’re able to bend that believably before it breaks. Jensen and Wood’s first issue perfectly captures the fantastically far out vibe of the best conspiracies, splicing together science, magic, cryptids, politics, and ancient aristocracy, to create a book that bombards you with so much information (and misinformation) from the very first page that, if you tried to explain it to anyone you’d end up sounding like a rambling madman.

So, without further ado, I’ll try and do just that:

On the surface, the overall concept seems simple enough. There are nine ancient Houses who live in secret, controlling everything from politics to pop-culture, in an effort to keep the world spinning just the way they want it to. They influence the world at large through an intricate series of untraceable connections and seemingly random events, and maintain an uneasy truce between one another, all while secretly trying to tear the other families apart. Issue #1 opens with one of the aforementioned ‘random’ events going wrong, and killing a few hundred people. We’re introduced to Grahame, a mysterious fixer working for House Mars, as he attempts to sweep this disaster under the rug and deal with the threat of a potential coup from a neighbouring house as Mars’ Elder breathes his last.

That’s when things start to get complicated, as we take a breathless tour through the world of the Cryptocracy that encompasses aliens, urban legends, political prisoners, and spoiled little rich kids, all seen through Grahame’s seasoned eyes. Jensen’s choice to fly through the first issue with a protagonist as seasoned as this means that he’s able to touch on so much of the madness that promises to make this book truly interesting, without having to get bogged down in anything too specific just yet. The world seems as well thought out as it is weird, full of internal references and nods to a pre-existing structure that allows for exposition that doesn’t slow the flow of the narrative. While I found myself flicking back to check the opening Key that Jensen provides a few times to check on some words or concepts, it added to, rather than detracted from, my enjoyment of this issue.

Woods is given a lot to work with here, and it’s clear he really enjoys the ridiculousness of “Cryptocracy”‘s scenario. Woods manages to balance opulence and tradition with bleeding edge technology in a way that seems very natural, providing an aesthetic that would make the Hellfire Club jealous. the vast and varied world of the Cryptocracy is really only grazed in this issue, but Woods packs his panels with so many weird and wonderful extras and supporting characters that you can’t help but picture the depth of this newly imagined world. The way that Woods’ character creation translates to the page is wonderful, blending elements of psuedo-science and comic-book nonsense to build a set of characters whose variety remind me a lot of Fiona Staples’ work on “Saga”.

There’s a lot of text in this first issue, understandably as there’s a heck of a lot of worldbuilding being done, and Piekos handles the lettering masterfully, adding nuance and emphasis to Grahame’s verbose statements so that, even at their longest, they’re rarely boring. As with the character creation, there’s an inventiveness and playfulness with the letters that is typified during an exchange between Grahame, his right hand man Jason (who is, of course, an anthropomorphic Bear) and a besuited Alien named Gary. The aliens, Roswell refugees who found jobs working for the Houses after their incident, speak in what I initially assumed was a Wing-Dings-like gibberish. But, on closer inspection, it’s clear Piekos has designed a specific, barely legible, font for their extra-terrestrial patois.

This is a bold and ballsy book, that sets up plot points so numerous that it’s difficult to keep track of them all on first reading. There are definite bits and pieces that could have been slightly more polished, as well as some generic expositional conversations that you find in almost all first issues, but I really admire the ambition of Jensen and Woods’ idea. Given the current political and social unrest both in Britain and the U.S right now, there’s never been a better time to explore the dark and shady world behind the politics and social engineering that some people are convinced plague our nations. Jensen and Woods’ melodramatic take on the shadowy ‘Illuminati’ reads like the best conspiracy theories out there. It’s all-encompassing, meticulously mapped out and, for all the crazy they’ve thrown in there, it’s just believable enough to make you wonder what we’re really not being told.

Final Verdict: 8.4 – Superlative Sci-fi that uses its medium perfectly. This is the kind of ridiculousness that comic books are made for.