Charles Soule and Ryan Browne on the surface – except for the silent ‘e’ at the ends of their surnames – don’t have a ton in common. Soule, a lawyer and writer of serious, dense comics and Browne, a cartoonist that pushes comics into absurd and surrealist places don’t jump out as a potentially simpatico pairing. But “Curse Words” shows you that appearances can be deceiving, and that this creative team is a match made in wizard heaven. Keep reading for our spoiler-free review. 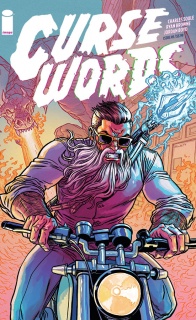 “THE DEVIL’S DEVIL,” Part One The new ongoing series from CHARLES SOULE (Daredevil, Death of Wolverine, Star Wars) and RYAN BROWNE (GOD HATES ASTRONAUTS) is COMING FOR YOU! A wizard has appeared in New York City, and he’s casting wonderful spells, getting famous, getting rich-it’s great! But it’s not. This wizard has everyone fooled. He is actually an EVIL WIZARD, and EVIL THINGS are on the way. CURSE WORDS is a gonzo modern fantasy, full of darkness, light…and MAGIC.

This feels like a Ryan Browne comic, from the moment you look at the cover. Browne’s style and touch are all over this issue. In fact, in many ways, this checks all of the Browne artistic boxes within the first five pages: horse? Check. Onomatopoeic sound effects? Check. Mystical apparitions and/or ghosts? Yup. Animals doing non-animal stuff? Uh huh. Some heretofore unseen act of violence? Yarp.

In fact, Browne is such a strong creative voice that it can be a little tough to spot exactly where Soule fits into this mix. This is such a change from the overwhelming majority of comics released in the past fifteen or twenty years. Sure, an artist always defines the visuals of their books, but Browne’s work is so idiosyncratic and specific that it is hard to imagine that anyone but Browne could write this.

If I had to venture a guess as to what Soule brought to the project from a practical standpoint, I would guess that he brought a certain clarity and focus to the project. Compared to, say, “God Hates Astronauts,” “Curse Words” feels quite refined. The main story is less obscured by minutia and side-stories, and is told in a reasonably straightforward way. That isn’t to say that “God Hates Astronauts” suffers for its scope because, frankly, it doesn’t. But “Curse Words” feels more like a conventional comic than anything Browne has written and illustrated in the past.

But to call this a conventional comic is a stretch. It is a story about an evil wizard that comes to Earth to conquer it, but falls in love with it. Soule and Browne do a wonderful job showing Wizord’s heart melting as his time on Earth continues. There is just enough obfuscation to hide whether or not his love of Earth is due to his genuine care for the planet’s inhabitants, or the allure of being the most powerful creature on it. He seems genuine, but it is tough to tell with wizards, isn’t it?

What is so striking about the book from its first issue is just how this feels like an inversion of what we have been seeing often in superhero comics: this isn’t a hero going dark, this is a villain getting better. There is an air of optimism throughout the book that feels truly different and exciting. Even if Wizord’s intentions may not be totally pure, he is making the world a better place. It is shocking how infrequently that is the goal of a superhero comic these days – everyone is reactive instead of proactive.

The book doesn’t just rest on a concept that can make you smile: it also works hard to make you laugh. The #teammargarget hashtag shows up throughout, giving his Koala familiar some internet love, and it gets funnier every time. There is the ultimate dad joke given a French twist that is just perfect, and on just about every page is something – either a visual gag or a line of dialogue, that is laugh out loud funny. Comics used to be called ‘funny books,’ but it isn’t often that they are actually funny, let alone this funny.

On a truly shitty day, this comic was a source of genuine joy. I feel better after reading it, and that is just about the best gift a comic could have given me today. It would be a stretch to say that I took inspiration from the story of an evil wizard who is changing his way, but it made the world a little less horrible for a few minutes. But Browne’s art, as expressive and fun as any in comics, and Soule’s words, clever and engaging, for a few minutes, made me forget the events of noon Eastern.

Final Verdict: 8.8 – Even though Wizord can promise no curse, wars, or loves, this book can promise a thoroughly enjoyable experience.