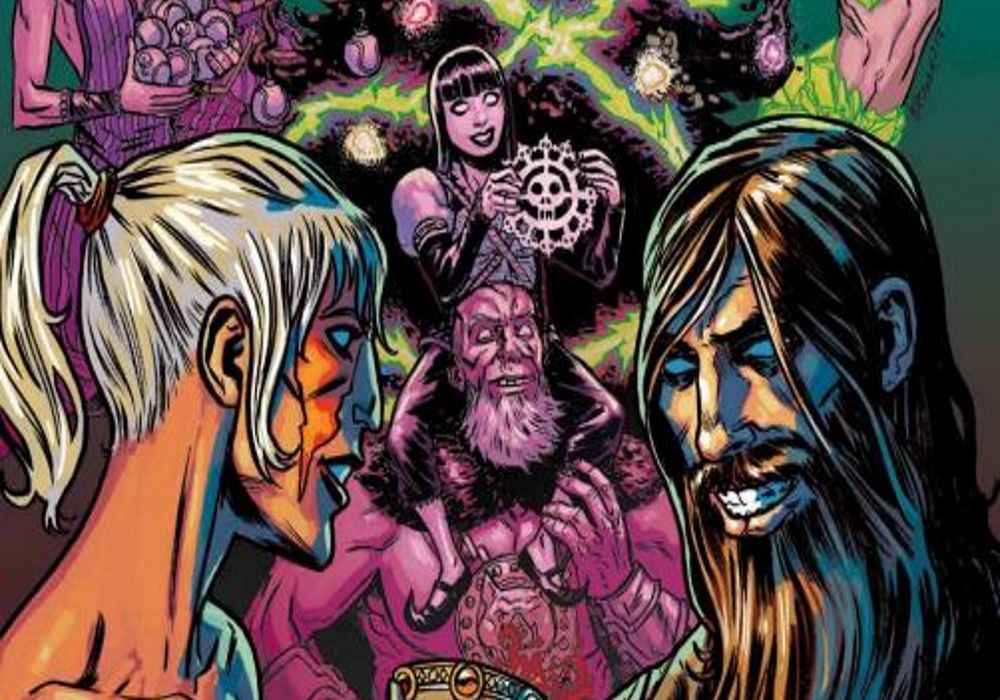 “Curse Words” has been one of the loveliest surprises of the year. It’s full of wit and unique style. It introduces us to a pantheon of memorable characters, and is full of mystery and mythology. A holiday special seems like just the thing to celebrate everything that makes this comic great. 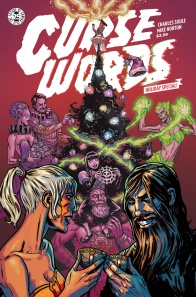 ‘Tis the season…but not just on Earth! The Hole World has holidays too, and in this special CURSE WORDS event, you’ll see how Wizord, Margaret, and their pals celebrate the season. With looks into the cast’s pasts and visits from dearly departed wizard-y friends (hey there, Cornwall…), this one’s not to be missed.

The “Curse Words Holiday Special” takes place entirely in the Hole World, meaning it is freaky as all get out. It tells the story of the dread lord Sizzajee, and how he celebrates the winter holidays with his nine magical disciples. Just because they live in an eldritch apocalyptic hellscape, doesn’t mean there’s no Christmas. It’s just a terrible bastardization of everything Christmas stands for.

The main feature of the Hole World holiday celebration is a ritual called the Meat Meet, in which the nine mages must track a hideous beast to earn the favor of their patron, and to have a main course at the holiday meal. It ends up being an excuse to feature most of the characters in a prominent way. As a prequel, it’s also a chance to spend time with some characters who are indisposed and/or totally murdered in the series proper.

This is an issue for the fans, which makes parts of it oddly stilted. Everyone is constantly saying each others names. There are a lot of characters, but fans of the series would probably know who Ruby Stitch and Botchko are. The information could have been easily delivered in a single splash page, but instead characters tell each other things that they already should know. The Toreen Twins keep reminding the reader that they are brother and sister. The two of them are pretty weird, so they have an excuse, but it seems like everyone keeps bringing it up in conversation for the benefit of the reader. Maybe it’s just an aspect of the Langue Mystique that doesn’t translate well.

One aspect of the series proper that makes the transition nicely are the strange, jagged panels. “Curse Words” features some of the most memorable panels in all of comics, using diamonds when the book could be using squares, and using strange gemstone-shapes for emphasis. There are some truly memorable panel shapes here, and you’d have to be an expert in geometry to identify them.

The art style is also very faithful to the main series. This is notable because regular artist Ryan Browne, who brings such a singular voice to the book, is credited with colors, but the main illustrating duties belong to Mike Norton, most famous for the horror comic “Revival.” It’s such a great impression that if you put any panel of this issue next to any one drawn exclusively by Browne, you’d be pretty hard pressed to tell the difference.

Which isn’t to say that there are no differences. What Browne brings to the table isn’t just artwork, but an irrepressible sense of imagination. That doesn’t even do it justice. Ryan Browne is a madman, and his insanity is the very foundation “Curse Words” rests upon. No offense to Norton, who I’m a big fan of, but his usually naturalistic style can’t match the bombastic nuttiness that makes Browne who he is. The most memorable image is of Sizzajee, who simply has the best ugly sweater on, covered in trees, skulls, and bombs, cornerstones of any holiday.

There’s nothing in this issue that the one with the cookout didn’t already cover, but if you love “Curse Words” more time spend in the Hole World is worth it. The exchanging of gifts at the end of the issue is fun, but happens much too fast. If the main criticism of a book is that you wanted more of it though, how bad can it really be?

The “Curse Words Holiday Special” ends up feeling less like a cover album, and more like a bonus track. You certainly don’t need to read it to get a better feel for the story (unless you really need to see the minutia of how Wizord and Ruby Stitch first hooked up), and it doesn’t ever reach the heights of main numbered series, but that’s why it comes at the end. It’s a fun post script, looking back at a year of excellent comics, and taking a self-indulgent moment to do a victory lap. When dealing with such an essential series, a little self indulgence is in order, and who knows? Maybe a hunt for a disgusting deformed meat beast is exactly what your 2017 holidays were missing.

Final Verdict: 8.0 – A fun one shot that will warm the freaky little hearts of the series fans.