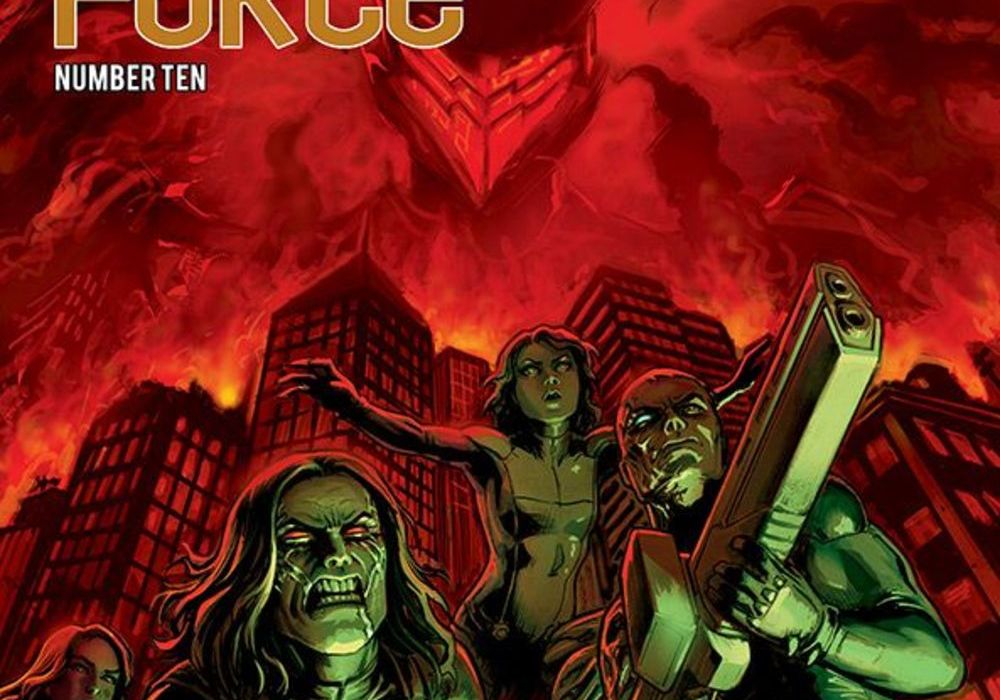 In this issue, they throw a Rage Party. 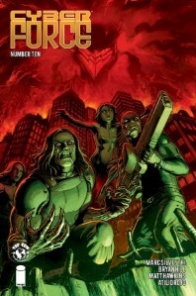 Written by Bryan Hill and Matt Hawkins
Art by Atilio Rojo
Lettered by Troy Peteri
Morgan Stryker convinces Ripclaw to join Cyber Force, but the organization that created him wants Ripclaw dead. Stryker makes a choice that will turn Cyber Force into fugitives or murderers — or something much, much worse.

After several issues of action and violence, the conscripted members of what would be Cyber Force inhale a deep breath and take in the aftermath for the tenth issue. As Cyber Data brings Ripclaw back into the fold the team gets another new member who is asking more tough questions. With the cast taking stock of recent events, the creative team uses this issue as a chance to reset and restate some of the core themes of the series. This rest bit also gives us a chance to see how artist Atilio Rojo handles things in a less extreme setting.

While this series has its fair share of violence and viscera, Rojo’s character work, in particular the face, isn’t nearly as expressive or melodramatic. He channels and expresses the extremity of “Cyber Force” primarily through macro page designs. That expression however can be undercut or denied through the stoic quality of his figure work, excluding Ripclaw who we’ll get to in a minute. This systematic denial of overt expression is seen early on as Morgan Stryker is debriefed by the voice on the other line – all indications are that is “Lilith” from a couple of issues earlier and their binary code translates to ‘K.’ Stryker is attentive and can’t seem to help playing the role of soldier, despite his increasing unease with command decisions. He questions Cyber Data’s one sided view of loyalty, a more appropriate term for it would be fealty. The voice compares themselves with the divine and the dueling expressions found in both Old and New Testaments. The voices evocation of divinity may be hubristic, but they are certainly powerful. There is something imperial in the way Rojo presents the subdued Ripclaw, fully exposed and subject to all the scientists look, and the smallness of Stryker compared to the large screen he is talking at.

Eventually Stryker boils over, he’s never been one for Gods, and gestures about while wondering what they plan to do with Ripclaw. Normally such a moment would be a big panel and shown from the front so you got to see the magnitude of expression. Rojo denies this, showing it from a withdrawn perspective and giving readers only the back of Styker to look at. Sure we see his arm flailing about, but you don’t get to see his face. The only bit of excessive expression we get in this sequence is with a small inserted panel of a office chair crushed under his metal palm. Something about Stryker’s character design, or the way Rojo draws him, renders him not very expressive. As he arrives late to what he dubs the “rage party,” Rojo draws him with the ever present steely eyed Clint Eastwood look. Despite the humorous lingo, the art plays everything incredibly straight.

The character design of Ripclaw appears to be a more natural fit of melodramatic moments of expression. Their design gives them an overall gaunt face, that is accentuated by his quartet of facial tattoos. The way his tattoos either meld together or extend the distance from his cheeks to his chin help to show his emotional state waffling between berserker rage and murder face. This ever present state of anger also makes him a primary candidate for Rojo to inject a sense of extremity through page design. As Ripclaw tries to escape and burn the Cyber Data facility to the ground, Rojo draws him in constant motion. His body is always lunging, or sort of galloping the way The Beast from Glass did. This means lots of wide horizontal panels that are sort of laid out in a zig zag orientation which are flanked by Troy Petri’s lettering and give the page a sense of manic energy. The decision to connect Stryker and Ripclaw across space through opposing panels, as the former calls out to the rampaging cyborg is a highly effective moment. The way Rojo bathes everything in red light as the facility goes on alert gives things a surprising depth. Artist D’Israel does something similar in “Scarlet Traces: Home Front” strip currently being published in “2000 A.D.”

Atilio Rojo has developed a complex visual scheme playing into or against the melodramatic roots of “Cyber Force.” Such a system makes sense considering this iteration of “Cyber Force” is supposed to be reboot of the franchise and update for everything, the kind of hyper everything doesn’t really play these days. At the same time it helps to maneuver around what I think is a lack of expressiveness and dead eyed quality in Rojo’s figure work. I don’t mean this to read as “Rojo cannot draw faces.” Overall I think they look fine, but there is this dead eye quality, by which I mean a singular or vacant expression in their face and eyes. In “Cyber Force” #10 this comes through as Velocity tries to pick up Dom’s spirit as she is still getting used to and dealing with dysmorphic feelings around her new cybernetic body. Textually the scene is a nice restatement of the series overall investigation of humanity and what that constitutes. The figure work and facial designs just read a little stiff and lifeless.

The lack of depth in the eyes appears to be how he applies colors. The color palette is solid but he layers over everything with various shades to create a volumetric appearance with minimal line work. Which is why characters like Velocity, Dom, and Aphrodite, can appear flat and vacant. The character models for Stryker and Ripclaw feature more linework that helps give their face texture and greater sense of volume and expressiveness. The sense of flatness comes from a diversion from previous work like “Eden’s Fall,” where Rojo used copious amounts of white highlights. The use of highlights didn’t give anything a sense of naturalism but it helped make everything pop in a cartooned way. “Cyber Force” doesn’t have many of those white highlights so even though his figure work is fundamentally similar it doesn’t read nearly as well due to flat lighting. Overall Atilio Rojo’s work on “Cyber Force” is fine and helps give the book a singular aesthetic that reworks and harkens back to the sensibilities of Marc Silvestri, Scott Williams, and Joe Chiodo.

Final Verdict: 7.0 – “Cyber Force” #10 is a issue that lets the series catch its breath and wouldn’t be a bad spot to jump on as our heroes become increasingly dissatisfied with their situation and Cyber Data’s position of power.