Licensed stories have a long and proud history in the comic book industry, and comics based around well known intellectual properties such as Star Wars, Alien, Predator, Transformers, and ROM Space Knight have gone on to be well loved by the fans and integral parts of the broader lore of their stories.

I bring this up because, over the last couple of years, Dark Horse Comics has been working with video game developer CD Projekt Red on creating licensed comics based around two of their biggest games: the Witcher and Cyberpunk 2077.

The books have garnered a reputation for being solid and enjoyable to read, let’s see if today’s offering of “Cyberpunk 2077: Blackout” #1 can live up to the standard. 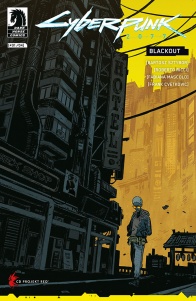 It hurts. Night City hurts. The suffering runs deep and the deeper one falls, the longer the self-prescribed dreams play. Fortune, hope, love -all made possible by DMS technology. But not everyone desires a happy ending. A braindance repairman discovers the answer to pain . . . comes in a blackout.

Arturo is a corporate programmer living in the eponymous Night City and working for a media company called Diverse Media Systems, or DMS. It’s a company that sells a product called a brain dance, which is a virtual reality simulation of other people’s memories that you can experience for the right price. While it’s a job that pays well, Arturo is in the uncomfortably relatable position of working a job that he hates because he owes a bunch of money to a massive and uncaring corporation that is knowingly killing its customers through fantasy. It’s not like Arturo doesn’t know this, in fact he wants to actually help people, it’s just that the corporate bosses want to maintain the normal–and profitable–status quo. This has left Arturo incredibly depressed and borderline suicidal, and it’s only a matter of time before he snaps and decides to use his skills to take matters into his own hands and fight the powers that be.

“Cyberpunk 2077: Blackout” #1 is written by Polish writer Bartosz Sztybor, who has quite a few credits working on various Witcher and Cyberpunk 2077 comics for Dark Horse. Sztybor is an excellent comic book writer and strikes a great balance between showing how miserable Arturo is while showing the reader a system and technology that is slowly killing its customers. Arturo is a man in a unique position to see just how miserable everyone in Night City is, whether they are rich or poor, and he sees how uncaring the people in power really are and how they are eager to keep things the way they are. Probably the most compelling moment is when Arturo has to watch the tech he maintains be used to torture prisoners with the memories of their crimes, even though he knows it can be used to help rehabilitate them. It’s a great script that presents a very compelling and relatable character that wants to change and fix a hopeless and depressing world. All he has to do is bend a few rules to do it.

If “Cyberpunk 2077: Blackout” #1 has any problems with the script, it’s with the words themselves. This is an incredibly petty critique of an excellent comic: but the flow and rhythm of the words can feel a bit strange and awkward at times. It makes sense considering that English isn’t Sztybor’s first language, and CD Projekt Red has done an excellent job translating the book, but there are one or two captions and lines of dialogue that might feel a bit off if you read them out loud. Still, this is a small issue in an ocean of excellence and shouldn’t prevent you from enjoying this book and the universe.

Because Sztybor’s script focuses on the emotional and mental journey of the main character of “Cyberpunk 2077: Blackout” #1, it’s up to penciler Roberto Ricci and colorist Fabiana Mascolo to make the broader world come to life, and once again it succeeds brilliantly. Ricci uses a minimalist approach when drawing character’s faces and combines it with highly detailed clothing and tech, along with a great use of old school benday dots, to create the high tech grime of Night City. It’s a place that exemplifies the idea that the cyberpunk genre is made up of “high tech and low morals” and really makes Night City feel like it’s a place that people actually live in. That high tech misery is further enhanced by Fabiana Mascolo’s fantastic use of a deep, rich, and monochrome color palette. Mascolo commits to an interesting trend in modern comic book coloring, where each panel is dominated by a singular color scheme that dominates the entire page. It allows the book to quickly show the reader what to focus on, and allows the creative team to quickly bundle groups of panels together in order to inform the narrative. When these colors combine with the art, it all comes together to create a neon drenched fever dream that you know is an awful place to live in, but is weirdly pretty to look at.

“Cyberpunk 2077: Blackout” #1 is an expertly crafted comic with a great protagonist, an interesting and relatable story, and absolutely gorgeous artwork that promises to make this tale out of Night City one to remember.

Final Verdict: 9.1- This is a well thought out, extremely relatable, and incredibly engaging slice of life story out of Night City that reads great and looks even better.