One of the final founding members of The Justice League gets his own solo entry into the Rebirth era. But does Cyborg survive the transition or does he need a full system reboot? 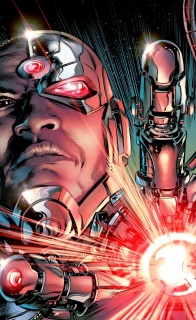 Victor Stone was once a star athlete and brilliant student with a bright future. But after a tragic accident destroyed over half of his body, Victor was kept alive by merging flesh with advanced technology. Today he is the Justice League co-founder called Cyborg. But is the young hero a man…or a machine that merely believes it’s a man?

In the wake of Batman V. Superman, an unsuspecting public were exposed to fleeting footage of some of the founding members of the Justice League. Jason Momoa’s bearded, burly take on Aquaman might have finally got people to stop laughing about the least respected member of the League, and Ezra Miller’s Rick and Morty loving millenial twist on The Flash seems to promise a more accessible version of the scarlet speedster. On the surface of things, Ray Fisher’s Cyborg seems to have stayed the closest to the source material of all the cinematic updates, but with “Rebirth” well and truly underway we finally get a chance to see whether the updated version of this classic character will trend towards the cinematic or stick with the source material.

Cyborg, ex-star athlete turned modern Frankenstein’s experiment turned Justice League alum, opens this issue assaulted by an unknown cybernetic assailant. As the massive monster, self-styled as ‘Malware’, attempts to break into S.T.A.R. Labs, Cyborg is the only thing who can stand in it’s way. But Malware’s physical advantage brings it deep into the heart of S.T.A.R Labs, to a place to secret that even Cyborg wasn’t aware of it.

Semper’s script is a fairly straightforward first issue, featuring a fairly heavy amount of exposition throughout. While some of the Victor/Silas Stone stuff might feel a little familiar for Cyborg aficionados, Semper’s breakneck pacing and Pelletier’s playful mirroring art during time-jumps means that it rarely feels boring. And for a member of the Justice League whos origin story is far less well known than the caped crusader or the big blue boyscout, it makes sense to have a refresher course for any new fans. Semper offers up some updates to the Cyborg mythos, most notably the inclusion of a Motherbox as part of Victor’s transformation, and the death of Victor’s mother occuring earlier, to further drive a wedge between him and his father. But the changes are largely surface-level, and the core tenets of the character – the debate about humanity versus soulless machinary, the absentee father – remain thoroughly intact.

On the surface of things, it sounds like Semper and Pelletier have crafted a pretty talk-heavy issue. But there’s a mondo helping of action on offer in “Cyborg: Rebirth” #1.  Indeed, this issue is pretty action-packed, opening with a massive action sequence outside of the labs that doesn’t really let up throughout the issue. Pelletier has a great eye for action, and there are some fantastic examples of out-of-the-box panelling that help this super-sized showdown from feeling formulaic or dragging.

Semper manages to cram a lot of conversation between both Cyborg and Malware, and Cyborg and his paternal support team, into the brawl, and it’s great to see how charismatic this variation of Victor is. Even as Malware is handing him his shiny metal butt, Cyborg seems in control of the situation, and that confidence chimes nicely with his character as a hero who’s been in the business for 5 years and has seen more than his fair share of seemingly crazy creatures. Victor’s confidence balances well against the overarching narrator that keeps pace throughout this issue. A cold, robotic analysis of Cyborg’s abilities (that also manages to front-load a reasonable amount of his backstory) Malware’s keeper and the shrouded antagonist for Semper’s first arc provides the backbone for issue #1. Semper shines a light on a range of cybernetic characters throughout the DC universe, suggesting a storyline that might have far-reaching ramifications for robots far and wide.

Pelletier shows a real flair for the bombastic, and his art definitely hints at a sense of scale that I’m excited to see explored in later issues. There’s a great splash panel that shows the Justice League in all their para-demon punishing glory, and added to the almost constant barrage of well-framed action in this issue it definitely lays the groundwork for one of the most straight-up action books of the Rebirth era so far.

While there’s not that much that hasn’t been seen before on show in “Cyborg: Rebirth” #1, Semper and Pelletier have put together a really engaging jumping on point of new fans of the franchise, and there’s a lot of scope for a large, and slightly ludicrous cybernetic romp that seems to have its foot on the gas from the very first page.

Final Verdict: 7.2 – Victor Stone’s chrome plated conflict gets a shiny new upgrade, and I’m really excited to see what else it has to offer.