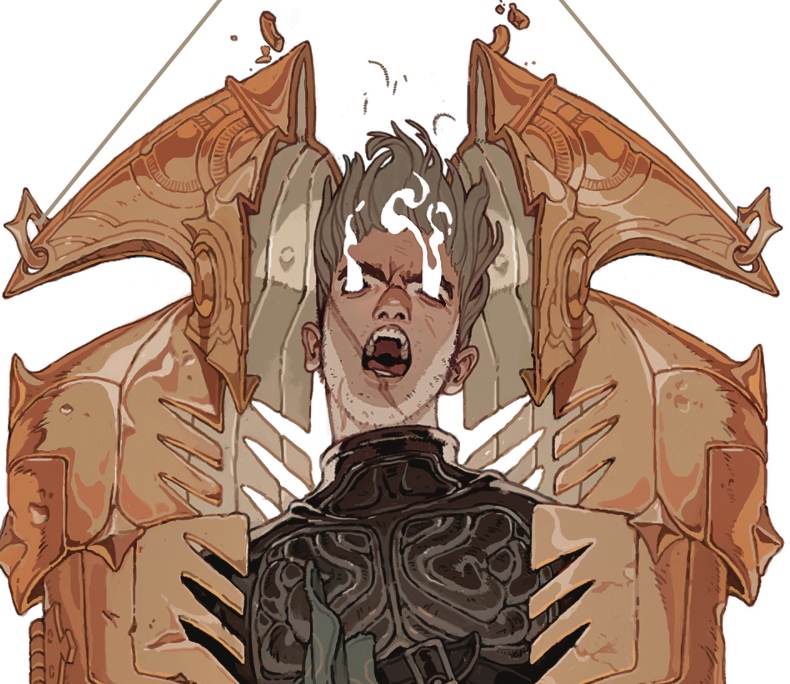 “Dragon Age: Blue Wraith” #2 gets away from the massive plot dump of the first issue, but struggles to balance a huge cast and dense story. Warning: spoilers ahead. 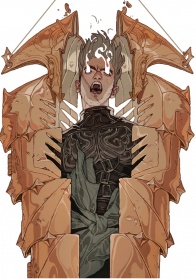 Cover by Sachin Teng
Written by Nunzio DeFilippis & Christina Weir
Illustrated by Fernando Heinz Furukawa
Colored by Michael Atiyeh
Lettered by Nate Piekos The Inquisition has sent some of its best agents on a mission of dire importance-steal back a powerful Tevinter relic before it can be used to unleash chaos across the land. If they are lucky, they can recruit Fenris – the Blue Wraith – whose vendetta against his former master has put him on a similar path.

“Dragon Age: Blue Wraith” #2 continues the tale of Francesca Invidus as she tracks her father and runs smack into Fenris, the infamous Blue Wraith and hero of Kirkwall. We continue to see some familiar faces from previous “Dragon Age” comics as the unlikely team of mage and mage-hunter struggle to find common ground and track down Francesca’s father and the ominous casket that gave Fenris his powers.

The plot’s goals and mechanisms are simple enough: find a weapon, rescue a family member, snipe at each other along the way and find common understanding in the end. DeFilippis and Weir stack the story with a boatload of characters that make untangling these goals more than a little daunting, however, and clarity in plot and mood are elusive. Part of this is down to the source material, as “Dragon Age” lore is famously sophisticated, and the need to onboard an audience means any trans-media title starts from a bit of a deficit.

An audience unfamiliar with the previous titles, “Dragon Age: Knight Errant” and “Dragon Age: Deception,” will be lost as they try to muddle their way through this mini, and those in the know might have some problems as well. “Dragon Age: Blue Wraith” features one too many flashbacks and point of view shifts to help us along. We also came to see more of Fenris, frankly, and he’s taking a bit of a backseat to the narrative intricacies and quick scaffolding needed to make Francesca front and center. Still, there are glimpses of good storytelling here. DeFilippis and Weir introduce Shirallas, the soon-to-be-villainous Dalish elf whose desire for Fenris’s lyrium powers leads him to the current owner of the casket. The banter between Francesca and Fenris is interesting, and Fenris maintains the staunch broodiness and rigid morality that made him a fan favorite.

Furukawa has the unenviable job of cramming multiple characters into small panels, and the execution is pretty good. Furukawa’s style is angular with manga-esque facial details and stylized action, and the bubbliness adds some interest and levity to amplify that peculiar blend of schlock and high fantasy that makes “Dragon Age” special. It mostly works, save a few “Dragon Ball”-esque reaction panels of Fenris that tip too far in the direction of comedy to make the otherwise deadly serious action sequences fly. Furukawa gives Francesca’s magic a lot of flair as well, and Fenris’s sleek design is in keeping with his incredibly anime boy-toy self from the game. He’s a little beefier, a little older and no less stubborn, much to our communal delight. The final page features some cool lyrium action, too.

Some of the cartoonish quality in the book comes from Atiyeh’s color palette choices. Atiyeh incorporates lots of color for clothing to keep characters distinct, and adds a lot of rainbow touches to Francesca’s magic that bring some joy to the page. There’s not a lot of room for gradients or textures here, given Furukawa’s fine line and small panels, so the visuals veer toward that clean, alien quality that’s so common with digital comics nowadays. Still, Atiyeh pays close attention to light sources – and there are plenty to reckon with, given the heavily armored characters at play here. There are also a few backgrounds with some nice, impressionistic forestscapes, and the detail added to Francesca’s hair make it a focal point worth following.

Piekos’s talents are well-known, but of particular note in “Dragon Age: Blue Wraith” are the playful off-panel tails that emanate from doorways and, in one case, a small slit window in an exterior door. Those kinds of detail are easy enough to miss when done well – and too hard to ignore when they’re not – but they add flavor and support the overall tone of the book. Piekos picks a nice square font and adds a subtle stroke on the balloons to complement Furukawa’s line, and there’s minimal padding at play. There aren’t too many sound effects in this book, but that’s a wise choice given the amount of speakers, the volume of dialogue and the team’s predilection for smaller panels.

Overall, “Dragon Age: Blue Wraith” #2 gives us a bit of a breather but shoves the plot along a little too quickly to suit. To be fair, three issues is an almost obscene length to try and tell a story in this universe, and it’s clear the team’s trying to help us along as best they can. Still, the story could do with some trimming, a bit more focus on the lead, and a few less characters to open up the story and let the art breathe. Our adventurers have a new lyrium villain to defeat, a couple backseat baddies to vanquish and a disagreeable father to find, and one issue might not be enough to contain all that action.

Final Verdict: 6.5 – “Dragon Age: Blue Wraith” #2 slows down a bit to give us some more time with Fenris, but it’s not enough of a balm after the hectic pace of issue #1.