DC’s New Age of Heroes begins with “Damage,” a story allegedly spinning off from “Metal” about this big Gorilla/Hulk/Doomsday mashup we have presented on the cover. So is it worth investing the latest addition to DC’s pantheon? 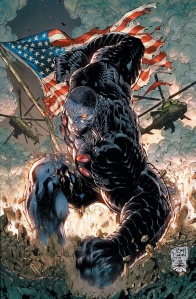 Tasked as the government’s own living, breathing, ticking time bomb, Ethan retains no control when the monster takes over. Cheaper than a nuclear warhead and twice as effective, Ethan fights to rein in the damage he unleashes when the beast inside him springs free for one hour a day. With everyone around him in danger, Ethan struggles to contain the DAMAGE he inflicts on the DC Universe.

What’s clear about “Damage” to me so far is that it is a total Hollywood power fantasy. The premise is pretty basic in this regard, with Damage himself being a hulk-like uncontrollable transformation commissioned by the government to effectively be a cheaper and better nuke. What occurs in issue is sort of like the start-at-act-two method of storytelling: Ethan Avery has already undergone the Nuke transformation, we’re introduced to him just as he’s lost control and proceeds to rain holy hell down on the city he falls into. Venditti does a good job at establishing his mysterious origins with this – through Damage’s engagements with other characters, like Major Liggett, we get bites of information as to what Damage is and what drives him. It’s solid drip-feeding storytelling that’s bound to keep invested readers hooked for the upcoming issues.

It’s just unfortunate that outside of these little storytelling gems, everything else is a little shallow and by-the-book. The story plays out like literally every overdone “Hulk” story ever made, and even gave me some unwanted flashbacks to the 2003 movie. It’s fun to a certain extent, that’s for sure, since Venditti knows exactly how to milk the script to get the most out of Tony S. Daniel’s pencils. The action consists of Damage falling from a plane, Damage wrestling with his mech-armoured foe, and good old throwing cars and debris around, which Venditti makes sure gets full page real estate. If you try to go deeper, however, you’ll find the same old tropes – the mech-armoured foe is a power-hungry comrade who wanted the Damage transformation ‘more’, the government somehow didn’t anticipate Damage going crazy and rampaging on his first outing, and having Ethan, Damage’s host, be something of a pacifist. I did find it quite interesting that Ethan seems to have a second pacifist voice in his head while he’s Damage, which could make for some interesting storytelling decisions down the line.

I should mention the pacing of this story. Without a doubt, Venditti has things kicked into high gear. The fight scenes are quick and decompressed, with each scene featuring Damage in combat, Damage rampaging through the city, or Damage moping. Unfortunately, regardless of how fast and intensely it happens, not a lot happens in this issue. Venditti suffers from some decompressed storytelling issue here – in that maybe 90% of the issue could’ve happened in about a third of the page count, had some of the fat been trimmed and splash pages abused less. It makes this debut issue feel rather insubstantial and almost confusing where it leaves you, when it feels like there could’ve been more narrative or worldbuilding.

But let’s be honest here. The real reason you’re buying this book is because you’re all about that big screen action artwork. Make no mistake, this is very Tony S. Daniel in his element. Think “The Death Of Superman”, because you’re going to get a lot of shots of monsters brawling around a destroyed cityscape. And the splash pages. At this point, since there’s such an effort to squash as many of them into the issue as possible, we should highlight the best of them. The second and third pages are a double-pager, with Damage falling from a helicopter with chains and torn clothing flying from him as he snarls like the best of them. It really sets the tone for the issue, and has Daniel doing what he does best – delivering 90’s style overdone anatomy but with the sleek and realistic finish of a movie still. From here, Daniel has Damage clash with Major Liggett, the aforementioned mech-armoured foe, in some tense Kirby-style beatdowns. It’s here where Daniel sticks out from the crowd: his figure work is dynamic and eye-popping, and his action infuses the best of modern and classic comic art. However, there’s one odd-looking shot of Damage face-on in the fourth page which looks uncomfortable and has a face that seems to channel Marvel’s Red Skull.

On top of that, we have Danny Miki inking Daniel’s pencils to create some sweet, thick eye candy. I believe that it’s due to Miki that Damage feels truly monstrous. On that first splash page, Miki highlights Damage’s with staggered, expressive strokes, conveying the chaotic nature of the beast being rendered, and works over the shell-like armour with nice thick dark lines that just look alien in origin. Miki’s inking works well in a storytelling aspect, especially in the Liggett/Damage clashes. Often Miki will opt to ink heavier on Damage than Liggett, subtly suggesting that Damage is the foe and that Liggett is the one in the right. It conveys well how the public perceive the fight, and how Damage is supposed to be a tragic character. Then there’s the smaller scenes which Miki brings to life well – like in a sequence near the ending showing the ‘Colonel’ clenching his hand. Miki renders it realistically with less hatchy linework and a subtle change where the hand muscles change from panel to panel. It’s a credit to Daniel, too, but looks distinctly expressive in a way only Miki could render.

Tomeu Morey brings colors to the story, and like much of the issue, it’s about what you’d expect. Not that Morey does a bad job by any means, it’s just all so… serviceable. The one touch I found distinctly great was the red city sky that lingers in the background throughout the issue. It gives a sense of Damage’s rage, and the highly apocalyptic situation that the city has now found itself in. The rest of the issue, I can’t say too much for. Damage’s eyes seem to have a kind of radiation glow that appears inconsistently from different angles, and the whole city is a picture of every desaturated action movie palette ever. I do really like Morey’s shading, however. He brings a soft realism to his characters that’s almost painterly and looks nice with up close shots, especially of Damage’s handsome mug.

Essentially, “Damage” #1 is just about everything you’d expect from looking at the cover. The story takes very few surprising turns, with some interesting mystery surrounding the title character, but everything else suffering from paper-thin depth. Daniel, Miki and Morey’s art is bombastic and cinematic in all the best ways, but the palette comes off as a tad generic at times. Come for the cheap action thrills, but not for character depth or substantial intrigue.

Final Score: 6.5 – Prioritising style over substance, “Damage” #1 struggles to holds together an interesting plot but lucks out with an all-star art team that embody the term ‘huge’.