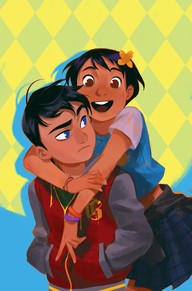 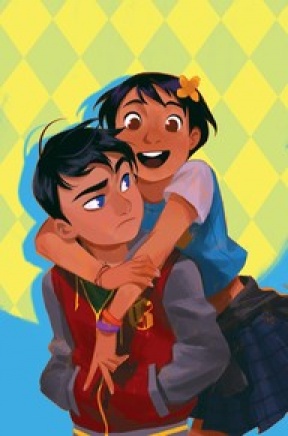 Special guest student Damian Wayne drops by the academy and he is not pleased to meet his new classmates!

Kid sidekicks have been a staple of DC comics since Dick Grayson put on the tights. Given the frequency that these young characters appear, fight crime, die and are resurrected, it’s easy to forget that they are, you know, children. From the moment of his introduction, Damian Wayne has been the spitting image of his brooding father. It’s what made him such a good team mate for the more lighthearted Grayson, and a total buzzkill for anyone else, especially his fellow teens. At a glance, it feels like Damian would barely make it through one day at Gotham Academy, he actually barely makes it through one class.

With Olive still away from the school, Maps had found herself with a lot of free time to plan the perfect Serpents & Spells team. Her concentration is broken when the brash and aloof Damian Wayne crashes through her class on his first day at school. Recognizing Damian’s brilliance before he has a chance to tell her how brilliant his is, Maps knows with him on her team they’ll be unbeatable. A magic quill and spell later, Damian and Maps find themselves stuck together, literally, and forced to solve the mystery as partners.

One of the driving forces behind the success of “Gotham Academy” is the relationship between Olive and Maps. Their friendship has felt real from the beginning, and has provided a strong anchor as the strangeness the Academy swirls around them. With Olive gone for the first time, there could be a fear that Maps would end up wandering aimlessly through the school halls. Becky Cloonan and Brenden Fletcher have wisely chosen to embrace this opportunity to throw another strong-willed character into the mix with the arrival of Damian.

Far from dominating the issue and turning this into a Damien story set at the school, it takes no time for Cloonan and Fletcher to integrate the character into the established world of the series. They do a great job ensuring that Maps retains her own voice and agency as an independent character. It never feels like she has just become a sidekick to Damian or has been demoted in her own series. The writers have carved out her own clear spot in this world, and even an appearance from a brash character like Damian doesn’t feel like a threat or incursion.

Fans of Damian’s dangerous level of snark and arrogance will be pleased with his appearance. Cloonan and Fletcher nail his voice right away, and it feels like he walked right out of a Grant Morrison or Peter Tomasi book. Given the somewhat earnest demeanor of both Maps and Olive, the writers seem to relish the opportunity to let Damian’s sarcasm drip from the page.

In addition to Olive, also absent in this issue is regular artist Karl Kerschl, allowing Mingjue Helen Chen to enter the Academy. From page one, it’s clear that Chen is a very distinctive artist, but she has managed to maintain the tone and feel of the previous issues. She stays close to the familiar character designs established by Kerschl but her painterly style manages to make them feel completely new.

Chen’s style feels very cinematic, but not the traditional sense of the term, which conjures up images of widescreen vistas and hyper-realistic characters. Chen’s pages almost look like stills from a Pixar film, and a great Pixar film at that. As shown in a fascinating video on her website, Chen creates her images through layering, adding in many details as she goes. The end result doesn’t look quite like traditional painting or pencil work.

The story spans from bright classrooms to dark cemeteries, and Chen makes it feel consistent and unified. Each scene is filled with details and highlights that make them feel like real, lived in places. Chen uses of a soft focus on the backgrounds make the areas seem large and vast. A quick glance behind Damian will reveal the faint outlines of tombstones, which increases the feeling of danger and isolation.

With all the talk of dangerous cemeteries, it should be noted that Chen maintains the series lighthearted tone. This does not mean that the characters feel impervious to danger or threats. This series has made the stakes feel real without resorting to the usual route of gloom and grittiness, and Chen carries on this tradition without breaking stride.

This series has often been described as ‘Harry-Potter-in-Gotham”, and it’s honestly an apt comparison. It’s adolescents at a fancy boarding school where strange things keeping happening, and the title of this issue even has “Quill” in it. The good thing about “Gotham Academy” is that its characterizations are so strong and specific that it never feels like a ripoff. The creative team have really put in the effort to make it feel unique.

This is a complete story told in a single issue, but it never once feels rushed or dashed off. Writers Becky Cloonan and Brendan Fletcher have crafted a story that ebbs and flows, which moves the plot along quickly while ensuring the dialogue and narration with strong character moments. Mingjue Helen Chen stays true to the specific look that was established by Karl Kerschel, while clearly putting her own visual stamp on the issue.

Final Verdict: 8.5 – It’s another fun and exciting adventure, the kind that has already made “Gotham Academy” a must-read for those looking for something a little different from DC.