With the fourth of the comics from DC Black Label’s “Hill House Comics” pop-up imprint, welcome to a land of supernatural mystique from a vision of 1800s New York that would fit into many a penny dreadful. 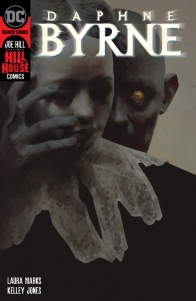 In the gaslit splendor of late 19th-century New York, rage builds inside 14-year-old Daphne. The sudden death of her father has left her alone with her irresponsible, grief-stricken mother-who becomes easy prey for a group of occultists promising to contact her dead husband. While fighting to disentangle her mother from these charlatans, Daphne begins to sense a strange, insidious presence in her own body…an entity with unspeakable appetites. What does “Brother” want? And could she even stop him if she tried?

From the outset, Laura Marks writes “Daphne Byrne” #1 in a style that could remind one of Showtime’s Penny Dreadful, using a slow buildup of possibly supernatural occurrences in a nineteenth-century setting. The structure itself harkens back to the eponymous storytelling style of the penny dreadful, cheaply sold horror stories of the era. Using a deliberately creepy atmosphere and several overtly unnatural experiences, Marks starts with something of a bait and switch in a focus on the widowed Mrs. Byrne before turning the focus on to the rather odd Daphne herself. Struggles range from the mundane troubles of schoolroom bullying to the otherworldly experiences of séances and intriguing dreams.

The circumstances surrounding Daphne’s father Frederick are indicative of the kind of story readers are up for. On the one hand, there is a heavy implication as to the manner in which he died through talk of the shameful nature of the demise. On the other, there are the various happenings that seem to connect to him, from the aforementioned séances (mentioned in the solicitation as those of the charlatan occultists) to Daphne’s connection with whatever dark entity has come to her dreams. Together, these elements merge the fantastical with the relatively normal, creating a situation that fits into both worlds and helps to slowly guide the audience into the realm of the supernatural, of lands beyond death and into the realms of magic.

What is real, and what is imagined? What kinds of supernatural behavior is to come in this installment to the “Hill House Comics” imprint? All of these questions roam in the background throughout “Daphne Byrne” #1, without much made absolutely clear by the time of its conclusion.

What is clear is the fact that Marks puts a fairly large amount of trust in readers’ ability to figure out the implied events that are not outright shown, much like how she puts information forward regarding her rather clever protagonist through her actions rather than outright telling how she is intelligent. As noted above, there is talk about the manner in which Frederick Byrne died. Without saying anything up front, and only ever giving the barest of details, Marks is able to give a hint as to what exactly happened, though perhaps not why it did. This kind of trust helps to keep readers’ confidence in the writing, enticing them to read more with the hope of figuring out more of the mystery around our eponymous character for themselves by reading between the lines.

Kelley Jones’s art style can be described as, in some senses, a modernized take on gothic styles, in keeping with the religious atmosphere and the earlier time period. In some senses, it even harkens to Victorian literature, which would have had a similar placement in time, though not the physical setting.

Jones focuses heavily on the use of shadows and an implication of the horrible things that may lurk within them. This focus on darkness is especially potent in the more supernatural scenes such as the two séances and Daphne’s dream, giving an overall impression that certain elements are beyond mortal ken and should be left away from human eyes, but also leaving room for curiosity about those very same elements that could easily lead to characters’ doom. This concentration on shadow and its effects can be seen overtly through two different scenes at a graveyard. In one, during the day, Jones provides both comfort and sadness, a kind of solace amongst other things going wrong. In the other, during the night, the impressions are far more nerve-wracking, with the area seeming to be outright haunted in keeping with the heightened supernatural bent of the events.

In that Gothic style, Jones’s interesting angles for artwork help to set a mood. Daphne’s first appearance is shown from above, with her looking straight into the “camera,” seemingly intended to unnerve readers with the implication that she can see them on some level. In another case, two different perspectives on a situation, one from a worm’s eye view deep under a sewer grate, and the other a bird’s eye view from the edge of a rooftop, both seem to indicate that someone or something is watching the Byrnes as they argue, whether the watcher be of the living or, as implied through some of the writing, of the dead.

Much like Jones’s artwork, Michelle Madsen’s colors have a change depending on the amount of shadow, helping to change the mood entirely from one scenario to another. The dresses of Daphne’s classmates are rather vibrant for the setting, with bright yellow, blue, and pink to help them stick out from the pack, similar to the interior of the Byrne family home’s use of orange and yellow to push away the dark. In contrast, the graveyard, the séance scenes, and Daphne’s time alone in her room all have a decidedly darker palette, using greens and greys alongside the orange of fallen leaves to give a sour feeling in the audience’s mind. Even scenes like the nameless beggar, while also having a form of yellow and seemingly human color tones for the skin, are all given a sickly hue to disturb readers while not making him seem to be too otherworldly.

Final Verdict: 7.5– An intriguing story propped up by excellent artwork and colors, “Daphne Byrne” shows a lot of promise for a particular kind of haunting.