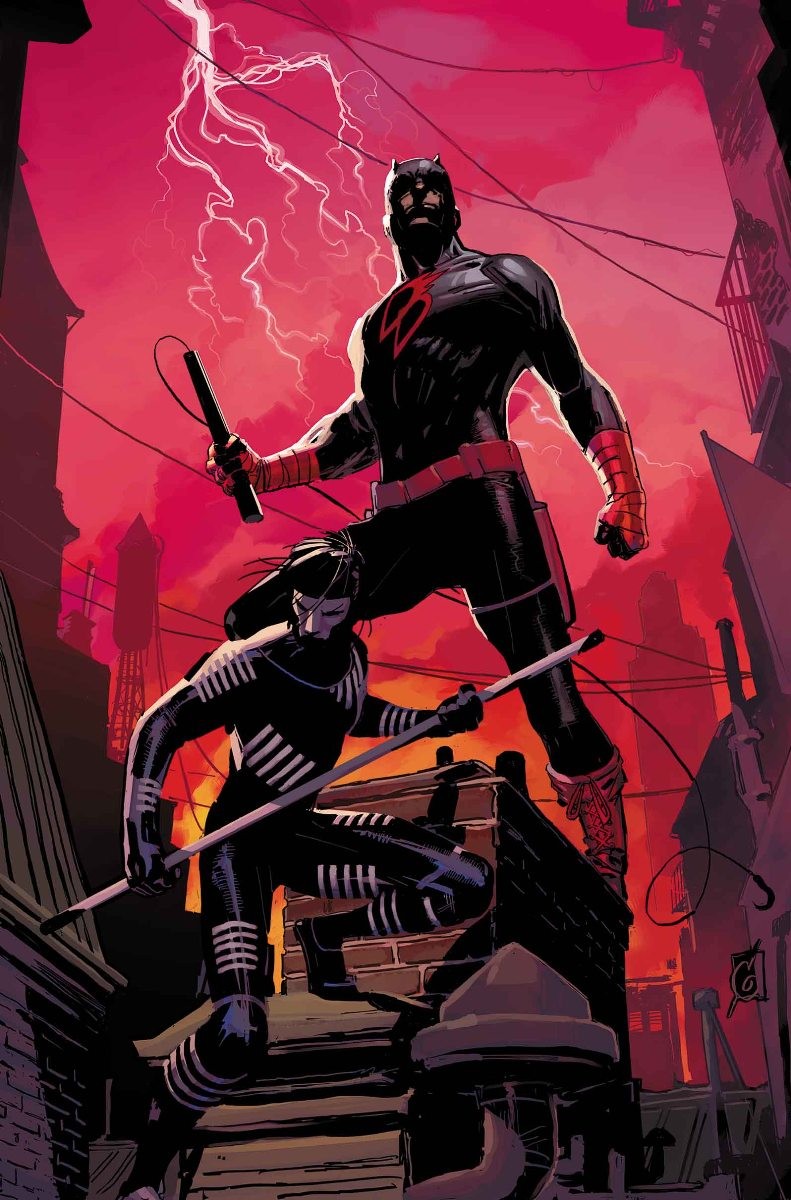 With his multi-media standing higher than it’s ever been, Daredevil makes his return to New York with some familiarity and some not-so-familiarity. How does it stand up? 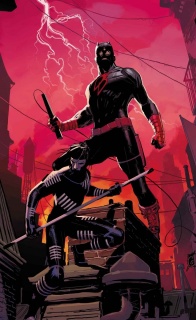 Back in black and on his home turf, Daredevil begins again in New York City as a new enemy emerges. Meanwhile his alter ego, Matt Murdock, is on a new side of the law in the District Attorney’s office. Fighting crime in the shadows, prosecuting bad guys in the light, it’s a whole new chapter for our man without fear- including the arrival of the devil’s advocate. Welcome to Hell, Blindspot.

Waid and Samnee’s run is over. Deal with it.

The above is a preemptive retort to any and all who are ready to savage their keyboards to complain in the comments as well as a bit of the mission statement with this issue. The eight month skip for Mr. Murdock has brought about some change, some a bit more intriguing than others and the sort-of introduction of a new character.

First things first: the art. Now, I’ve only had exposure to Ron Garney’s art one other time, when he did the Malekith arc in “Thor, God of Thunder”. And I thought it was fine, it’s biggest sin being that it followed in the footsteps of the gorgeous Godbomb arc by Esad Ribic. Having said that: Oh wow his art here is nice. He and colorist Matt Milla bring the noir tone heavy in this issue to great effect.

I first have to discuss Garney’s inking on this book, specifically his characters. I can only describe it as “scratchy”, in a good way. It gives characters a bit of an angular look, but when it is combined with the heavy inks that Garney applies, it really does work. His design work for Daredevil’s black costume is a good one. Yes, the Daredevil on the cover look a bit more armored but it is much more streamlined inside, and the reds that Matt Milla uses for the boots and bandages and such really do help create a nice balance.

And blacks, reds and greys are the predominant colors in this palate. It brings out a visceral to the action scenes as Daredevil and his protegee, Blindspot, go to work. But I believe one important aspect one must discuss in terms of color is how Milla depicts Daredevil’s radar sense. Working in tandem with Garney work, there’s almost a bit of a water color feel to the radar sense as we watch through DD’s eyes as Blindspot fights invisibly. And the final pages of this book, Milla turns up the surrealness a bit to introduce a creepy looking villain. If there’s one flub to the art is that, because Blindspot has a cloaking device, it does look awkward when he’s depicted fighting without us looking through Daredevil’s eyes.

Now, onto the Soule’s script. And this is where some problems come in.

Let’s start with Sam Chung a.k.a. Blindspot. Now, I do like the character. That short story in the “All-New All-Different Point One” really did a good job on selling me on the character… yeah… let’s talk about that short story. I said in my review of that anthology that those stories shouldn’t have been required reading. So, let me be absolutely blunt about this: Unless you have read that short story, you will have no idea who Blindspot is because he comes into this book out of nowhere with barely any explanation whatsoever. It’s going to leave new readers confused and kind of rightly so, because, as I said, that short story should not have been mandatory.

That’s not the only problem we have here. Now, the scripting for the Daredevil parts of this are good. Enjoyable. The parts with Matt though? Okay, let’s talk about another big development: Matt Murdock’s secret identity is a secret again. The only one who knows is Foggy Nelson. Soule makes it a big mystery but, kind of like the whole kerfuffle with Cyclops, it comes off less as intriguing and more as just annoyingly vague for its own sake. I mean, I’m just going to make the assumption that Matt visited Mephisto’s Retcon Emporyum, your one-stop shop for all bullshit plot contrivances. And yes, this also marks the return of more dour Matt Murdock, with a nice layer of coldness to him.

Now, this may sound like I just slagged the story off, but there is a load of potential in this book. Matt on the opposite side of the bar and now a Public Defender. What makes this so chock full of potential is that, not only is this, to my knowledge, the first time this has been done, but this is also coming from a writer who may (again, to my knowledge) be the only one who is actually a practicing lawyer to give it a bit more authenticity.

Potential. That is the big showcase for this book. There is greatness under this issue. It’s going to need a bit more time to come out of its shell. It definitely has me coming back for issue #2 or at least a trade-wait.

Final Verdict: 6.7- Great art from Garney and Milla but the story needs to start firing on all cylinders fast.