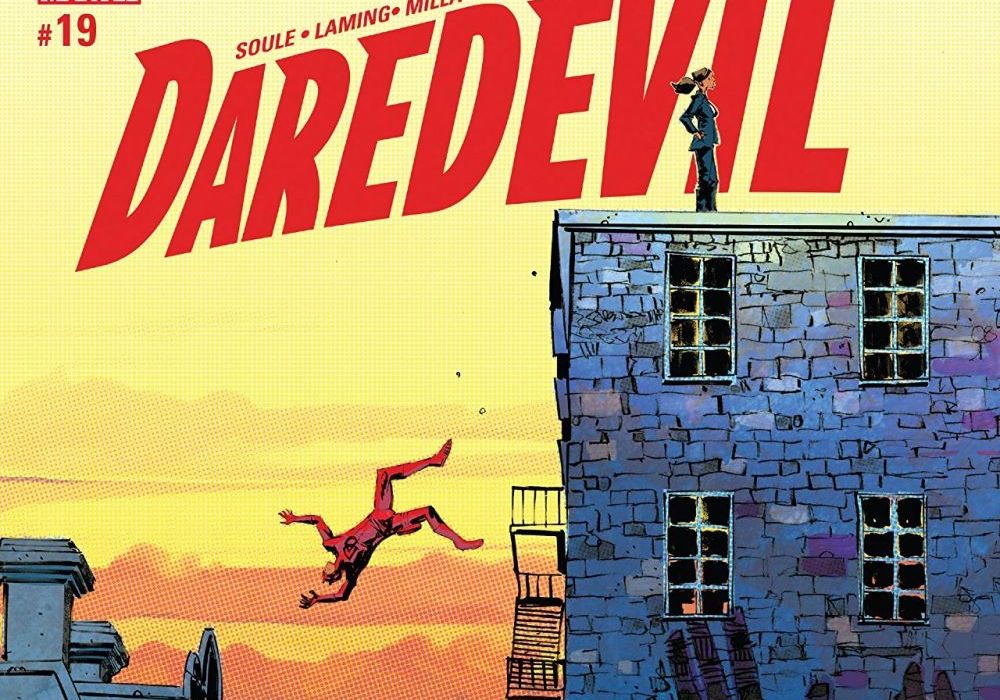 Charles Soule’s “Daredevil” run didn’t pop right out of the gate like I was expecting it too. However, Soule has been able to expand and make the most out this series overtime. The run so far has been built around the huge mysteries of what happened in Daredevil’s life post-“Secret Wars.” Filling in that information looked like a pretty standard affair…until this issue threw a massive curve ball and followed-up on the Netflix expanded Universe in a surprising and fascinating manner.

While the tone of this “Daredevil” run is ultimately more serious than what came before, Soule and Marc Laming double-down on the psychological paranoia that fueled some of Mark Waid and Chris Samnee’s greatest “Daredevil” stories. 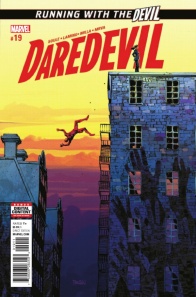 HE RIVETING MYSTERY BEHIND DAREDEVIL’S SECRET IDENTITY CONTINUES! How low will MATT MURDOCK sink to hide his secret identity? What caused the rift between Matt and his best friend, FOGGY? The revelations may be impossible to come back from…

While the the “Purple” arc has been enjoyable up to this point, I thought this series was out of tricks–yet this issue digs deeper into the mind of “Daredevil” than any other installment in the run. This story is a hallmark of the new “Daredevil” series, obfuscating the ending of a simple story with complex narrative techniques that need to be applied on a character with decades of storytelling behind him. Shifting the “Daredevil” status quo largely back-to-basics was disappointing at first, until Soule spent the time justifying why this was a healthy new start for the character’s future.

In past issues, Waid and Samnee wrote a happy ending for Murdock. Picking up the pieces and starting fresh with the character is more than intimidating and now Soule has the tough job of making sure he’s justifying these changes after spending so long shrouding them in mystery. However, the writer has the impossible task of still turning this in an entertaining story in a visual medium. What follows is a bevy of card tricks that infuse this issue with energy and lots of “Daredevil” continuity that is going to make devoted readers of this character scream with delight.

Even though this is definitively a huge (maybe even the biggest) piece of the “Purple” storyline, Soule starts from the ground-up, making this comic extremely accessible to anyone who has watched the “Daredevil” television series. From the beginning, the writer gently layers more and more continuity on the series until it perfectly fits into place with the rest of the story and series up to this point. When executed correctly, this is one of the most impressive narrative tricks that can be deployed in a comic book. More importantly, there’s also a collection of visual tricks that make this issue perfect for a visual medium.

Marc Laming keeps the signature style of this the book in check despite being a fill-in artist replacing both Ron Garney and Goron Sudzuka. Laming draws really slick, good-looking people, to the point where I did have problems telling some of the characters in this story apart. The saving grace of this issue is how all the character costumes all look so dynamic in his story. Laming follows-up on so many old designs but updates the look for a 2017 comic ever so slightly. Laming also bursts out the weird here with some really weird Kirby designs that he gets a chance to toy with.

Even if the artists on this series do change, the coloring could arguably be the most essential part to this book. Matt Milla Miroslav Mrva’s incredibly distinctive color palette always make this comic look incredibly stylish. There’s even a new hue of color that is more prominently added here to fit in with the rest of the comic. Laming evokes Sudzuka evocatively with thin figure work and an skinny, curvy lines-everybody in this issue is beautiful and a little creepy.

This issue is the kind of stuff longtime “Daredevil” readers are going to get a kick out of. New readers to this story so far or just this individual comic will find enough material in this eerie issue to get them to come back for more. “Purple” sailed up the psychological horror elements of “Daredevil” to the max, teasing why Murdock was willing to throw his entire life away and go back to cowl. I hope Soule continues to throw some huge curveballs at this comic and continue to look at the character in such a unique manner.

There’s never been a chapter on this new run that hasn’t had an excellent tone, meaning that when Soule is ready to deliver the content, there’s a good chance that the work will land. It hasn’t hurt that throughout this run “Daredevil” has had an excellent art team including Sudzuka, Garney and now Laming who fits in nicely with the others including the incredible color palette Miroslav Mrva and Matt Milla tying the entire package together. This one isn’t to be missed.

Final Verdict: 8.0: Soule and Laming introduce readers into some bleak, introspective territory in “Daredevil” #18, calling on the very core of the blind lawyer.