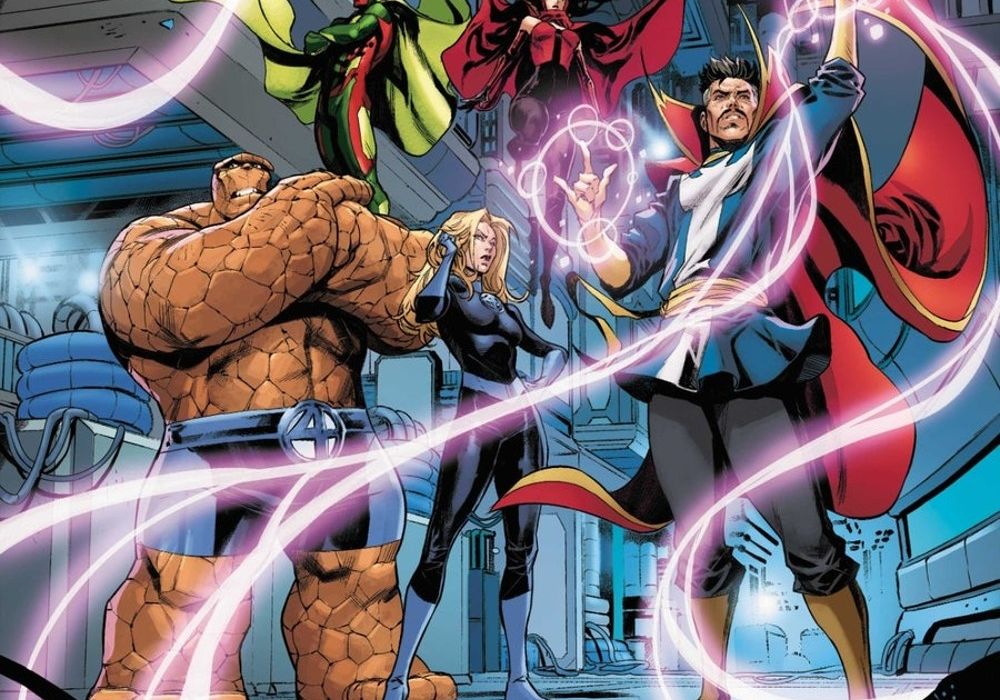 Welcome to an Earth where the mightiest heroes are plunged into not only an apocalyptic event, but one that leaves them powerless in unexpected ways. Some Spoilers Ahead 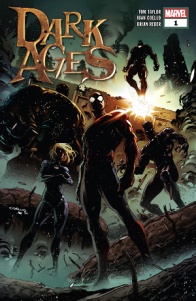 Teased in 2020 on Free Comic Book Day, this has been the event that has had fans wondering when it would actually come to light, but now seems to be the perfect time to release it. Lately, Marvel has been reveling in their alternate Earths and timelines getting some mainstream attention, with their two hit MCU T.V. series on Disney+, Loki and Marvel’s What If…. Both shows have their origins within the pages of Marvel Comics, but the use of a different timeline has always be a good, and occasionally easy way to tell a new adventure without unraveling decades of canon storytelling. Writer Tom Taylor (“Star Wars: Darth Maul”) uses this catalyst to tell of an event that gives readers a brand new miniseries that is all about tearing down and re-working our heroes and their world.

Taylor jumps right into the story, utilizing fan-favorite characters as a gateway into this new event series. Allowing us just a moment to sit with Peter Parker, his family, Luke Cage, and Jessica Jones on pizza night. When something sets off the Spidey-Sense of every Spider-Person in the Marvel universe, it quickly becomes apparent that there is something truly terrible on the horizon. Before giving us answers, we get a sweeping narrative throughout the world seeing how a few more heroes, mostly incredibly powerful Mutants, have also become aware of this coming threat. As a multitude of heroes begin to learn what is coming, it quickly becomes clear that this is going to be story of a grand scale that Marvel Comics’s readers, both veterans and novices, will be able to grasp. An apocalyptic event calls our heroes together.

Spider-Man swings through the city for answers, the Fantastic 4, Moon Girl, and Devil Dinosaur get a visit from Uatu the Watcher who gives them the full low down on what this threat is. A magical and mechanical being, known as The Unmaker, was placed at the center of the Earth eons ago. It is beginning to stir and will undoubtedly destroy the planet. There is no simple way of stopping this monster, and the world is in fact coming to an end. As our heroes form teams to stop The Unmaker and assist in the aftermath of the what’s to come, we get some great pairings that we don’t always get to see in the comics. This is far more than just an Avengers or X-Men team up.

There is mass death and destruction right off the bat, and as the heroes begin to believe that they have saved the planet, new twists occur that will leave the Earth without any power. So while many of our heroes still have their superpowers, those who rely on special suits or equipment are now all but helpless. The Earth has lost all electrical and mechanical power, effectively thrusting us back into the dark ages. This sort of story has been seen throughout comic books in one form or another, and we’ve had these characters placed in years long ago where such technology simply didn’t exist, but to see so many of them lose their abilities, and to see the world go dark in a modern age set book still holds a good amount of shock, and excuse the term, power. Taylor knows this and uses it to great effect, giving us just enough instances without over-doing it so that it will lose its importance for coming issues. Also, seeing some absolutely beloved characters die during the initial battle with The Unmaker still had the ability to shake me. These sort of story conventions don’t always work as with most “What If” stories. As they stand within their own universe, it is easy to hand wave it all away as non-canon, or not MY heroes, but as this Earth lines up so perfectly with the Earth 616 so many fans know, it hurts just enough. And, actually comes off as compelling. It also isn’t just a slew of good guys taking down one big bad, as other big time villains like Apocalypse are learning of the threat, and making their own plans as to how they can make this work in their favor.

This story looks to be one that will have a nice blend of fun, excitement, and real stakes for the characters. And with just six issues it will be a good one for all sorts of readers to pick up without feeling obligated to hang onto a long running story or series. Taylor’s script is tight with basically no fat to be seen. Giving us just enough dialogue and greater exposition to keep the story moving along. He never allows for the pace to let up, nor are we left in the dark with any of the plot. If you even have the most basic grasp on who these characters are you will not be lost in any regard. The storytelling never falls into the trap that so many crossover events have in the past of trying to catch readers up on weeks, months, or years of events while at the same time explaining why these characters need to team up. We get the threat and the team-up without any extraneous nonsense. Page after page we get story along with cause and effect all surmising in the final moments allowing for the rest of this story to move forward. How this new Earth is going to be in the time ahead of us is uncertain, but it looks like it is going to be full of complicated conflicts between heroes and villains alike.

Artist Iban Coello (“Superboy”) is a superhero mainstay with the bulk of his work being on big titles at both Marvel and DC. There is a reason for this, he makes gorgeous, if a little safe, work for these types of titles. He gives readers the characters as we know them best. Classic looks with a modern style. His ability to give us the heroes we love within incredible settings and dynamic battles makes an all-star like him a top choice for an event like this. He put in the work too, with no less than thirty main characters just in the first issue, we get a good look at all of them, and all were given the attention they deserve. He gave the same amount of love and detail to every scene, whether we’re seeing the Parkers’s pizza night or an epic battle at the center of the Earth. It is hard to be disappointed when the work is both stunning, and comforting. What is going to be really exciting is to see his work in the coming issues, as with this new electricity free Earth is going to give us a lot of new looks for these long-standing characters. Coello has proven himself many times, and this premiere issue is no different, that he can give us exactly what we want. So it will be fascinating to see him give us a post-apocalyptic wasteland take on many of our heroes costumes.

Like the illustrations he is coloring, Brian Reber (“Sinister War”) is an artist who uses his talents to give fans what they want, but with real mastery giving us striking books to pore over. Because of the sheer multitude of characters and scenarios on every page of this epic first issue, he too had quite the task ahead of him and he pulled it off beautifully. He closed the circle with Coello’s work to bring readers that familiar and welcome look while giving us work that feels important to those working on it rather than feeding us simply more conveyor belt products that would be easy for a major company like Marvel to dole out.

Nothing short of an incredibly fun epic event. It has its darker moments, but overall is the type of start to a miniseries that most readers should find enjoyable. It welcomes readers to join it without ever leaning into canon gate-keeping or overly simple storytelling. Its entire purpose is to give you something that is both familiar and fresh and it succeeds at both.

Final Verdict: 8.0, An exciting page turner crossover event that puts a new spin on quite a few ideas and plot devices Marvel fans have seen over the years.