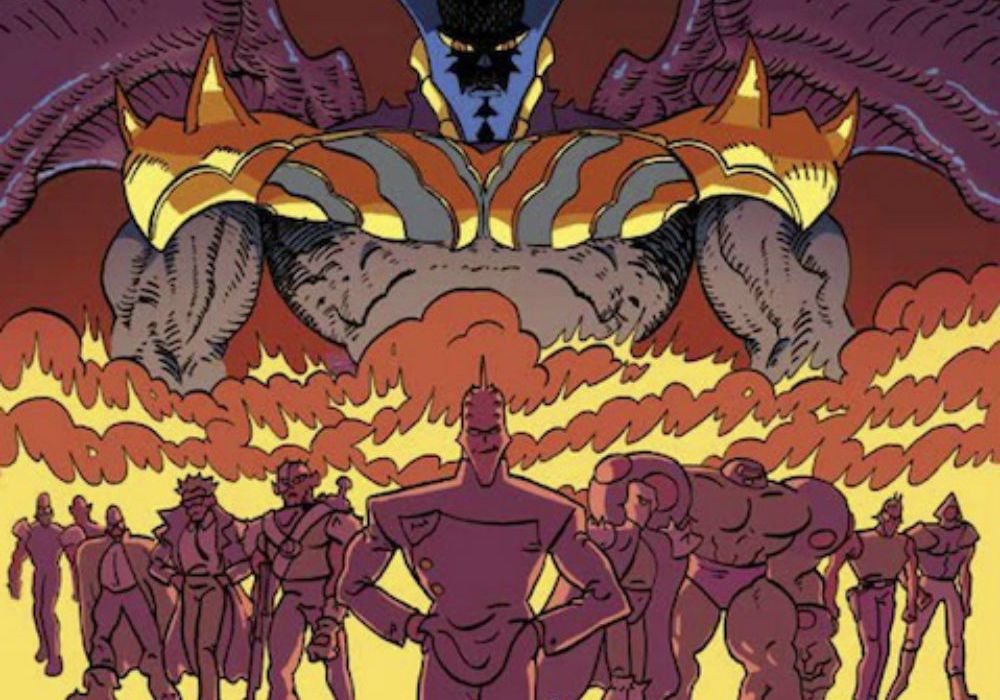 Sometimes being cool is enough. Al Gofa’s graphic novel, an awesome mish-mash of video games, manga and feverish childhood daydreams brought on by sugar-rush, is all-surface tale of super-warriors taking on one another in progressively more ridiculous fight scenes and “Beowulf” inspired boastful introductions. As every character and scene sets out to top the previous one the only question is – “can you ever have too much fun?”
Probably not. 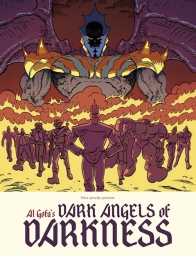 Cover by Al Gofa
Written, illustrated and Lettered by Al Gofa
A group of elite soldiers plot to overthrow a god, by perfecting the illegal act of FUSION, but if you plan to kill a god, you gotta be ready for divine punishment too. An book filled to the edges with raw muscle and A+ level action. We hope you have fun.

Take a note of the name, say it out loud, roll it on your tongue. “Dark Angels of Darkness.” There is a more than a hint of irony there, a knowing wink at the reader – they are not just ‘Angels of Darkness’ they are Dark Angels of Darkness. Thankfully the book doesn’t take the wink-wink approach any farther. It’s ridiculous, of course, intentionally over-the-top and build up mostly of cliché’ both in terms of characters and plotting; but it’s ridiculous in all the right ways – it has conviction, the willingness to go all the way with its stylistic approach.

Whatever faults Al Gofa has as a storyteller, we’ll get to them later, he does not fall to the trap of covering problems with plot with the excuse of self-awareness. He takes it as a given that both he and the reader know that this is a pastiche, a mixtape of a comic book, and knowing that we can enjoy it for what it is.

In the creator interview that can be found in the inner folds of the book (and how great is that book design? Peow books always seem to put more thought into their physical presentation than some publishers put into their content as a whole) Gofa speaks of liking primarily the moments a new character steps into the page. In these moments there’s a sense of excitement and endless potential that the actual stories can never quite capture.

True to this vision of his child-self, “Dark Angels of Darkness” is crafted as a story of a far-off world at war in which the forbidden art of fusion is resurrected by an ambitious general and his band of cohorts attempting to take down their own fusion-hating god-king. “Dark Angels of Darkness” uses the idea of fusion to explore important theoretical questions such as ‘would this dude look better with bazookas for arms?’ and ‘do bat wings make everything better?’ (The answer to both is a resounding yes.)

Al Gofa’s work here is all about form over substance, but the fact is that his form is in such tip top shape that it become substance by sheer force of will. Consider the way he draws the opening scene – two hyper-muscled warrior figures grab each other in passionate embrace, kiss and then explode into a new figure, skeletal face quickly given new fancy coating, who loudly admires its form “We feel so horny! Look at that ass!!!” everything is bold and dramatic- there is no process, only being. the protagonists and antagonists live their life like rock stars, always putting up show and being as loud as they can be.

None of this would work if Al Gofa wasn’t such a good artist: the action scenes are swift and exciting, people showing off various skills and weapons in increasingly elaborate ways; and whenever a new character appears on the page, which is roughly 60% of the book and the story’s raison d’être, they always look like they could star in a story of their own. That’s half of the fun of this moment – not only to see what they do but to imagine all the things they have already done, it’s the type of thing that makes the original “Star Wars” film so good: that we are thrown in the middle of events and see all these small hints for great things.

The problems occur towards the end when the ambitions of the action overpower Gofa’s abilities as a storyteller. As the story draws to a close we get the big battle to end all big battles and to be honest it was at this point that I knida got lost. I could tell who won but not quite how, and the choreography and geography of set pieces, so clear before, had become muddled. This reminds me of the befuddling ending of Ang Lee’s “Hulk” – sure, I get where you are going but I would like to able to see how you got there. Like the characters that inhabit it “Dark Angels of Darkness’” main sin is gluttony – it’s a gregarious book that wants to be more and more and more without bounds. And just when it reaches its zenith it becomes bloated.

Still, faults or no faults, it is quite an amazing ride. The end might be an overshot, but it overshoots in such a bold relentless way that you end up cheering for it for having the guts to go all the way.