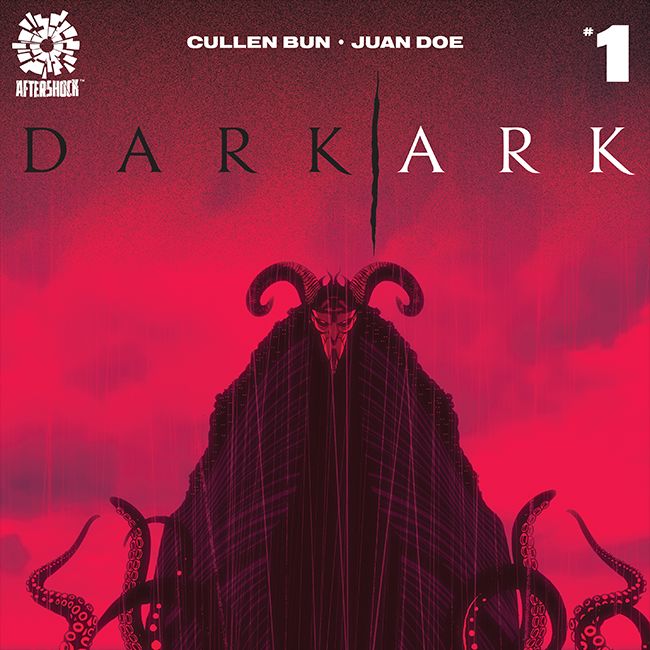 The Lord hath forsaken the world. All will drown and everything will be lost. Only Shrae, the sorcerer, can save that which prowls in the dark and all the creatures that feast upon the creatures of the light. Welcome to the Dark Ark, where spoilers and murder abound. 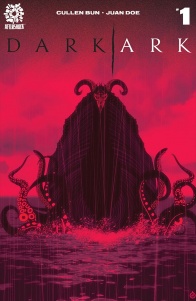 NEW SERIES!
The wickedness of mankind has moved the Creator to destroy the world by way of the flood. Noah has been tasked with building an ark to save his family and the animals of the world. But this is not Noah’s story. For darker powers have commanded the sorcerer Shrae to build his own ark and save the unnatural creatures of the world—such as the vampires, the dragons, the naga, and the manticore. But what will happen on a vessel crawling with monsters, where insidious intrigue and horrific violence are the rule of law?

This isn’t the first time we’ve seen comics reinterpret Biblical events (see Jason Aaron’s “The Goddamned”) and it won’t be the last. It’s always interesting to see how each creator approaches the stories and with this one, Bunn and Doe ask the question, What if there was a second ark and what would that mean?

I’m a sucker for these kinds of stories (I saw that odd trainwreck of a movie that was Noah), especially when they’re populated with the weird and the wonderful. (Have you heard the one about the Rabbi who shoots laser beams from his eyes? Look it up) This is all to say that this story is right in my wheelhouse and considering it’s written by Cullen “I write way too many horror comics” Bunn and drawn by Juan “All things Aftershock” Doe, I should have enjoyed this much more than I did.

Okay, let me explain myself. “Dark Ark” has a fantastic concept, quite literally flipping the story by having a sorcerer (someone expressly called a sinner by The Bible) being told by a powerful, malevolent being that God has abandoned the world. Therefore he, as the most sinful man, must save all those creatures that God has forsaken. Yet he cannot kill Noah and his boat, for if they die, so does he. It makes the story infinitely more interesting because we have so many dynamics to work with.

But then, as the issue progresses, it become apparent that, at least at first, this isn’t going to be the focus. Instead, we’ve got the usual power struggles between creatures with large egos and a murder mystery a la the first arc of “Fables.” It just felt like nothing new, which kind of bummed me out.

Also, as much as I love Juan Doe’s artwork here, I don’t know how well it fits. Were we to spend 95% of the time with the monsters and watching the flood waters rage beneath the oak casket that is the ark, I think I’d have a different tune. Doe’s people have an overly simplistic look to them as compared to the more complex and interesting designs of the monsters.

This isn’t to say his people are bad. No, they’re very expressive. The scenes Doe creates around them are weighty, but — especially in the more quiet moments — they have surrealist rendering. The best examples of this are during and after the dinner scene, about mid-way through the comic. Shrae is recounting for his family what his Dark Lord told him, inter-cutting between the past and the present. As he tells the story, he keeps his head down, solemn, and contemplative while the scenes of the past show him cowering in fear beneath the shadow of the devil.

Doe’s sense of scale is also put to the test here, being forced to deities of epic proportions, global destruction and arks that must literally hold all the world’s animals. He uses his paneling to make it all feel suitably imposing, with the ark distorting across the panels early on and, later, the dark lord looking down upon Shrae with his burning eyes, literally towering over him as the sky is an otherworldly red.

However, scenes like these are the exception and not the rule for this issue. The monsters, while all visually interesting, especially the manticore who’s bright reds and yellows pop off the page, are not interesting as characters. Their fighting is so generic (factional differences, the haughty, powerful team with a secret that implies they are the ones who orchestrated the murder of another leader) that it’s hard to want to watch them. The humans, on the other hand, are interesting in the questions the bring up but visually they are pretty boring.

I think my big problem with this is that it’s just too clean and bright. This is a story called “Dark Ark,” that takes place during a storm and flood of literal apocalyptic proportions, and yet it feels more like we’re watching two ships lost at sea. The storm is mere set dressing, the color palate is filled with bright colors that make everything very clear but also makes it hard to set a foreboding atmosphere. There is this distinct lack of heavy shadows, something which most ships would definitely have, and would have greatly assisted in making the issue feel creepier. Hell, during the final confrontation between Naga and the Vampires, the background is this harsh red that distracts from the action.

Speaking of action, there is a lot in this issue. We don’t get too many panels where the action slows a little, where the dialogue takes a break, and allows us to decompress or lets the characters contemplate. This issue has to accomplish a lot and introduce a lot, so I can’t fault that too much, but it is noticeable and, for some, can make this issue feel like it just bowls through its set up.

Maybe I’m looking for one story while Bunn and Doe present another but it’s still disappointing to not see this inherently creepy idea taken to its fullest.

Final Verdict: 6.9. A good first issue but one which could have been a whole lot stronger and a whole lot creepier.