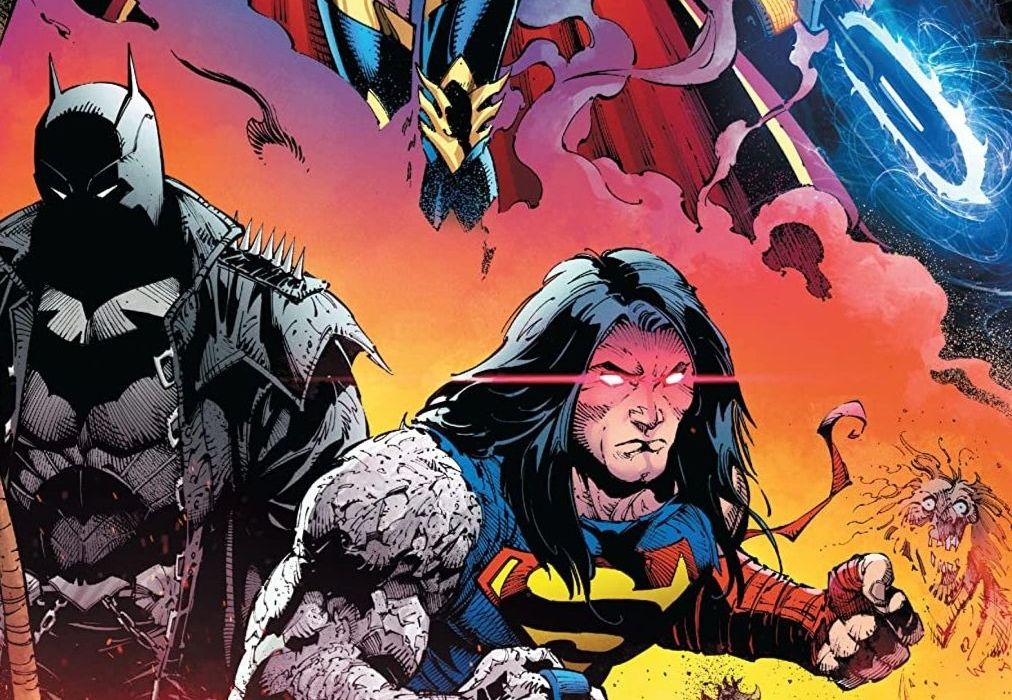 Metal and superhero comics seem like a natural fit. Both exist in heightened worlds of bombastic energy and forward momentum. Both embrace a variety of tones, ranging from dark and moody to swashbuckling and fun, and in many cases, both tell epic stories of struggles and triumph. In “Dark Nights: Death Metal” #1, Scott Snyder and Greg Capullo write a comic that is overwhelmingly dense in DC lore but adds enough humor and bombast to live up to the musical genre that it’s inspired by. 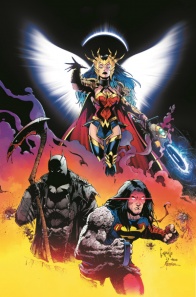 Cover by Greg Capullo, Jonathan Glapion, and FCO Plascencia
Written by Scott Snyder
Illustrated by Greg Capullo
Inked By Jonathan Glapion
Colored by FCO Plascencia
Lettered by Tom Napolitano
Get ready for the earth-shattering encore! The legendary team behind Dark Nights: Metal and Batman: Last Knight on Earth take center stage and reunite for one last tour.
When the Earth is enveloped by the Dark Multiverse, the Justice League is at the mercy of the Batman Who Laughs. Humanity struggles to survive in a hellish landscape twisted beyond recognition, while Batman, Wonder Woman, and Superman have all been separated and fight to survive. Unleash the beast and let the head banging begin!

The world of ‘Dark Knights: Death Metal’ is just that, dark. The majority of the premier issue to the “anti-crisis” does a great job of establishing just how dire the stakes are for the entirety of the DC multiverse. Most of the issue is spent with Wonder Woman, now the warden of hell. Diana is a good person to follow in the early parts of the issue, establishing just how much has been lost, how much the world has been warped in the image of The Batman who Laughs. Diana is also broken. Throughout the issue, we learn that if she does not do her job, her sisters will face the consequences. It makes her an interesting focus for “Dark Knights: Death Metal” #1 because although she is defeated, although she is following the whims of a madman to keep those she loves safe, she still has some fighting spirit left. This is especially true in her interactions with Swamp Thing, who seems to be the voice of reason for Diana. As he reminds her in the early parts of the issue, she is saving many by playing her part, even if it’s a role she resents. As the scope expands, we learn that she is not alone, that the rest of the Justice League has been forced into the service of this new multiverse threatening regime.

In one of the strongest sequences in the book, The Batman Who Laughs, assembles the Justice League (along with their Bat handlers) in a field of Gotham, a field where a group of Revolutionary War soldiers, known as the Dead Bats, were killed in the tunnels they used to fight the British. The sequence begins with dialogue on a title card, a long and rambling story building up to the ultimate reveal that the soldiers who had fought and died for freedom were now buried underneath a world run by a madman. Starting the scene on a title card is smart because it allows Snyder to build some tension while also letting Tom Napolitano establish the threat of The Batman Who Laughs. The red jagged letters on the black background do a lot of heavy lifting building up the threat of the character’s reveal, telling a story of loss and sacrifice with the punchline that it was all for naught. The lettering is menacing, which makes a seemingly normal story about a park in Gotham feel ominous and daunting, just showing the image of a corrupted Gotham wouldn’t have had the same impact. The monologue and reveal are good, but the images throughout the section are wonderful. We are treated to various multiverse iterations of Batman, including a Cthulu inspired Batman and a Deathstroke Batman, as well as the Justice League in heavy metal-inspired costumes. Like any good multiverse spanning story, the cameos of the various Batman capture the imagination, showing the universe of potential stories, stories that might never be told if the heroes lose.

The Images throughout “Dark Nights: Death Meta” #1 wouldn’t look out of place spray-painted on the side of the van. Greg Capullo does an impressive job at capturing the art style of metal album covers, and each setting gives him the chance to create memorable backgrounds. Hell is sharp and cavernous a cool combination of natural cavernous features like stalagmites and stalactites, combined with Greek architecture. Gotham, on the other hand, allows him to create dense forests and sharp spires of the evil architecture of The Batman Who Laughs’ capital city. The style of the book really helps to put you in a different world, one that is a little darker, but also more heightened. When you’re reading a book with “Death Metal” in the title, heightened is exactly what you’re looking for, and on that front Capullo, Jonathan Glapion, and FCO Plascencia deliver in a major way.

There’s a lot to like about “Dark Nights: Death Metal” #1, but an impressive thing was how well Snyder is able to handle the meta DC lore in a way that isn’t that daunting to new readers. One final reason why Diana is the perfect character to follow in this book is that once Bruce starts fighting back, she argues that his scale is too small. Why save one planet when you can save a multiverse? This leads to a rather daunting sequence where Wally West explains what feels like a large chunk of the DC mythos in two pages. It’s a lot, especially for newer readers, but Snyder does a good job of boiling down ideas like, “the speed force,” “The Anti-Life Equation” and many others into two core concepts, things that create connections between us and things that drive us apart. Is it simplistic? Perhaps, but for a relatively new DC reader like myself, it made the whole conflict less daunting. It helps to make the stakes of the conflict clear, while still having fun with years of mythology and deep cuts.

In the end, there’s a lot of promise in “Dark Nights: Death Metal” #1. There’s a lot of table setting and world-building, but there were also plenty of moments that felt worthy of “melting your face off.” You had Batman commanding an army of Revolutionary zombies! Lobo doing something in deep space! An ANTI-CRISIS! But it all pales in comparison to Wonder Woman’s true moment of triumphs, defeating The Batman Who Laughs with a chainsaw made out of the invisible jet. That image? Pure metal!