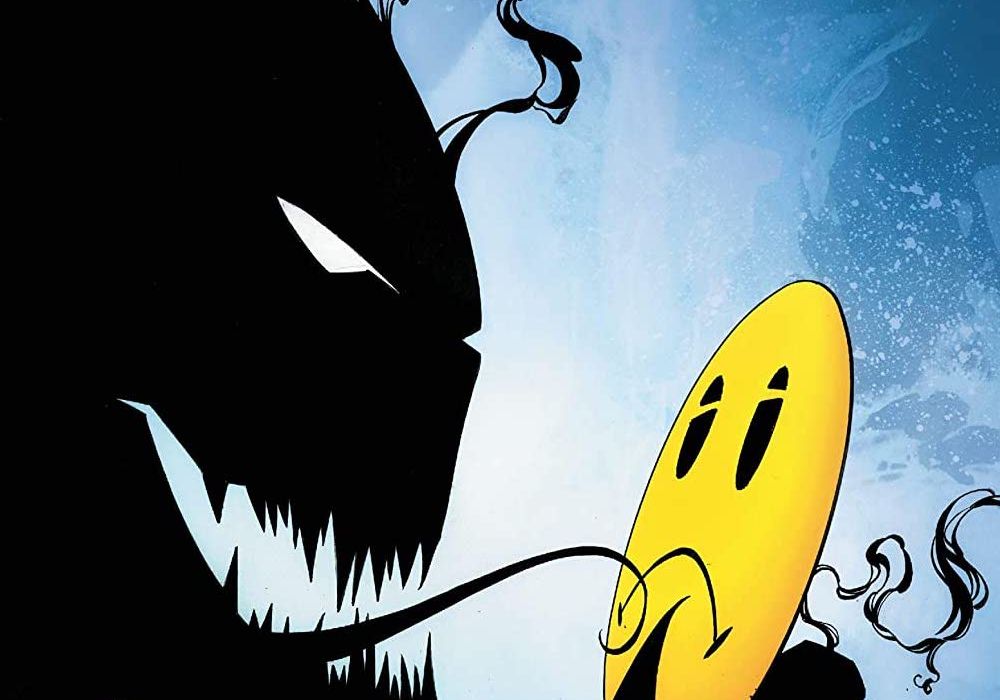 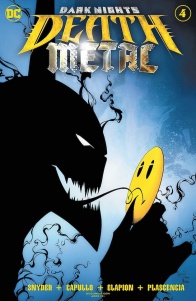 Wonder Woman, Batman, and Superman are trapped in nightmare worlds within the Dark Multiverse! They’ll need to face down their fiercest foes once again if they hope to accomplish their mission and bring back a power capable of stopping the Darkest Knight. But what horrors has he unleased on Earth while they’ve been locked away?!

The first interior page of “Dark Nights: Death Metal” #4 offers a sense of relief. Snyder returns to the framing device of the series that adds a bit of levity to the title. An event comic with a serious scope also needs a few moments of laughter to ease the tension. Snyder uses the next page to weave in the remaining plot threads. After so many special issues, Snyder comfortably reintroduces readers back into “Dark Nights: Death Metal.” With so much real estate on the page, I’m confused why Snyder couldn’t pair his script down further and lessen the number of plot threads in the comic. The Robin King, Swamp Thing, and Harley Quinn story feels like an afterthought that the comic book does not have room to flesh out. Thankfully, Superman, Wonder Woman, Flash, and Batman threads make significant plot advances that push this issue to evoke an impressive level of quality.

Arguably the most emotional portion of this issue is the return of Superboy-Prime. If there’s a Crisis in the DC Universe chances are good that Superboy-Prime is contractually obligated to make an appearance. Prime’s motivation is incredibly well fleshed out by Snyder who gives him a really harrowing motive in support of the darker side of the DC Universe. I was horrified to learn the justification of his actions matching years of the character’s backstory. This subplot and interaction with Wonder Woman is the centerpiece of the issue and leads into the explosive final pages of the issue. The Flash story is another essential piece of the narrative that delivers on the promise of the cover and is the key element of a staggering cliffhanger.

There’s a monstrous amount of ideas in “Dark Nights: Death Metal” #4 but Greg Capullo’s inventive linework makes the title appear concise. The framing on these pages and the composition of panels are absolutely staggering. The second-to-last page is a sight to behold. Numerous generations of The Flash are represented on one page alongside fan-favorites like Harley Quinn. These characters are rendered with personality sporting a pose that captures the imagination of the page. The pages with Batman are some of the most experimental and omit key elements of anatomy that sparks massive intrigue. The simplistic but hectic manner from Snyder’s script is perfectly captured in Capullo’s impressive compositions. Snyder and Capullo have established a strong working relationship that this issue capitalizes on perfectly.

With a series that is so incredibly bombastic, I was happy to see “Dark Nights: Death Metal” #4 exercise a certain amount of restraint. “Dark Nights: Death Metal” #4 sets up the major plot threads early on in the story and focuses on providing small updates to all of them. Snyder also looks back on past DC events in a meta-landscape, particularly shouting out important DC events like “Final Crisis.” However, this chapter really offers readers a direction for content from really important recent stories like “Watchmen” and “Doomsday Clock.” It’s particularly impressive to factor in how the series actually addresses these stories while adding in elements of the original “Dark Nights: Metal” storyline.

After the lack of focus from the past few issues, I was shocked to see “Dark Nights: Death Metal” #4 dial up the plot and transition into the second half of the series smoothly. This issue has major plot moments that are essential to DC readers who are interested and invest in the shared Universe. While “Dark Nights: Death Metal” #4 would be difficult to ask for new readers to step into, it should be able to sustain an impressive amount of intrigue to start discovering some of the nuances from others’ stories. Going forward, I would like to see Snyder and Capullo continue to transition into the next phase of the DC Universe and put the final word on Perpetua and the story of “Dark Nights: Metal.”

Final Verdict: 8.0 – “Dark Nights: Death Metal” #4 is an apocalyptic issue that combines several plot threads together to craft a new direction for the event.