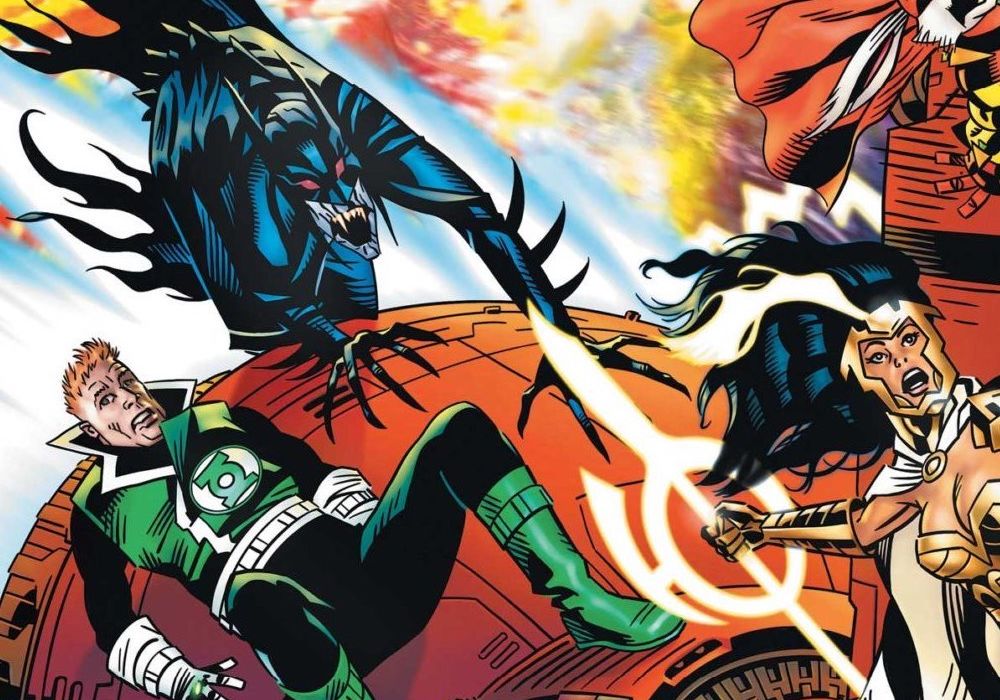 Now that the series is in the second half, it is time for “Dark Nights: Death Metal” to get interesting. Writer James Tynion IV is stepping into a new one-shot “Dark Nights: Death Metal Multiverse’s End” #1 to catch readers up to speed with a few Green Lanterns and Multiverse favorites. These favorites span different Multiverses but they are all facing a common threat! Heroes from titles like “The Multiversity” and beyond come together including Owlman, President Superman, Iris West, Captain Carrot, Guy Gardner, and more populate this busy script. Will Tynion and artist Juan Gedeon be able to tell a story with this wide span of characters that is coherent? Will this one-shot be able to transition readers into the second wave of “Dark Nights: Death Metal” successfully? Find out with our full review that has an emphasis on DC’s premiere hero, Captain Carrot! 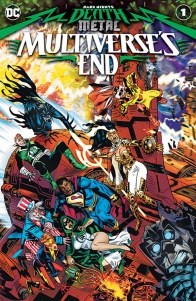 Perpetua, mother of all existence, has culled all life and creation in the Multiverse, condensing all beings to one planet: Earth-Prime. In her quest for power and dominance, she rules absolutely and in totality, using her children-the Monitors and Anti-Monitors-as her heralds and destructors. But a group of heroes has banded together across multiple worlds in a last-ditch effort to stop her from destroying all of existence: Owlman, President Superman, Iris West, Captain Carrot, Guy Gardner, and others have chosen to make their final stand in a battle they’re destined to lose!

It is hard to find an entry point into “Dark Nights: Death Metal Multiverse’s End” #1 simply because the issue accommodates so many characters. Tynion also gives readers a backstory on Scott Snyder and Jorge Jimenez’s “Justice League” run which he helped with. Tynion evens brings readers up to date on the recent developments of “Dark Nights: Death Metal.” We check in with heroes of “The Multiversity” including Calvin Ellis and Captain Carrot. Most importantly, Tynion finds a great entry point into Owlman and John Stewart. It is incredible to account for just how much ground is broken in this one issue. Tynion’s meticulous plotting is on impressive display here but his combination of heady plotting and odd character pairings make this issue an overstuffed mess of ideas.

Tynion has so much going on on the page at any given time that the artist attached to this project would have to be excellent. Artist Juan Gedeon fills these boxes and is able to capture an immense amount of detail while keeping the story flowing. Gedeon draws integral villains like Perpetua with a sense of malice. Yet, his depiction with Caption Carrot is filled with pathos and beauty. When pages are filled with characters spanning The Multiverse it is clear which character is which. Gedeon draws wonderfully vivid characters and when Tynion script becomes too ambitious, Gedeon makes sure that every page looks beautiful. Gedeon renders past DC events with a modern eye that recontextualizes these moments. Scenes from the original “Dark Nights: Metal,” “Final Crisis,” and “Crisis on Infinite Earths” look incredibly modern.

Tynion melds a lot of different ideas and characters into one issue. The comic book is primarily centered around Owlman who has an interesting place in the Death Metal world. Tynion establishes his place in DC and DC continuity but with so much focus on logistics and other characters, Tynion barely has time to put Owlman where he needs to be. Tynion definitely manages to forge his place in the story and give readers hints to where he might be going next. When Captain Carrot almost gets the same attention as Owlman in the same issue, it can be hard for Tynion to keep his focus in the story. While I would have like to see an issue flesh out all of these elements instead of trying to capture so many, this is definitely a solid follow-up to “The Multiversity.”

Tynion has an incredible sense of optimism that he infuses into each of these characters. I was thrilled to see him even bring some optimism to Owlman himself. The scenes where John Stewart and Owlman start seeing eye-to-eye are some of the infectious moments in the script. There’s also a fascinating level of parody that Tynion imbues into Captain Carrot who has a majestic sense of self-doubt that is fascinating to consider. Tynion’s level of optimism combined with these heroes allows for a really entertaining script that is bogged down by the mass amount of character and exposition in this issue. In addition to the previous characters, this issue is also trying to take multiple Batman characters and years of continuity into consideration. I’m in awe of what Tynion and his collaborators accomplished here but I also recognize that there is more than could have potentially been achieved with a more narrow sense of scope.

If you are a massive DC comics fan there is a level of wonder that “Dark Nights: Death Metal Multiverse’s End” #1 attains that is worth a purchase. Juan Gedeon’s beautiful art is worth the issue’s purchase price. This is also a great way for readers to become more acclimated with the greater DC Universe or even get introduced to Captain Carrot. The immense level of exposition ultimately does weigh the issue down. If you are the least bit curious about the sheer absurdity of any of these heroes, I don’t think you can go wrong with “Dark Nights: Death Metal Multiverse’s End” #1.