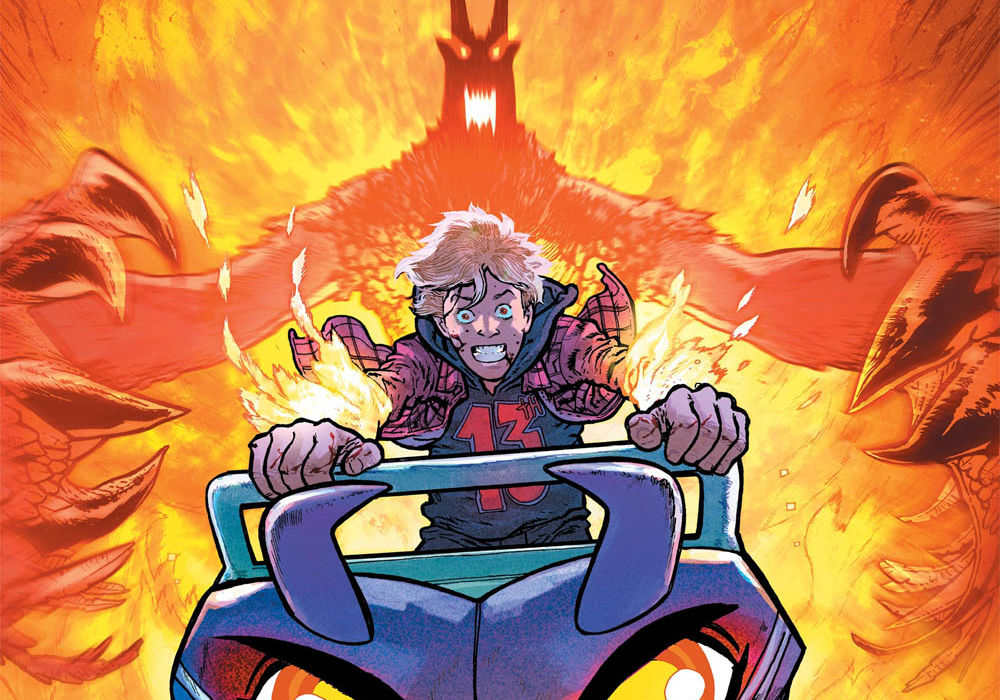 I am delighted to report that “Dark Ride” is good. It’s really good. In the span of the first issue, we are breathlessly taken across the breadth of the story. Set up like a good TV pilot, “Dark Ride” #1 introduces a wide ensemble of characters and teases their hidden depths. But it’s not a TV pilot. This is a comic through and through, created by absolute pros. 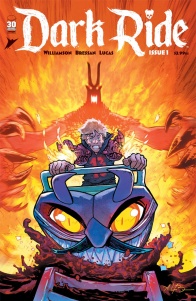 WELCOME TO THE SCARIEST PLACE ON EARTH!? Devil Land has been the world’s premiere horror-themed amusement park for over 50 years, home to the scariest ride ever created – The Devil’s Due.?

But when lifelong fan Owen Seasons begins his first day on the job, he will discover the true horrors happening behind the scenes, the truth about the park’s reclusive creator Arthur Dante, and that the job of his dreams might just be a living nightmare.

Upon seeing the solicit, “Dark Ride” made me somewhat curious. Maybe a little excited? The premise was sort of enticing- what if there was a haunted amusement park? But that’s not really a story, it’s a setting. But writer and co-creator Joshua Williamson certainly knows how to tell a good story. What I wasn’t expecting is how personal it all would feel.

“Dark Ride” opens with a black and white prologue. An awful man murders his wife, and buries her 45 miles outside of Vegas. But then a spooky voice (lettered in a nauseatingly wavy orange text by Pat Brosseau) promises as Faustian pact and bam, cut to present day where Devil Land is a world famous horror themed amusement park. We follow a new employee, Owen, as he gets oriented on his first day working at the park (which mostly involves cleaning up vomit).

I knew that Williamson could write a good horror comic. I’m especially a fan of “Nailbiter.” But what I did not know, is that he’s a coaster-head. Is that the correct term? I clearly am not one of those people, though I have dabbled in that world. We’re talking about people who love the stories behind amusement parks, from the history of how the rides were built to the lore and legends spread by former employees. These people watch documentaries, listen to Podcast: The Ride, and take in as much of this stuff as possible.

All of that lends a deep specificity to “Dark Ride.” Not only is Williamson a fan, it’s pretty clear that he’s thought about the logistics of a horror themed amusement park for a long time. There are the guys in the control room, who feel an awful lot like Jurassic Park or Westworld. They need to break up couples having sex at least once a day, and have even had to vacuum up human ashes, dumped in the park by some horror loving freak. Then there are the park mascots who uh, are pretty clearly actual demonic beings. We overhear conversations about the park as a struggling business. Williamson has thought about the challenge of marketing a haunted themed amusement park (which is actually haunted).

I don’t know if he’s a coaster-head, but Andrei Bressan draws the hell out of this. That black and white opener has such good moody shadows. Those demonic mascots land in the perfect cute-or-creepy zone. The splash page of the whole park is one of those breathtaking landscapes that you need to study for minutes. And when that same image is used to give you a park map, that’s the good stuff.

The real alchemy though, is the team working together. “Dark Ride” is impeccably paced. The panels are simple, mostly 8-panel grids, or 4 horizontal panel pages. Most of these panels have just a single word balloon of text. If there needs to be a longer expository speech, the panels stretch out, giving the text enough room to breathe. And Bressan fills every one of those panels with detail, so you are rewarded for finding clues. At least, I’m assuming we’ll be rewarded. “Nailbiter” turned into a labyrinthine mystery, piling on twist after twist. But “Dark Ride” #1 sets the boundaries of its world both in time (from the murder to the park in present day) and space (so far the story has taken place almost completely in the park).

None of this even mentions the fractured Dante family, the surviving murderous husband from the prologue and his terrible entitled kids. It’s actually kind of incredible to look back on how much is covered in this first issue, considering how quickly you turn the pages. I don’t think “Dark Ride” is going for the crown of the deepest most artistically nuanced comic ever made. It’s shooting for horror fun and it’s fun. Its really fun. I think this just went on my Image must-read list.

Final Verdict: 9.2 – I had high hopes for “Dark Ride,” and it absolutely exceeded them.