The first flame fades and darkness sweeps across the land, bringing the unending nightmare of life to the accursed undead that roam the wastes of civilisation. No, wait… that’s Dark Souls the game.

This is “Dark Souls” the comic… a comic that really wants to be about Dungeons & Dragons. 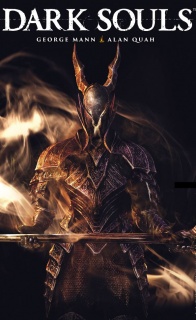 Written by George Mann
Illustrated by Alan Quar
Welcome to the world of Dark Souls; a landscape bathed in arcane fantasy, where primordial forces govern the tides of time, bonfires flicker in the darkness, and the undead stalk the earth in search of impossible redemption. From Titan Comics and Doctor Who scribe, George Mann, comes this original tale of adventure and visceral horror that throws readers deep into the twisted myth of Namco-Bandai’s award-winning video-game franchise.

Dark Souls, much like Minecraft in a sick and twisted way, is a game whose popularity spread through word of mouth and grew entirely because it was something wholly unique in the games industry (which is something that doesn’t happen often) and is now at a point where the fandom surrounding the game is set to swallow what makes the game actually good. Chances are you know Dark Souls because it’s difficult. It is one of the more legitimately difficult games to come out in recent years. Its reputation is, of course, highly exaggerated and mostly only seen as difficult in comparison to games that hold the players hand throughout with simple tutorials and very shallow learning curves. However, that’s not what makes it so special. Not to me, at least.

What makes the Dark Souls games so special is the lore. The storytelling by Hidetaka Miyazaki is subtle in some ways and outright obtuse in others. The games are dripping with atmosphere, symbolism, and snippets hinting at a story much larger than the one the player is playing through. It is a bleak world in which one of the major mechanics of the game – the endless respawning the player goes through every time they die – serves as a metaphor for depression, for meeting an obstacle in life and throwing yourself at it until finally you break past it and can resume your journey, until you’re blocked by the next obstacle. It’s a love letter to “Berserk”, a manga that Miyazaki clearly loves, which blends medieval fantasy with dark storytelling that peers into the depths of humanity and explores the notions of inherent good and evil.

It is, through and through, one of the most unique storytelling experiences in video games where much of the subtlety and symbolism was mined and shared by the community surrounding the game.

“Dark Souls” #1 doesn’t understand Dark Souls. Now, I was hesitant going into this comic because I couldn’t fathom how someone could translate that level of storytelling and feeling of the game’s world to comic, but I hadn’t accounted for what they actually went with: to not even bother. Now, I don’t hate this comic. In fact, the actual writing and artwork on display here would be pretty good… if it wasn’t called “Dark Souls”.

Alan Quar is probably the standout talent here. The painted artwork is actually gorgeous. The crystalline labyrinth setting  did remind me of Crystal Caves. He captures a certain sense of the medieval fantasy the game is known for while keeping it in his style. The characters, especially, are an excellent element to the artwork as they feel real and expressive and filled with detail. The layouts of the comics, using the almost light gold border panels, employ amazing storytelling (something that can be lost with painted artwork) and one double page splash that renders painful memories flooding into the mind of the protagonist in shattering glass is gorgeous.

The writing by George Mann, meanwhile, creates a solid introduction to the two main characters and their quest. It balances action with drama and characterization while establishing the fantasy world this story takes place in. The banter between the two character is lively and you get a pretty good sense of who they are and their unique relationship, as our main character has a deteriorating memory and must rely on the other character to keep her straight. This allows Mann to weave certain expository elements intoto the dialogue pretty naturally.

However. All those compliments I can level at the book are unfortunately major strikes against it here simply for the fact that none of the elements feel like an attempt to capture the tone of the game. Surely if it has “Dark Souls” as the title it should feel at least a little like Dark Souls, right? And if it can’t adapt the challenge of the game or the sparse storytelling to the comic medium, surely it should attempt to capture the bleakness of the world and its characters and the journey to create meaning in a world where nothing ever seems to change. Instead, Mann and Quar seem to have created a comic that wouldn’t have felt out of place with Dungeons & Dragons as the title.

“Dark Souls” #1 doesn’t have any of the dark fantasy trappings of Miyazaki’s visions or the attempt to translate authentic medieval combat or the sparse, obscure storytelling that focuses on bringing the world to life in snippets through characters that are intriguing and haunting. This is an action-oriented high fantasy comic that, while it boasts talent and promise, pales in comparison to the legacy of its title. This feels like a comic that should be named literally anything other than “Dark Souls”. The writing from George Mann is too lively and the artwork from Alan Quar is too bright to really live up to the tone of the original work and that’s a complaint I never thought I’d have. But if you’re gonna adapt something like Dark Souls you should at least strive to capture something that makes it so beloved. This isn’t a bad comic, it’s just a bad “Dark Souls” comic.

Final Verdict: 6.0 – I’m being generous here because this could have been a great comic if it didn’t have the baggage of its title to contend with. If you really want a Dark Souls comic, though, seek out “Berserk”.