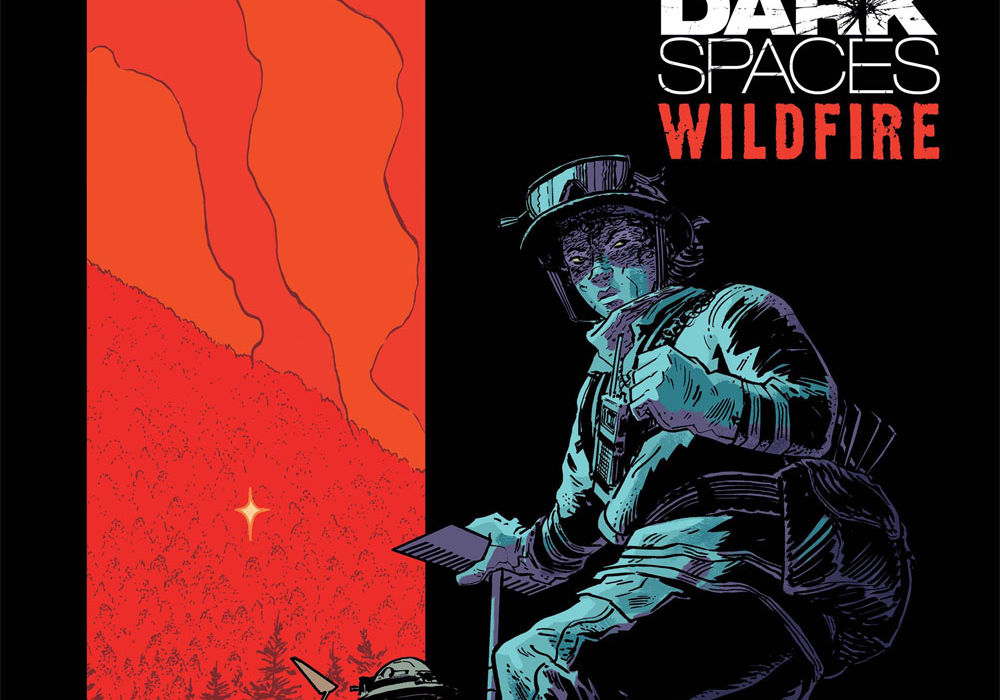 Earlier this spring we caught wind of IDW’s plans to drop nine new, all original stories over the course the summer and coming year. This is a big move, and it looks like IDW is trying to build a lot of hype around these new slate of stories. Today we’re reviewing the first of these stories, “Dark Spaces: Wildfire” #1. Scott Snyder is at the helm of this one, which is sure to turn some heads and draw attention. But it’s far from a one-man show: Hayden Sherman and Ronda Pattison, as we’ll see, do some heavy lifting as well. Let’s dive into this one, shall we? Six weeks into the slow burn of the historic Arroyo Fire, a crew of women from an inmate firefighting program are risking everything on the frontlines when their newest recruit—a white-collar convict with a deep network of shady dealers—discovers they’re mere miles from her crooked former associate’s mansion. When she proposes a plan to abandon their duties and hunt for riches under cover of smoke and ash, the team must decide if they’re ready to jeopardize their one sure path back to normalcy for a shot at a score that would change their lives…

“Dark Spaces: Wildfire” #1 has a strong premise that burns with latent potential. Ma, the brooding, stalwart commanding officer of an all-female crew of prisoner firefighters has her mettle tested when one of the crew suggests using the current forest fire they’re battling as cover for a ballsy heist. Masked by the incoming fire, they’ll be free to get away with the goods under the cover of the inferno’s chaos. This is just the barebones of it, and embedded in that premise is a well woven tapestry of backstories, motivations, and risks. It’s worth noting that this story is moody and serious — this is no hokey heist or Rube Goldberg Machine concoction of Home Alone style gags.

“Dark Spaces: Wildfire” #1 doesn’t even get to the heist itself, other than through some foreboding, murky flashforwards that promise calamity. This story, ironically, is a slow burn. Our first issue gives us character introductions and sweeping views of the landscape (more on that later) that whet our appetite for as strong story to come. We also get a deep dive into the details around prisoner firefighter crews and the specifically the roles each member takes on when fighting a fire. There’s someone at the lead of the pack, felling trees, another person scouting, calling strategy, a commanding officer, and so on. It’s clear that a lot of research went into designing “Dark Spaces: Wildfire #1.” Additionally, these roles integrate well into the heist set-up, and also provide cornerstones for character personality early on. While we don’t learn much about everyone in “Dark Spaces: Wildfire #1,” we’re given just enough detail to keep us pulled in. There’s a lot of exposition here, but Snyder is deft enough with the pen that it all feels engrossing and not at all clunky. The premise of “Dark Spaces: Wildfire” #1 makes sense, and the contemporary setting of a burning California lends a plausibility to the story, which gives us more buy-in, and brings us closer to the characters. The story is also subtle in its political underpinnings, meaning the anti-capitalist, anti-patriarchal messaging is there, but it’s not ham-fisted or awkward at all.

So, we’ve established that “Dark Spaces: Wildfire” #1 is an engrossing story — but that’s only half of it. We absolutely must talk about what’s going on in the art department. Your intuition might be that a story about wildfire firefighters would be full of blacks and grays with lots of red — I mean, we’ve all seen these blazes on TV, they’re astounding and brutal. A realistic color approach could have worked for this story, although the color palette could have gotten oppressive quickly. Sherman and Pattison take a different route for “Dark Spaces: Wildfire” #1 and we’re so glad they did.

Pattison’s color palette is somewhat surreal, full of dark purples, blues, yellows, oranges and reds. There aren’t that many greens here, but neither is there a lot of black and white. The colors feel moody, otherworldly, yet with a tinge of verisimilitude (after all, fires and smoke pollution do make skies and sunsets kinda purple and funky). The color palette feels both aesthetically pleasing and a little oppressive, which makes sense given the subject matter. But it does more than that. The surrealist nature of colors matches the premise of the story, and align with the somewhat absurd nature of the the crew’s situation: they’re prisoners forced to fight fires, working long hours for little gratitude and even less money, making pennies on the hour when all is said and done. They’re extremely isolated and alienated from the rest of the world, in a similar way this color palette feels alien and strange. It’s brilliant, really.

Sherman’s art is also stellar in “Dark Spaces: Wildfire” #1. He’s capable of sweeping, landscape wide shots and close-up, contemplative character studies. Each member of the crew has a similar outfit given their work, but he does a lot of work to cameo each of their appearances and visual styles. Heavy use of crosshatching adds to the grittiness of the story and helps add definition to the chaos of the firefights. The panel design here is also exquisite, and we get really good uses of alternative panel shapes, full page images, close-ups on micro details, and good uses of perspective that parallel the drama in the narrative. This is really just a masterclass of visual storytelling, and is worth lauding.

All in all, IDW’s new foray into originals is off to an excellent start. “Dark Spaces: Wildfire #1” combines a well conceptualized story with a nearly pitch perfect execution. Everyone’s firing on full cylinders for this one. If you’re one for more serious, contemporary dramas with a little bit of action and a whole lot of character, throw this on your pull list and put your feet to the fire.

Final Verdict: 9.3. Smoldering and fierce, this is a revelatory entry into the heist genre that any serious comics enjoyer should pick up.