As detailed last week, I’m going to close out my Clone Wars reviews with looking at the various bits of ephemera that trickled out from the ashes of the series’ cancellation. First up, “Darth Maul: Son of Dathomir,” a four issue miniseries that was originally published by Dark Horse but now, like all Star Wars comics, resides at Marvel. 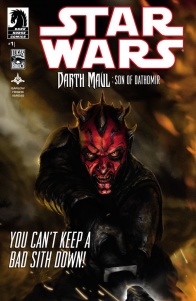 Getting cut in half by Obi-Wan Kenobi and being rejected by his former Sith Master Darth Sidious isn’t going to defeat Darth Maul. In fact, it only makes him mad enough to take on the galaxy—with an army of Mandalorians~

After forming the Shadow Collective—a criminal organization composed of the Hutts, Black Sun, the Mandalorians, and the fearsome Nightbrothers—Maul wages war against Darth Sidious and his generals, Count Dooku and General Grievous!

Adapted from unproduced screenplays for Season 6 of The Clone Wars television show, this is the final chapter planned for Darth Maul’s saga!

1. A balance between authenticity and storytelling

One of the difficulties in adapting any piece of media into something else is that you have to make sacrifices to the medium. For instance, I’m sure a fair amount of the screenplays for these four episodes involved cool lightsaber duels and space dog fights. Those things play far better on screen than they do on the page, and so there has to be some concessions made in that area to make for a better comic.

Similarly, there is a consistency to computer-based animation that simply isn’t possible in a hand-drawn comic, and so there are a few moments of “wait, is that supposed to be…” throughout the issue. Juan Frigeri draws Count Dooku about 20 years younger than Christopher Lee, and far less rigid than he was animated on The Clone Wars, for instance. General Grievous looks really quite different here than in anything else he’s shown up in over the years.

Aesthetics aside, those visual differences don’t hinder the storytelling, so they are simply superficial moments rather than things that take you out of the story. I would much rather someone stylizing the characters in their own way than attempting photorealism in ways that don’t really work.

That said, I think Dooku would’ve killed for the hairline that Frigeri gives him.

One of the ways that the sixth season of The Clone Wars really helped me, personally, understand the Sith was the explanation of the ‘Rule of 2.’ The backstabbing and bitterness that seems to come along with being a Sith is on perfect display in Sidious. While a lot of the deception was fake (more on that later), this series did a great job showing just how mercenary he is. Not only that, but how well he has played his cards. If either Grevious or Dooku died, it would’ve been even better for Sidious, who could’ve used the politics of the victory in his role as chancellor.

While the solicit promises the ‘final chapter’ of Maul’s saga, we know that’s horseshit. This series, in particular, leaves him in a place where he is back on his heels, and has pissed off a fair amount of the underworld. The next time, chronologically, we see him is at the end of Solo, which appears to be about 8-10 years after this, and by then he has not just built up his underworld power, but has surpassed it. Maul couldn’t have gotten from The Clone Wars to Solo as cleanly without these episodes as a bridge.

4. You’ve got to have a mother for me

Mother Talzin seemingly meets her end here (although who really knows), but I want to pour one out for our dearly departed mama. The idea of magic is still a somewhat under-represented idea in Star Wars media, with really only the Nightsisters being truly magical thus far. Now, that might seem odd – there’s plenty of sci-fi/fantasy franchises without magic – but no one really talks about Talzin and the Nightsisters like they are the only magic users in the galaxy.

I would love more of a discussion of the theology that falls within Star Wars; do magic users use the Force? Is it something else? Is it compatible with the Jedi teachings? Is it just another word for the Dark Side? I’m really curious as to how it all fits together.

This series had more double crosses than a bad WWE angle. As I mentioned before, a lot of this is orchestrated by Palpatine, but you can get whiplash from trying to remember who is with who at any given moment. Maul turns Dooku to his side; or does he? Dooku then turns on Maul, but then is possessed by Mother Talzin. C’mon, comic! Give us some less confusing sides next time, please.

Eleven Thoughts on Star Wars: The Clone Wars‘ “Shattered” and “Victory and Death”

The end is here. The Clone War, and The Clone Wars, is over, and there is nothing left to do but marvel at how Dave Filoni and co. have absolutely stuck the landing for the series, across three platforms and seven seasons. There’s a lot to say, so let’s dig in. As has been the […]

As we discussed last week, The Clone Wars is kicking it up into high fear for its final arc. Let’s not waste any more time. 1. Battle of the apprentices who walked awayAlthough Maul vs Obi-Wan has been identified as the big conflict in the Filoni corner of Star Wars, Maul and Ahsoka are really […]

Well, it only took eight episodes, but The Clone Wars has finally come to what we’ve all been waiting for, and Dave Filoni and co. knew exactly how big of a deal this episode was, from its very first frame. Let’s dig in, but note that point five is full of spoilers for Star Wars: […]