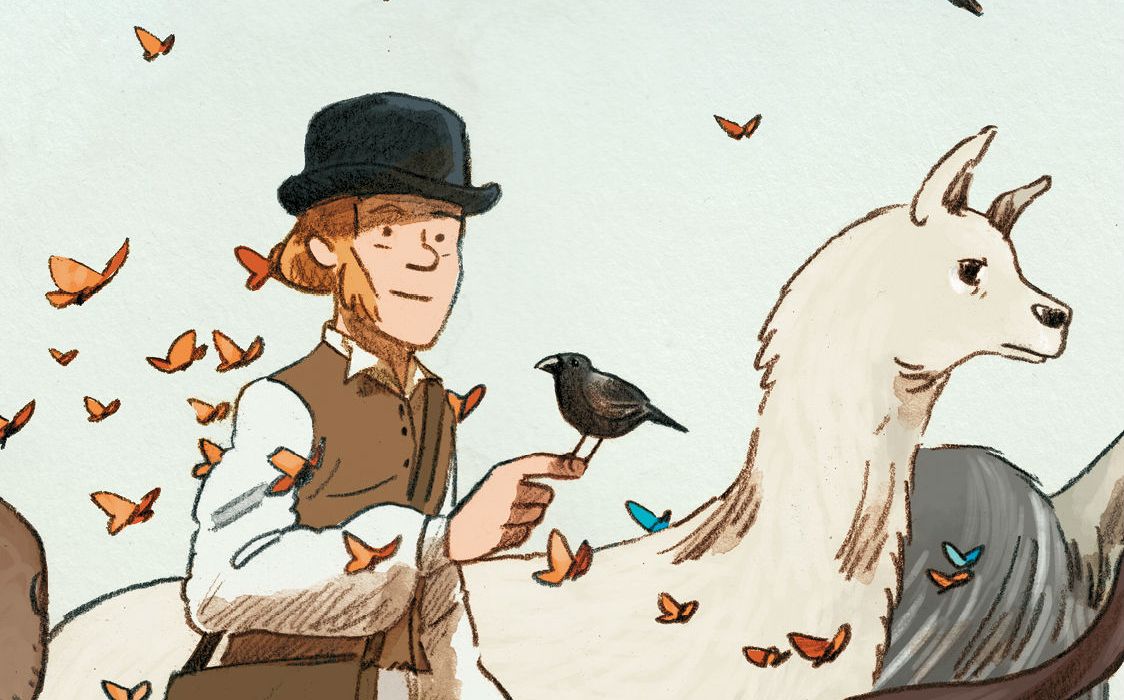 Before Charles Darwin was a titan of science and a bearded symbol of progress, he was a wide-eyed young man who set out on a simple journey. History often notes his years from 1831 to 1836 on the H.M.S. Beagle as nothing but a precursor to his later theory of evolution, but it was so much more than that: it was a raw adventure that took Darwin around the world, as thrilling as anything from Jules Verne. In “Darwin: An Exceptional Voyage,” writer Fabian Grolleau and artist Jérémie Royer have created a comic that shows the entirety of this young, beardless man’s exciting voyage. 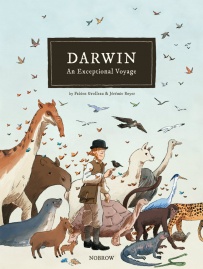 It is the year 1831. A gifted but distracted young man named Charles Darwin has been offered a place aboard the H.M.S. Beagle, in a chain of events that will change both his life and the course of modern science. Join him on an epic journey of thrilling discovery as he explores remote corners of the natural world and pieces together the very beginnings of his revolutionary theory of evolution.

Darwin’s memoir of the journey, The Voyage of the Beagle, is an exciting book that talks as much about the native people, foreign culture, and Gauchos (legendary South American horsemen) as it did about the geology and biology it’s most well-known. Grolleau and Royers capture the entire story and include many of the more famous moments of his voyage, such as Darwin tripping over his own bolos, unearthing the bones of the extinct megatherium, and, of course, collecting beetles.

This isn’t new ground for Grolleau and Royers. They teamed up in 2016 to write “Audubon: On the Wings of the World,” about the artistic journey of John James Audubon across America to draw. “Darwin: An Exceptional Voyage” is similarly about a man on a voyage, but this man, his findings, and this comic are far more ambitious.

In the introduction Grolleau tells us that this is a “subjective, perhaps even romanticized vision of Darwin’s voyage,” and then he frames the story as a tale an older Darwin is telling to his children. We’re being told twice over not look too closely at the truth of the matter, but it’s a warning I don’t think we need. The story of Darwin’s time on and off the H.M.S Beagle is largely from his own subjective memoir of the voyage, “Journal and Remarks,” which he later revised as his views on evolution firmed up. Grolleau adds color to the story from Captain’s FitzRoy’s own account of the voyage, which FitzRoy also revised when he became more religious. The truth was already quite fickle without Grolleau’s words of warning.

The concluding remarks brings the idea of truth around again with a few summary notes from the writer on the fate of some characters, and Darwin’s beliefs, but, again, it’s unnecessary. Darwin’s views on slavery and civilization come across quite accurately, for better or for worse, in the comic, and the few notes about his companions could have been easily covered in the pages of the comic.

It’s not just the facts and stories that Royer captures so well. The “romanticised vision” that Grolleau calls out in the introduction isn’t just about the rose-colored nature of truthfulness in biographies, it’s also about the romance of discovery and the sheer joy of scientific inquiry. We follow the personal journey of Darwin from a prospective clergyman to a lifelong scientist. In every page we see his doe-eyed face staring intently at everything he’s discovering.

That joy is completely due to artist Jérémie Royer, who comes straight from the “Tintin” school of ligne claire euro-comics. Every line, panel, and border is clean and clear, and the colors vibrantly paint the vegetation, earth, sky, and, most importantly, Darwin. This is his story, and his shining face is beaming right at us in nearly every page. Royer has become a more adept artist since “Audubon.” That comic, from 2016, rarely breaks out from its very uniform layouts, where “Darwin” frequently uses whichever layout is best for the moment, from vertical layouts to show the heights of the Brazilian rainforest, to inset panels honing in on small plants, and full-page spreads that show off the dazzling diversity of life on land and under the sea.

The Voyage of the Beagle has had many adaptations, but they mostly focus on the natural sciences of biology and geology, and many even leave out the latter. “Darwin: An Exceptional Voyage” tells the entire story of this voyage, from the joys of encountering new species to the unbowdlerized tales of slavery and war, and those tales are a very important thread in this story. A grandchild of the enlightenment, Darwin was a strident opponent to slavery and a strong believer in the benefits of civilization. He was dismayed to see savagery and atrocities throughout his travels. Darwin hears an awful story in Brazil about an island of escaped slaves that were slaughtered, and he muses that if this had happened in ancient Greece it would be sung about in opera houses, but since it happened in Brazil it is simply forgotten. His knowledge of the old age of the planet and how geology and life has changed all intertwines with his views on the races of man and the positive qualities of civilization.

This comic is an abridged adaptation of the book, but of course it includes his mental leap at the Galapagos, those young, volcanic islands straddling the equator. Royes shows this by adapting a renowned drawing of finches that John Gould originally drew in 1845 for the second edition of “The Voyage of the Beagle,” where each finch’s beak is clearly adapted for a specific environment. It’s a nice touch, and if I have a criticism of this book, it’s that Royes didn’t adapt more drawings and sketches from the old books. Though Darwin’s didn’t draw his tree of life until his later journals, it would have been a small step to include it in this romanticized version of the story.

At the end of the book Darwin meets with the astronomer John Herschel, who talks about the stars and vast distance of space, while Darwin talks about the dizzying reaches of time. Grolleau and Royes connect everything Darwin has thought on his voyages: his views on the rise of civilizations and mankind, the slow march of geological changes, and his still-gestating theory of evolution, in an epic synthesis of Darwin’s beliefs.

“Darwin: An Exceptional Voyage” is a beautiful work, one of the most faithful adaptations I’ve read, and, like the original, an inspiring work for any budding scientist.