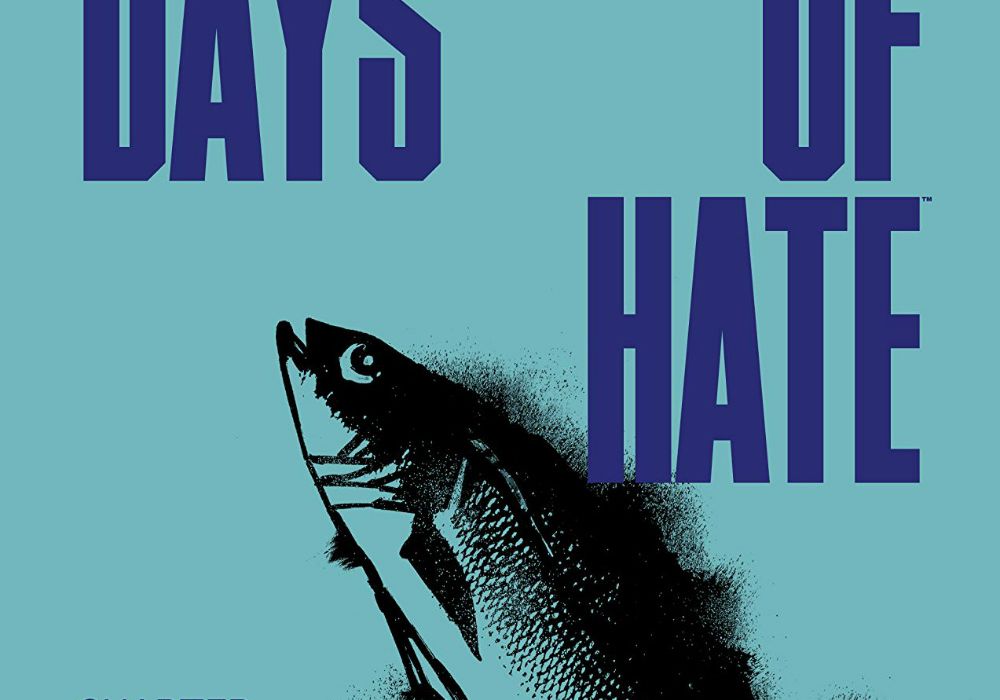 With “Days of Hate” #6, the series reaches its halfway point and its story of violence and tragedy seems to just be getting started. Read on for our review, though be careful, as it contains spoilers. 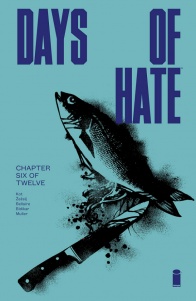 Reading “Days of Hate” is, more than anything else, a state of mind. It’s the lingering sense of dread always sitting at the back of your skull that something in our society has gone terribly wrong, but that it’s too late now to change it. That there is an entire world out there that is falling apart, but there aren’t enough people to fight against it. It’s the feeling that the fight itself might be futile, but that it’s still worth fighting. It is this political moment, distilled into words and images.

Throughout this issue, Ales Kot shows the variety of modes he is able to operate in for this series. The first is an intimate text conversation between two of the main characters, Amanda and Huain, before they are forced to destroy their phones. The desperation and deep intimacy that Kot is able to portray between these two, through just a few text messages, is really beautiful, and sets the stage for the rest of the issue. As much as this is a story about the political moment, it is also a story about people. People coming together, being torn apart, and reaching out into the darkness for some kind of human connection.

After the opening pages, the issue moves into two, parallel narratives. The current story, with Amanda and Arvid hiding out in the woods, while Peter Freeman, the man who has been hunting them, sits in a hotel room dealing with the disaster of his operation trying to catch them from the previous issue. Woven into the machinations of these characters in the modern-day are pages of nine panel grids that give us the back story of Amanda and Huian.

The flashback pages, where we get the history between these two from their own perspective, are really, truly beautiful. The images, whether it is the two of them in their bed together, or just seeing each other on the street, are rendered by Danijel Zezelj with such intimacy. Zezelj’s is able to portray the smallest moments between the two of them, the look in their eyes, the way their lips and bodies come together, the beauty of a hand interlacing its fingers with another, in such a way that you can feel the connection between the characters. On top of this, Jordie Bellaire brings a color palette of neon pinks and blues to Amanda and Huian whenever the two of them are together. This makes these moments stand out from the rest of the book, pop against the drab browns and greys of the present. Over these images, Kot writes out their history in what is almost a stream of consciousness prose poem, pulling you into the frantic, heart racing feelings that love, or a real human connection can create. These pages, and the contrast between them and the rest of the book, show what love can feel like, even when the world is falling apart around you.

The present-day parts of the story are also interestingly structured. “Days of Hate” #6 has pages where we watch nothing but the expression on a person’s face wordlessly change, followed by pages with almost all their real-estate taken up by word balloons. This gives Zezelj the space to really show us the intricacies of the character work he is doing. His heavily inked lines bring a sense of tragedy to even the smallest moments. There is a page in this issue where the only action that happens is a man looks down and rubs his mouth. But, this willingness to slow down, to take the time to breathe, is part of what makes this series so compelling. While it is certainly a book that deals with violence and action against the government, that it is willing to take the time for these tiny moments is part of what makes it such a powerful experience.

And somehow, I’ve made it this far into the review and only barely touched on the coloring. Bellaire does a great job setting the tone of the series. I mentioned how her colors contribute to the feeling of the flashbacks, but they also bring a sense of place and feeling to each of the scenes in the issue. There is an apartment in the city that is full of different varieties of grey, an autumn forest that slowly drifts into twilight as the characters there come under attack, going from the orange of the trees to silhouettes in bright yellow. Bellaire’s colors bring the heavy lines of Zezelj’s artwork to life, making every panel in “Days of Hate” #6 look fantastic.

“Days of Hate” is not a book made for everyone, which is frankly part of the appeal. If you have made it this far in the series, you probably know if it is for you. It wears its politics on its sleeve, and if you don’t agree with those politics, I can imagine that it is a frustrating book to read. But, I also don’t think the creative team cares if they frustrate readers that might think this book is an overreaction. After all, we are living in a world in which the United States government is tearing children from their parents before throwing them into cages. There is something refreshing about a book that is willing to commit so completely to its politics.

Every piece of this issue is so strong individually, and even stronger together. “Days of Hate” #6 is an issue made up of prose poems, long pauses, and then monologues. It shouldn’t work, but it does. This is a series that I cannot get out of my brain. Like I said in the opening, “Days of Hate” is like a state of mind. A state of mind that, with the world the way it is, I cannot shake. Every issue sticks with me long after I finish reading it, and “Days of Hate” #6 is no exception.

Final Verdict: 9.0 – “Days of Hate” #6 shows once again why this series is one of the most compelling books being sold today.