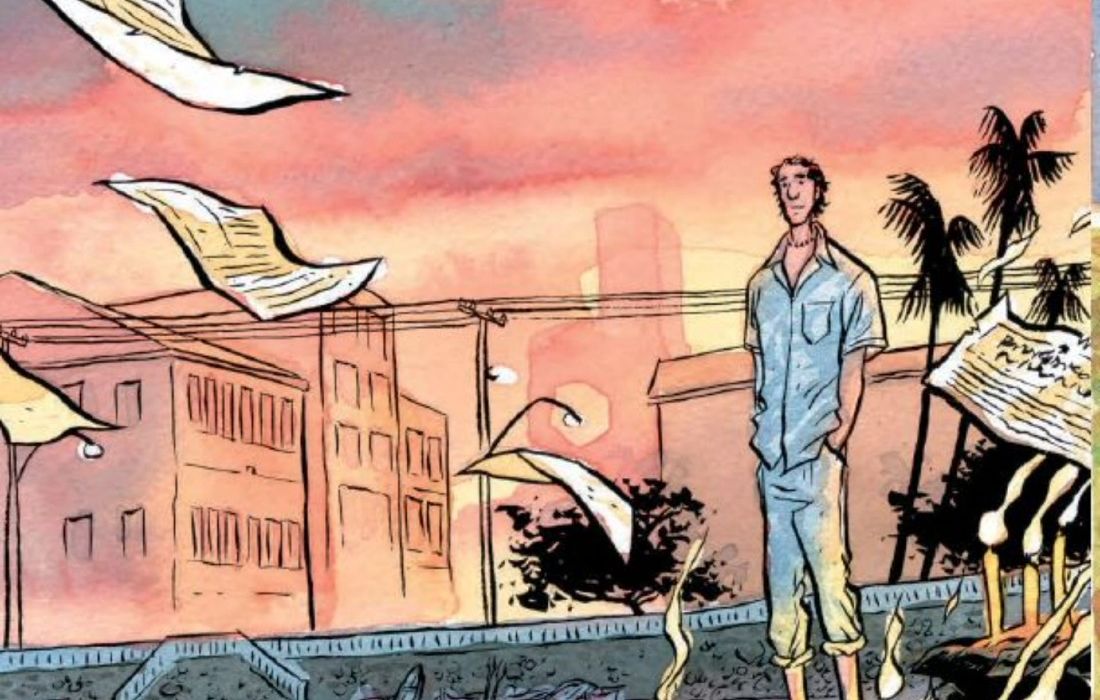 It’s hard to believe that “Daytripper” first premiered ten years ago in its original ten issue format before being collected in both a trade paperback and simply stunning deluxe hardcover edition. Fábio Moon & Gabriel Bá’s masterpiece of life, death, and everything in between is still as poignant and beautiful as it has ever been. 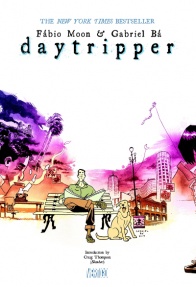 Daytripper follows the story of Brás de Oliva Domingos. The son of a famous Brazilian writer, Brás is an obituary writer who is looking to find his own voice as a novelist, but his story isn’t a typical one. With death constantly on his mind, he can sometimes find it hard to focus on what’s important in life. All at once, he is both telling us his story and a the hapless victim of time and circumstance. The format of this story is that each chapter focuses on a specific day at a different age in his life.

Raising questions like what are the most important days of our lives, will we realize these days when they come, and when do our lives actually start? Is it the days that we fall in love, have a child, witness the death of a loved one? The narrative of “Daytripper” shows us all these moments and more, but with one big twist – we see Bras’s death at the end of each of these days. Only for us to find him, alive and well, at a different age in the next chapter.

Outside of this mind twisting narrative everything that happens to Brás is exactly something that could happen to any one of us and that is where the power of this story comes from. While the events, are of course tied directly to Brás’s life, but anyone can relate to these moments. It is these moments and the strength of the writing that makes this story work so perfectly. You can talk all day about what happens in each chapter, but it’s how these important life moments are written. As one unfolds into the next with these death ellipses in between is what makes this a book that needs to be read and experienced rather than summarized or dictated. This is one of those limited series that truly can not be done justice simply by talking about it.

The writing is honest and downright perfect. The way these characters speak to each other is nothing short of truthful and realistic, even when scenarios move into the dramatic, the emotions at play are very easy to relate to. When Bras feels love, guilt, pain, heartache, anything; we feel it too. There is no other way to say it, the script and artwork reach into your very being and force you to dredge up every damn thing you have lived through. If you aren’t emotionally compromised in one way or another with the turn of each page, you’re either too cynical to live, or simply haven’t lived enough. As we fall further into the rabbit holes of these days, our empathy ratchets up.

Moon and Bá bring their own personal experiences of growing up and living in Brazil to this book that allows readers, most of which, may have never even set foot in the country, get a perfect sense of this place. We can feel its culture through the architecture, the food, the people, especially those closest to him – his family. In the chapters where Bras visits another country or region, we see it through his eyes, through his experiences and it all comes together in a way that is so rarely seen in comics.

The talent on display in both the writing and the artwork is not only something special, but it is even more outstanding when you realize that these two creators put this book together over a decade ago, in their early 30s. Between the quality of this book, and the fact that we see so much of Brás’s life, it is shocking how well these brothers came together to craft this character. Because we see Brás from being a small child to an elderly man, he lived so much more of a life than they even had at that point. So how is it that two 33 year olds were able to create this fully fleshed out man of man ages, and so many realistic characters that come in and out of his life? Incredible talent, understanding the people and world around you on a humanistic level, and there’s that word again: empathy.

Both Moon and Bá have nearly an identical artistic style and while on most books you can see where one begins and the next begins, but this collaborative project is one where I honestly have no idea who did what, without looking for their signature at the bottom of page or cover. Their style changes slightly from book to book, as is the tendency for most artists, but typically they have an loose, kinetic energy to their work that is both exciting, powerful, and occasionally allows finer details to fall to the wayside. However, with “Daytripper” their lines are clean, crisp, it’s all about the details, great and small. Every page, every panel is beautiful. Even if you were to flip through the book without ever taking in a single word, the art mostly speaks for itself. You won’t get all the story specifics, but there is enough there to get the feelings across. Everything about it captures everyday life and a sense of a greater power surrounding everything. It is perfect in its simplicity.

It has been said that Dave Stewart adapts how he colors a book based on both the style of the illustrator and the subject matter at hand. It is something I never thought much about, but when you look at the wide array of story types he has worked on that notion becomes very clear. The first time I read this book, I do not remember knowing that it was Stewart who did the coloring, because it simply did not look like most of the other books I had seen his work in. It was molded to this narrative. It was no longer just his idea for how to color the illustrations. It was his hand taking on a new life to be a part of this style. When you see Stewart’s name on a book, you simply know that the book is going to be colored exactly the way it was meant to be. This book is no different. He simply brings it into existence and you know that it should never be done any other way. This is because he discusses every detail with the authors and illustrators he works with. For this book he implements a gorgeous painterly look. Moving between solid, heavy colors and thinner, watery palettes that bleed into each other. Whichever style he goes for, he absolutely nails it on every page. If you want to guarantee success in the completion of your book’s art, you can’t go wrong with his genius.

This book is a must read. Rarely have I had an experience like this and when I reached the final page, and shut the book for the first time I had no idea how to feel. I re-lived moments in my life, while moving through these chapters of Brás’s. Then there was the added weight of seeing this man, who I had come to love as a friend over the course of reading “Daytripper,” die…over and over. And with each death we love him and his life just a little bit more, so when we do reach the end of this book, whether or not we have seen Bras’s ‘true’ death, it all hurts. Brás is not a perfect hero, he isn’t even all that special. He just, is. He lives his life, he goes to his job, he tries to live up to his father, he tries to write a novel. He falls in and fails at love, he succeeds at love, he has a child, he loses a parent, he loses a friend. We can relate to everything in his life on some level, whether we have personally lived through a similar moment or not.

This series is a 10/10. The writing and art truly come together to create a perfectly cinematic experience. You will feel this in every fiber of your being, it will pierce your heart, and your soul if such a thing exists. It is a comic book for fans and non-fans of the medium. It is the type of story that you can recommend to nearly anyone in your life, no matter who they are or what they are into. It is a rare treasure and while we have seen these ideas in different forms, in different stories, the way these elements are brought together is its own, original thing. It can be hard to write about something you love, it is something I have trouble with every time I want to discuss something I love in such an abstract way.

It is that deep love that is hard to express into a meaningful writing piece, without doing an extremely long deep dive into the ideas and philosophies found in a book such as this, but I hope if nothing else I have motivated you to seek out the book; and I hope you love it as much as I do.