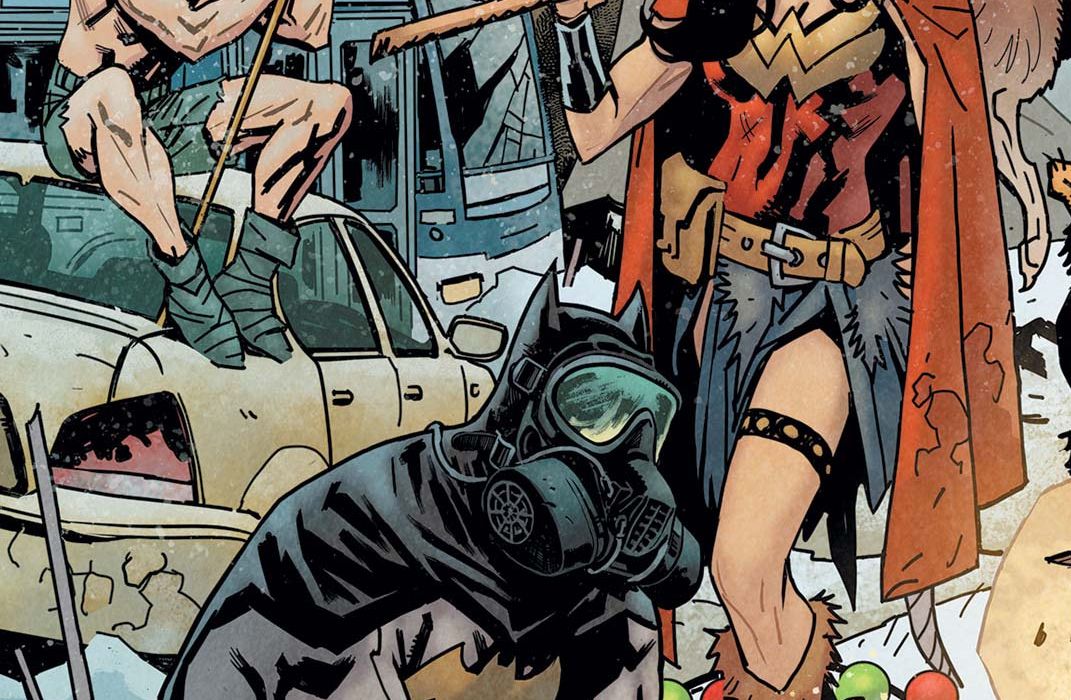 DC is continuing their longstanding tradition of publishing holiday specials this week with “DC Nuclear Winter Special” #1. With the recent trend of DC telling Holiday stories in large anthologies that have lots of stories, will any of the tales in the special stand out? With so many excellent comic book creators at the helm of each title, there’s only one way to find out if the bombastic, 80-page special is worth your hard-earned dollars! 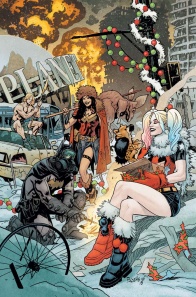 The holidays are tough enough as it is, but when you’re living in a post-apocalyptic wasteland (or, you know, 2018) the world can seem bleaker than ever. So do yourself a favor this holiday season, break out your best eggnog and enjoy 10 all-new stories featuring the World’s Greatest Heroes, including looks at the futures of Batman, Superman and the Flash, as well as many more denizens of the DC Universe.

“DC Nuclear Winter Special” #1 is a really unique special containing lots of personality. The framing device for the story known as ‘The Nuclear Winter Special’ contains author Mark Russell’s bold level of satire. The script melds Russell’s sense of humor with a fascinating and bleak outlook of a post-apocalyptic winter scenario. The entire idea is absurd and looks fantastic thanks to artist Mike Norton’s pencils. Norton assists Russell’s script in evoking a bleak, but witty environment with his expressive characters and sparse backgrounds. The flashbacks towards moments before the nuclear meltdown give a sense of something different, existing outside of the conventional DC environment.

One of the biggest surprises in the special is the return of Damian Wayne as Batman 666. The story, written by Collin Kelly and Jackson Lanzing pokes fun at the hyper-dark tone that writer Grant Morrison initially injected the series with. Kelly and Lanzing add their signature lighter craft to the story but the note comes across as both dark and cheesy at the same time. The story loses momentum when the battle between Batman and Ra’s Al Ghul hits a comedic final note that doesn’t ring true for both characters. While the story teases a few interesting notes up to that final beat, the execution of the tone from a scripting standpoint fell short of the promise of seeing Batman 666 again. Giuseppe Camuncoli did an excellent job striking the balance between the dark initial notes of Damian’s fights and the warmer notes towards the end of the issue. The issue’s great pacing and composition plays to Camuncoli’s strengths as an artist.

The collision between two worlds in the ultra-dense storyline, ‘Memory Hearth’ is one of the best stories in the collection. Writer Steve Orlando finds a fascinating way to bring together “DC One Million” with present-day continuity. The intersection between Superman and J’onn J’onzz is a beautiful, direct story that is made stronger with the creative science fiction elements Orlando brings to the character. This is yet another Grant Morrison concept masterfully explored to the fullest in the collection. Brad Walker’s pencils are another incredible aspect of the issue. The artist has a great handle Kal Kent and Martian Manhunter. Walker draws the “One Million” version of Martian Manhunter with a stoic nature that captures what makes the hero great. From a writing and art standpoint, this is one of the very best contributions to the collection and a great way to tell new stories with these fascinating characters.

In a collection full of great stories, the monotonous ‘Once and Future’ and ‘Where the Light Cannot Reach’ both stick out. These stories are hokey, overwrought and fail to show how both Aquaman and Flash are special and fit in line with the rest of the stories. The Aquaman chapter written by Mairghread Scott and illustrated by Dexter Soy comes off as too serious and self-righteous not fitting in line with the sappy stories in the rest of the collection. The Flash entry written by Jeff Loveness with pencils from Christian Duce suffers from the exact same shortcomings. Both of these entries reveal nothing about the characters we haven’t seen before and are a disappointing addition clashing with the overall optimistic tone for the issue.

While Tom Taylor and Yasmine Putri’s ‘Last Daughters’ was intriguing, it was difficult to make heads or tails of where this story is going. Taylor’s script does an impressive job conveying strong emotions and inverting conventional DC tropes to deliver an intriguing Krypton story. Putri’s art is a really bold addition to the comic, giving a more tangible and definitive sense of detail. The more realistic art comes in to its own when strong emotions are conveyed on the page. Without a strong emotion on the page, the art in the issue can come off as slightly stiff or posed.

‘Last Christmas’ is one of the boldest entries in the collection. The Firestorm storyline is an incredibly creative approach. The issue melds a cliched narrative with a sense of palpable darkness that readers will not expect. The detailed, bold approach to the pencils showed off this story to the full potential. Jerry Ordway’s work in the issue is incredibly detailed, showing off every aspect of clothing and getting all the aspects on the page just right. The Kamandi story, ‘Northern Lights’ features a story with interesting things to say about the heroic nature of Kamandi, showing off his deep relationships with the supporting cast of the story. Phil Hester’s gritty script and pencils are in perfect sync on the page.

Following ‘Last Christmas’ the special immediately loses some of the steam from the first half and never quite manages to find it’s footing again. ‘Nine Lives’ and ‘The Birds of Christmas Past, Present and Future’ are both predictable and feel slight.

“DC Nuclear Winter Special” #1 is by no means a perfect issue or collection of stories. However, there are lots of truly fantastic storylines and creators taking lots of chances. Thanks to Russell’s framing device tying the whole issue together, I’m willing to be a lot more forgiving to the issue. If you are a fan of some of the deep mythology within the DC Universe, I would highly recommend checking in with this special to see some beloved Grant Morrison deep cuts. The Kamandi and Firestorm tales are two more additions to the comic that make the story a can’t-miss installment for fans extremely invested in DC properties. More casual fans of DC should find at least a couple of stories in the collection to celebrate as well.