DC has brought back an old tradition, with their “New Talent Showcase” returning for the first time in 30 years. The book has 9 stories, all that feature folks who have gone through DC’s recently inaugurated Writers and Artists Workshop programs, and each are, essentially, pilots for ongoings/story arcs that don’t exist. 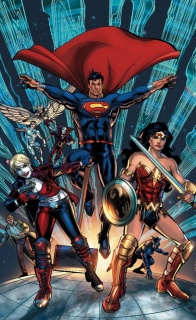 Written and illustrated by various

In this new one-shot, Wonder Woman unleashes her true god of war against a parade of monsters! Superman discovers a new threat that might be bigger and badder than The Joker himself! Hawkgirl solves crimes in the weird weapons unit for the GCPD! Carol Ferris and Kyle Rayner fight about ice cream in space! You’ll find all of this and so much more in NEW TALENT SHOWCASE #1, where recent graduate writers from the inaugural DC Talent Development workshop showcase some of their strongest work yet! See what they’ve learned from masters of the craft Scott Snyder, Jim Lee and Klaus Janson.

Let’s get this out of the way: this is an incredibly flawed collection. Because each story is not a standalone tale, but rather the start of a larger story that doesn’t – and likely, never will – exist, it reads like a collection of pitches, with almost no satisfaction, from a storytelling perspective. Sure, a few of these books would have been ongoings that I would have read and loved, but overall, this just feels like unfinished work. Some of the stories, despite that, shine, while others either feel too incomplete, or just too undercooked, to satisfy at all.

I think the only way to really discuss this book is to do it story by story.

“The Road to Hell and All That,” written by Adam Smith, illustrated by Siya Oum

This is a Constantine and Zatanna story, where Constantine ventures into hell to find the recently deceased Zatarra. His reason for this is a little suspect (to bring him back so he and his daughter can reconcile, but not really to resurrect him I think? Just a quick ‘out of hell’ visit), and the story struggles a little bit to give us a Constantine/Zatanna relationship that feels authentic.

Part of this is because Constantine, especially in the New 52/’Rebirth’ era, has never really been seen to be a man in touch with his emotions. So to see him all of a sudden attempt to be a caring boyfriend, it just seemed unearned and weird. Visually, the story was fine – the ‘hell being a bar’ idea is a bit plyed out, but Oum made it a nice mix of classy joint, dive bar, and literal cave.

The next story is a Wonder Woman story, but it is sort of, kind of, a Wonder Woman/Flash comic? And also, a Wally West as the Flash, but in the Barry Allen suit, comic? And, also, a continuation of the Azzarello/Chiang story of Diana being the God of War? And also, a giant mess?

This was one of the weaker entries in the book for a few reasons: Ayala seems to have a different understanding of who Diana is than is typically ascribed to her, ditto Wally West. This almost felt like a story starring two characters that Ayala had heard about, but never read before. For that reason, it feels disjointed and weird, never really settling into a groove of any kind.

Randolph, on the other hand, does what he does quite well: he creates a kinetic, fun story that made me want to turn the page. But every time I turned it, I was met with a subpar story that just confused me.

No story in this book suffered more because of its format than this Moreci/Bagenda joint. The first half of the story is establishing a villain for the tale that we never see again, and which never connects to the second half of the story. What is especially interesting is that, while I’m not sure of the exact timing, Bagenda gets to draw a more traditional Kyle Rayner story either right before or right after his work on “The Omega Men.” Bagenda is really one of the more underrated artists in comics right now, especially on the cosmic side. His work reminds me a lot of the original Star Wars trilogy, as it is both futuristic and lived in, almost grimy at times.

This story is also hurt by the fact that it takes places at a very specific time in the Lantern books, where Kyle and Carol Ferris were an item, which feels really weird, still, to fans who grew up with Hal and Carol both being a good 20 years older than Kyle. It is hard to read this story and not dwell on tht, for me, although that’s really no fault of Moreci, who writes some cute dialogue between the celebrating couple. This, more than almost anything else, really feels like not a pitch, but the first few pages of an issue. It hurts the story that it isn’t, because it just feels so damn incomplete.

Now this – this is the book I want to read most spinning out of this book. Hawkgirl as a ‘weird weapons’ detective by day, superhero by night? Yup, that’s what I want.

It doesn’t hurt that Sonny Liew, one of the highlights of the ‘DC You’ era of books from last summer with his work on “Doctor Fate,” handles the pencils. The book has a grit and an energy to it that propels the story forward at every turn, even when the story itself is pretty boilerplate superhero as detective story.

Schultz sets up a fun premise, replete with some time jumps, and then lets Liew do the heavy lifting. People so often overwrite stories like this, so it is nice to see Schultz realize how unnecessary that was, and just let the simple story be fun. And fun it is.

It is pretty hard to screw up a Deadman story in my book, and Sebel and Messin do more than just not screw it up – they made it feel really special.

Boston Brand’s voice is perfectly handled by Sebela, who gives the character enough dry wit to choke a horse, and Messina’s style perfectly blended the two parts of Deadman’s world, superheroic and mystical.

There’s no question that Deadman is an underused character, and this story shows why: that moment where he leaps into the car, assumes the thug’s body, and then elbows his bro in the face? You have to love that sort of stuff.

This felt the least like a pilot, and the most like a self-contained story in the whole book.

I get what Khan was trying to do here, and giving Cassie something more to do than just be Wonder Girl, especially in the New 52 era, is an appreciated gesture. But this story just read like a first draft, and a first draft that wasted some damn fine Lupacchino artwork.

This felt rushed, the ‘twist’ was telegraphed, and the attempt at creating some history between the characters fell flat. This was the biggest miss of the whole book, and that’s hard to do after that Wonder Woman/Wally story.

This story had the best art from a creator I was unaware of in the issue. Jung’s work was expressive and fun, and elevated a story that bordered on mediocre to something more special.

The team up between Diana and Selina is one I don’t recall seeing too much of before, and Beeby did a nice job of established an unexpected relationship, one where Diana was afraid of something, was a nice surprise.

Thsi was the story that, based on the description, I was least excited about and, while far from perfect, did a nice job establishing a story I would like to read more from.

“The Man in Black,” written by Michael McMillan, illustrated by Juan Ferreyra

This was a beautifully drawn story, but that should come as no surprise to anyone who knows Ferreyra’s work. His current stuff on “Green Arrow,” plus his past DC work like “Gotham By Midnight” has established him as one of the best DC has in its stable right now. It’s too bad that it was used on this sort of dull Superman/Joker story.

Part of that isn’t McMillan’s fault, because I’ve never liked those characters being paired together. It always feels cheap and wrong somehow, like the Joker is cheating on Batman, as dumb as that sounds. Interestingly, this story is in the ‘Rebirth’ timeline, as Superman mentions his son, Jon.

I like Joelle Jones a lot, but even she couldn’t get me to dig this Harley Quinn story. Harley is the most overplayed character in the DC Universe, and while this story had some fun elements, it ultimately felt like all the other Harley stories: overwrought and short on inspiration.

And that’s a shame, because Lofti and Jones had a nice tone going, something closer to Harley’s time on Batman: The Animtaed Series than where she is now. But, as I said, I’m just not a Harley guy, and this story didn’t change that.

The price tag is also a huge problem here: who’s going to plunk down $8 on a book with no story, no continuation, and a lot of talent that the buyer may not know? Imagine if this, instead, were a free series of web comics – how well would that have gone over? Hell, have the fans vote, and the winning story gets expanded. That’s a much, much more interesting ploy than an overpriced book.

Ultimately, this book was a bit of a tease: it gave the illusion of new stories, but were really just the equivalent of a Saturday Night Live fake commercial: no matter how hard you laugh at the sketch, or how much you love these stories, you still can’t buy the product tomorrow.

Final Verdict: 5.1 – More often than not the format did in the stories.